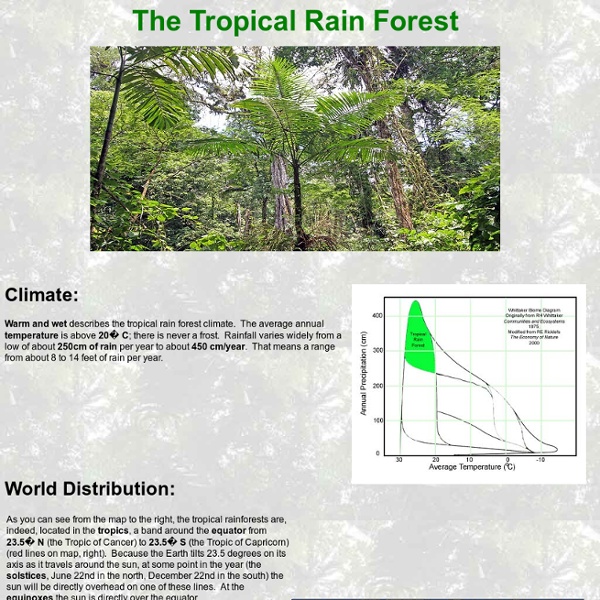 As you can see from the map to the right, the tropical rainforests are, indeed, located in the tropics, a band around the equator from 23.5 N (the Tropic of Cancer) to 23.5 S (the Tropic of Capricorn) (red lines on map, right). Because the Earth tilts 23.5 degrees on its axis as it travels around the sun, at some point in the year (the solstices, June 22nd in the north, December 22nd in the south) the sun will be directly overhead on one of these lines. At the equinoxes the sun is directly over the equator. Within this band, solar radiation is most intense, and thus the surface of the planet warms the most. The warmth leads to a lot of evaporation, and as warm, moist air rises, it cools, the water condenses, and the water falls back to the earth as rain. Thus, the warmest areas of the planet also tend to be the wettest, and this sets the stage for the tropical rain forest. Not all of the land in the tropics is tropical rainforest.

Fact sheet: Tropical Rainforest Animals Where can you find an antelope the size of a rabbit, a snake that can fly, or a spider that eats birds? All in tropical rainforests, of course! Tropical rainforests are home to the largest and the smallest, the loudest and the quietest of all land animals, as well as some of the most dangerous, most beautiful, most endearing and strangest looking animals on earth. You've probably heard of some of them: jaguars, toucans, parrots, gorillas, and tarantulas all make their home in tropical rainforests. But have you ever heard of the aye-aye?

Earth Floor: Biomes Tropical Rainforest: Plants Although tropical rainforests receive 12 hours of sunlight daily, less than 2% of that sunlight ever reaches the ground. The tropical rainforest has dense vegetation, often forming three different layers--the canopy, the understory, and the ground layer. Frequently, people think of the tropical rainforest as a "jungle" where plant growth is dense even at ground level. However, the canopy created by the tall trees (100-120 feet) and the understory, prevents sunlight from reaching the ground. The soil is, therefore, always shaded, and very little vegetation is able to survive at ground level. Vegetation can become dense at ground level near riverbanks and on hillsides.

The average temperature in the rainforest is about 30C, 80F it changer very l... Tropical Rainforest The rainforest that we have chosen to do our project on is in and is called the Amazon Rainforest. You can see on the picture in the upper left corner that the Amazon is the dark green area on the map. This zone which covers much of the northern half of that is east of the and north of the which centers at the equator.

Ten Amazing Rainforest Plants Our surroundings are sometimes taken for granted. Even something as unique as the rainforest is forgotten. It seems a little bit of knowledge and a shove in the right direction can get people to appreciate the environment. So, why not start with the wonder that is the rainforest? Even though rainforests only cover less than two percent of the Earth’s entire surface area, they are home to 50 percent of the plants and animals. They are also found on every continent, except Antarctica. Rainforests Facts Facts about Rainforests Do you know how many tropical rainforest plants have been identified as having anti-cancer properties? Or how many continents around the world contain rainforests? And just how quickly are the world's rainforests disappearing? Find out the answers to these questions and more as you check out these interesting rainforest facts! And when you think that you know all there is to know about the rainforest, test your knowledge with our rainforest quiz.

Top 10 facts about the Amazon Rainforest The Amazon is synonymous with Central and South America – it’s the largest of the rainforests, supporting a huge number of plants and animals and hugely important to our own survival. Taking up most of the Amazon Basin, the Amazon rainforest is mostly contained within Brazil, and stretches into Peru, Ecuador, Bolivia, and smaller parts in some other South American countries. Here are ten interesting facts about the Amazon (and rainforests in general) that you may not have heard before. 1. Around 80% of the food we eat originally came from rainforests. Some of the more popular examples include coffee, chocolate, rice, tomatoes, potatoes, bananas, black pepper, pineapples and corn. The Plants of the Rainforest A tropical greenhouse More than two thirds of the world's plant species are found in the tropical rainforests: plants that provide shelter and food for rainforest animals as well as taking part in the gas exchanges which provide much of the world's oxygen supply. Rainforest plants live in a warm humid environment that allows an enormous variation rare in more temperate climates: some like the orchids have beautiful flowers adapted to attract the profusion of forest insects. Competition at ground level for light and food has lead to evolution of plants which live on the branches of other plants, or even strangle large trees to fight for survival. The aerial plants often gather nourishment from the air itself using so-called 'air roots';. The humidity of the rainforest encourages such adaptations which would be impossible in most temperate forests with their much drier conditions.

Rainforest Biomes The tropical rain forest is a forest of tall trees in a region of year-round warmth. An average of 50 to 260 inches (125 to 660 cm.) of rain falls yearly. Rain forests belong to the tropical wet climate group. About the Rainforest - Information and Facts on Tropical Rainforests, Save the Rain Forest The role of the rainforest transcends scientific definitions. Even though only 7% of the world’s original rain forests remain, more than half of the planet’s species still live there. This wealth of life benefits us every day. Scientists are constantly discovering new uses for endemic plants, including many breakthrough drugs, while still less than one percent of the world’s rainforest have been explored for pharmaceutical properties.