What is a flood? 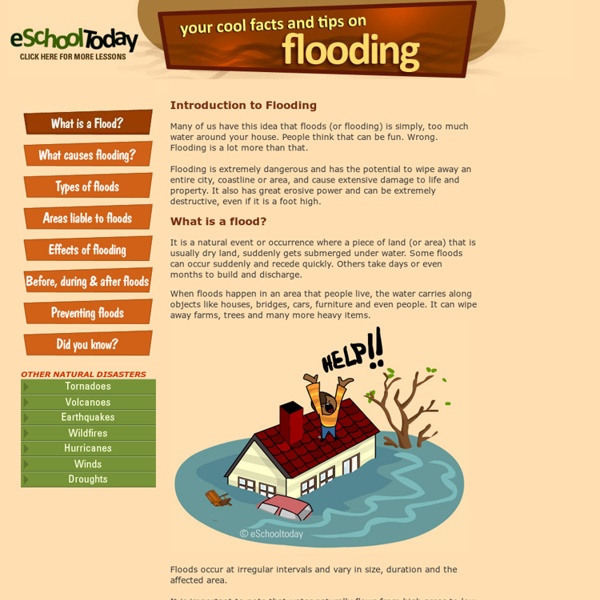 Introduction to Flooding Many of us have this idea that floods (or flooding) is simply, too much water around your house. People think that can be fun. Flooding is extremely dangerous and has the potential to wipe away an entire city, coastline or area, and cause extensive damage to life and property. What is a flood? It is a natural event or occurrence where a piece of land (or area) that is usually dry land, suddenly gets submerged under water. When floods happen in an area that people live, the water carries along objects like houses, bridges, cars, furniture and even people. Floods occur at irregular intervals and vary in size, duration and the affected area. It is important to note that water naturally flows from high areas to low lying areas. In this lesson, we shall see more about what causes flooding, the types of flooding, some effects of floods and what we can do before, during and after floods occur.

What is an Earthquake Introduction to Earthquakes & Tsunamis Turn on the TV or read the newspapers and almost always there is something devastating happening somewhere as a result of sheer nature's power. Examples of such natural occurrences are hurricanes, tornados, wildfires, volcanic eruptions, flooding, earthquakes and tsunamis. These are usually not caused directly by humans, but their effects live with us for a long time. In this lesson we shall look at one of such natural occurrences...earthquakes! What is an Earthquake? Simply, earthquakes are the rumblings, shaking or rolling of the earth's surface. Earthquakes come in many forms. Foreshocks, Mainshocks and Aftershocks: Sometimes, there are smaller shocks that occur before (foreshock) and after (aftershock) a main earthquake (mainshock). Earthquakes are also called temblors. It is important to understand the earth’s makeup to help understand earthquakes better. The Mantle is semi-molten rock, also called magma.

What Is a Tsunami? | Wonderopolis If you've ever taken a bath or swum in a lake or pool, you've probably enjoyed creating your own waves. Unlike solid objects, water is fluid and easy to move around. The harder you push with your hands, the bigger the waves will be. Now imagine what happens in the ocean when an earthquake occurs underground. If you've ever felt an earthquake or seen one on television, you know that they have the power to shake the ground and move large buildings. When an earthquake occurs under the ocean floor, the earthquake's massive energy is transferred to the water above it, creating a series of water waves called a tsunami. In addition to earthquakes, tsunamis can be caused by other events that generate enough energy to displace a large volume of water, such as volcanic eruptions, landslides, meteors, and even underwater tests of nuclear devices. Tragically, because of the huge amounts of water and energy involved, tsunamis can cause tremendous damage to coastal areas.

What is a volcano? Introduction to volcanoes The earth's mountains, plains, plateaus, soils, rocks, etc. as we see it today is believed to have gone through many phases, with about 80% of it being carved out by the action of volcanoes. A volcano is simply a rapture (opening or vent) on the earth's surface (crust) through which molten magma (extremely hot mixture of gases, lava, ash and other burning substances) escape on to the earth's surface. How do Volcanoes look like? In May 1980, the Mountain St. Volcanoes occur at weak zones or points in the earth’s crust (including constructive and destructive boundaries). For history lovers… In A.D. 79 (really long ago) two Roman cities, Pompeii and Herculaneum, were completely buried in ash and dust in a matter of hours after a volcanic eruption. The word, ‘volcano’ was made out of the name of a Roman god of a small island in the Mediterranean sea of Sicily called ‘Volcan’. Now we shall see in a bit more detail how volcanoes come about.

Natural Disasters 1. Most natural disasters are caused by weather. Weather disasters can be caused by hurricanes, tornadoes, floods, tsunamis, thunderstorms, wind storms, wildfires, avalanches, and blizzards. 2. 3. 4. 5. 6. 7. 8. 9. 10. Weather Wiz Thunderstorms What is a thunderstorm? A thunderstorm is a storm with lightning and thunder. Its produced by a cumulonimbus cloud, usually producing gusty winds, heavy rain and sometimes hail. What causes a thunderstorm?The basic ingredients used to make a thunderstorm are moisture, unstable air and lift. When are thunderstorms most likely to occur? How many thunderstorms are there every day? What is lightning? What causes lightning? Have you ever rubbed your feet across carpet and then touched a metal door handle? Click Here to see where lightning is currently striking across the U.S.What causes thunder? How far away can you see lightning and hear thunder? What is hail? What causes the wind to blow? What is a gust front? Know the Lingo SEVERE THUNDERSTORM WATCH - A severe thunderstorm (damaging winds of 58 miles per hour or more, or 1" hail in diameter or greater) is likely to develop in your area. Know the Facts The typical thunderstorm is 15 miles in diameter and lasts an average of 30 minutes.

Information on wildfires for young people Out of the many natural disasters we have, wild fires would be one that is very common, very difficult to fight, and maybe the most dangerous. What is a fire? Simple, it is the visible part of a combustion. This is simply a gas found in air. Fuel: Fuel is any kind of combustible material. Heat: Heat is thermal energy. Weather Wiz Kids weather information for kids