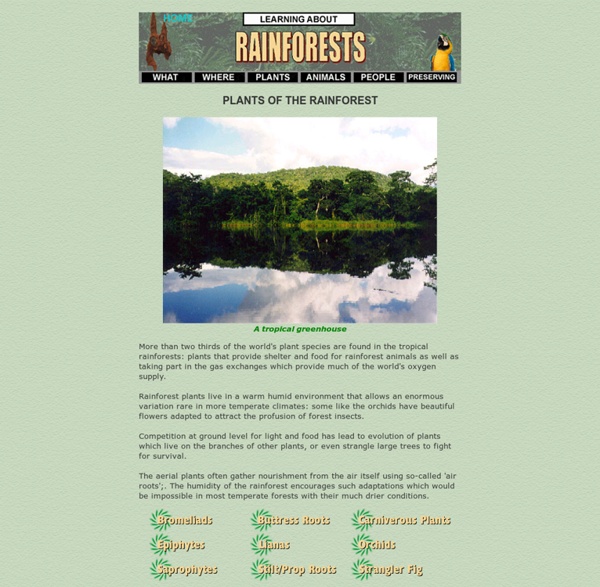 A tropical greenhouse More than two thirds of the world's plant species are found in the tropical rainforests: plants that provide shelter and food for rainforest animals as well as taking part in the gas exchanges which provide much of the world's oxygen supply. Rainforest plants live in a warm humid environment that allows an enormous variation rare in more temperate climates: some like the orchids have beautiful flowers adapted to attract the profusion of forest insects. Competition at ground level for light and food has lead to evolution of plants which live on the branches of other plants, or even strangle large trees to fight for survival. The aerial plants often gather nourishment from the air itself using so-called 'air roots';.

Helpful Plants Tropical Rainforest Resources Edible Rainforest Plants Allspice: (Pimenta dioica) Berries-- shaped like peppercorns-- of an evergreen tree which can grow up to 100' in height in height in the Latin American Rainforest. The small, aromatic fruits have a subtle flavor like a mixture of clove, cinnamon, and nutmeg, hence the name "allspice." Banana: (Musa paradisiaca) This is the most common Musa, but there are 21 species and subspecies which are edible. Black Pepper: (Piper nigrum) A vine native to the East Indies. Caspicum annum: Cayenne pepper, sweet pepper, paprika, and jalapenos are just four of the many cultivars of this plant. Cardamom: (Elleteria cardamom) Native to India, the third most expensive spice after saffron and vanilla. Cashews: (Anarcardium occidental) Originally from Tropical America, a valuable nut and vitamin rich fruit from the tree. Chocolate/Cocoa: (Theobroma cacao) Native to lowland tropical America, probably first domesticated in Mexico. Cinnamon: (Cinnamomum zeylanicum)

Rare Plant The rain forests of the world are estimated by scientists to contain 80% of the green flowering plants in existence and it is estimated that 2.5 acres of tropical rainforest may contain more than 750 types of trees and 1500 species of higher plants. With the loss of each acre of rainforest to farming, logging or other form s of development, hundreds of species disappear forever. Orchids: There are over 25,000 different types of orchids, and many are them are threatened, endangered or extinct. Orchids range in size from microscopic to several feet tall and the bloom can be larger than a human hand. A tragic phase in the history of orchids was during the 1800's, when many European aristocrats began collecting them. CITIES List of Endangered Orchids Orchid Photos Rafflesia Flower This incredible flower, found primarily in the shady lowland tropical forests of Indonesia, has by far the largest bloom of any flower and is one of the world's rarest and most endangered plants.

Medical Plants Rainforest Remedies Daniel Mowrey, Ph.D. Undiscovered Riches The number of potentially useful medicinal plants growing in the world's rainforests is estimated to be in the thousands. As much as we would like to see immediate results from rainforest exploration, the rule of thumb must be to go slowly. The only currently obvious trend in rainforest development is the phenomenon of drug companies rushing to South America and South Pacific Islands, usually under sponsorship of the National Cancer Institute, in search of novel compounds. Meanwhile, left to his own devices, the indigenous peoples of the rainforest and other 'uncivilized' places on the earth seem to do just fine utilizing methods passed down from generation to generation in accordance with a great variety of ingenious religious, social and medical customs. Some of the following herbs you may have heard of and others I am sure you have never heard of. Lapacho (Tabebuia avellandedae, and T. impetiginosa). Papaya (Carica papaya).