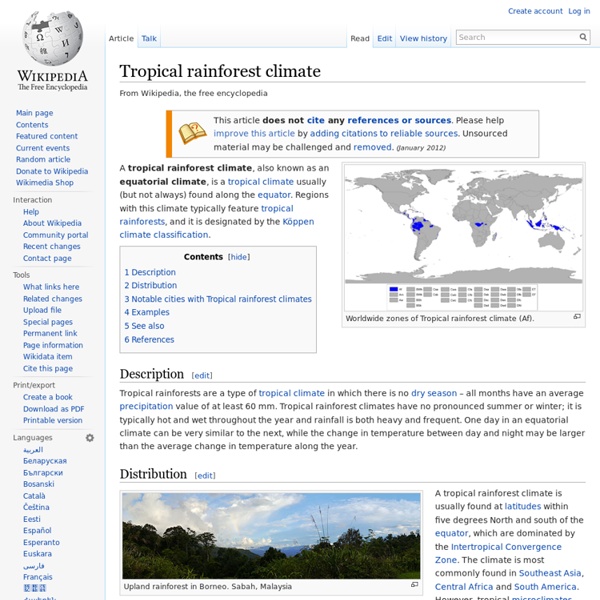 Worldwide zones of Tropical rainforest climate (Af). A tropical rainforest climate, also known as an equatorial climate, is a tropical climate usually (but not always) found along the equator. Regions with this climate typically feature tropical rainforests, and it is designated by the Köppen climate classification. Description[edit] Distribution[edit] Upland rainforest in Borneo. A tropical rainforest climate is usually found at latitudes within five degrees North and south of the equator, which are dominated by the Intertropical Convergence Zone. Some of the places that have this climate are indeed uniformly and monotonously wet throughout the year (e.g., the northwest Pacific coast of South and Central America, from Ecuador to Costa Rica, see for instance, Andagoya, Colombia), but in many cases the period of higher sun and longer days is distinctly driest (as at Palembang, Indonesia) or the time of lower sun and shorter days may have more rain (as at Sitiawan, Malaysia). Examples[edit]

Climate changes Do Trees Grow on Money? Rainforests are back on the global agenda in a big way. Governments now recognise the importance of protecting tropical forests in order to avoid dangerous climate change, and there is now much debate. As governments try to thrash out the details of a new international agreement, possibly to be signed at the end of 2010, they are discussing how best to include measures to save rainforests, and thereby address one of the major causes of climate change. Worldwide, forest destruction generates more greenhouse gas emissions each year than do all the trains, planes and cars on the planet. We need to protect the planet's remaining forests not only to stop climate change from getting worse, but to ensure that we can withstand the impacts of global warming. To date, most of the talk has focused on how to pay for reducing deforestation, rather than on how to actually go about doing it. Forest peoples must be at the centre of any solution to deforestation.

Cold Tempetures Updated January 11, 2009 A rainforest is a forest differentiated by high levels of precipitation - normally a minimum of at least 68-78 inches (172-198 cm) annually. Rainforests tend to have fairly mild and/or warm climates and feature the highest levels of biodiversity in the world. Additionally, tropical rainforests are considered the "lungs of the Earth" because of the high amount of photosynthesis occurring in them. Locations and Types of Rainforests Within the rainforest biome, there are two specific types of rainforest. Temperate rainforests have mild climates with cool, wet winters. The second and most widespread type of rainforest is a tropical rainforest. Tropical rainforests form in these locations because they are within the ITCZ, which provides the warm temperatures common in the forests. Rainforest Vegetation and Structure Within rainforests, there are four different layers with various plants that have adapted to life in that layer. The next layer is the understory.

Avarage Weather The tropical rain forest is a forest of tall trees in a region of year-round warmth. An average of 50 to 260 inches (125 to 660 cm.) of rain falls yearly. Rain forests belong to the tropical wet climate group. Rainforests now cover less than 6% of Earth's land surface. A tropical rain forest has more kinds of trees than any other area in the world. About 1/4 of all the medicines we use come from rainforest plants. All tropical rain forests resemble one another in some ways. Despite these differences, each of the three largest rainforests--the American, the African, and the Asian--has a different group of animal and plant species. Layers of the Rainforest There are four very distinct layers of trees in a tropical rain forest. Emergent trees are spaced wide apart, and are 100 to 240 feet tall with umbrella-shaped canopies that grow above the forest. Plant Life Besides these four layers, a shrub/sapling layer receives about 3 % of the light that filters in through the canopies. Animal Life

Cool Trees A giant in the rainforests, the kapok tree can reach up to 200 feet in height, sometimes growing as much as 13 feet per year. Due to its extreme height, the kapok, or ceiba tree, towers over the other rainforest vegetation. The trunk can expand to nine or 10 feet in diameter. In the nooks and grooves of this huge plant live a diverse number of species including frogs, birds and bromeliads. Medical Plants Rainforest Remedies Daniel Mowrey, Ph.D. Undiscovered Riches The number of potentially useful medicinal plants growing in the world's rainforests is estimated to be in the thousands. Certainly, mankind would benefit from the application of these plants. In future years, we might witness the discovery of cures for many serious diseases in rainforest plants. As much as we would like to see immediate results from rainforest exploration, the rule of thumb must be to go slowly. The only currently obvious trend in rainforest development is the phenomenon of drug companies rushing to South America and South Pacific Islands, usually under sponsorship of the National Cancer Institute, in search of novel compounds. Important Herbs From South American Rainforests The remainder of this article will discuss remedies from the rainforests of South America, since this is the area that is currently of most interest to North Americans. Lapacho (Tabebuia avellandedae, and T. impetiginosa). The Future.

Rainforest Animals Dangerous Animals The Amazon Rainforest is one of the world’s fascinating places. Its lush greenness is unlike anywhere else on Earth and for centuries, it has drawn travelers looking for adventure to it. Rainforests are associated with a feeling of calmness, and “Rainforest Sounds” CDs are bestsellers for anyone wanting relaxation music. You’d be forgiven for thinking it’s an oasis of tranquility and peacefulness. But it’s also one of the deadliest places on Earth. 10. Let’s start with one that’s not deadly to humans, though it would deliver a bit of a shock. Electric eels are rarely found in zoos and collections, because the built-in shock system makes it very difficult for them to be caught. The other interesting thing about electric eels is their unique breeding system – the males create a pool of saliva and the females lay their eggs in the “nest”. 9. This handsome fellow is one of the biggest freshwater fishes in the world, at over 100kg and 2m long. 8. 7. 6. The frogs are tiny but deadly.

Animals Often Seen Advertisement. EnchantedLearning.com is a user-supported site. As a bonus, site members have access to a banner-ad-free version of the site, with print-friendly pages.Click here to learn more. (Already a member? Click here.) Rainforests are tremendously rich in animal life. Different animals live in different strata of the rainforest. Many species of rainforest animals are endangered and many other have gone extinct as the number of acres of rainforests on Earth decreases. Protection from Predators Animals are always in danger of being eaten and have developed many methods of protecting themselves from hungry animals. Hiding: Some animals simply hide from predators, concealing themselves in burrows, under rocks or leaves, in tree hollows, or in other niches where they are hard to find. A Sampling of Rainforest Animals