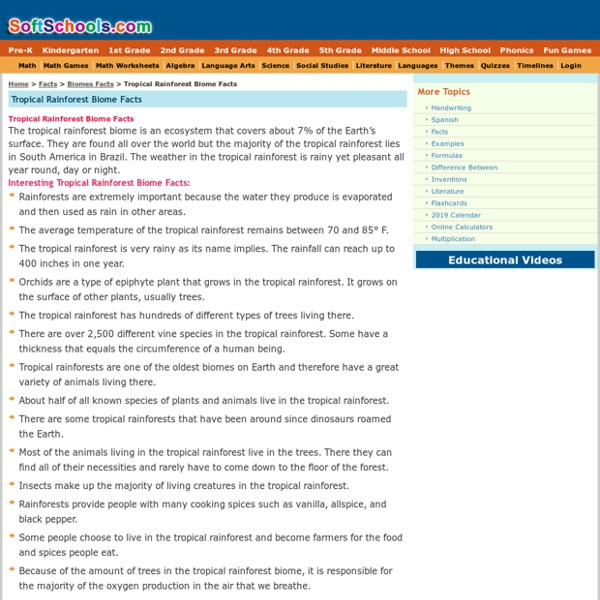 Rainforest Biomes The tropical rain forest is a forest of tall trees in a region of year-round warmth. An average of 50 to 260 inches (125 to 660 cm.) of rain falls yearly. Rain forests belong to the tropical wet climate group. The temperature in a rain forest rarely gets higher than 93 °F (34 °C) or drops below 68 °F (20 °C); average humidity is between 77 and 88%; rainfall is often more than 100 inches a year. There is usually a brief season of less rain. In monsoonal areas, there is a real dry season. Rainforests now cover less than 6% of Earth's land surface. A tropical rain forest has more kinds of trees than any other area in the world. About 1/4 of all the medicines we use come from rainforest plants. All tropical rain forests resemble one another in some ways. Despite these differences, each of the three largest rainforests--the American, the African, and the Asian--has a different group of animal and plant species. Layers of the Rainforest Plant Life Animal Life Where the Rainforests Are Found

About the Rainforest - Information and Facts on Tropical Rainforests, Save the Rain Forest | Rainforest Adventures The role of the rainforest transcends scientific definitions. Even though only 7% of the world’s original rain forests remain, more than half of the planet’s species still live there. This wealth of life benefits us every day. Simply put, rainforests are the Earth’s lungs. Additionally many food items you enjoy every day originally came from rainforest across the globe. Due to deforestation, some 100 species will become extinct every day – many of them are still undiscovered and their qualities will be lost forever. Rainforests Facts Facts about Rainforests Do you know how many tropical rainforest plants have been identified as having anti-cancer properties? Or how many continents around the world contain rainforests? And just how quickly are the world's rainforests disappearing? Find out the answers to these questions and more as you check out these interesting rainforest facts! Facts about the Global Coverage of Rainforests Covering less than 2 percent of the Earth's total surface area, the world's rainforests are home to 50 percent of the Earth's plants and animals. Facts about the Rainforest as Part of our Global Environment and Well-being Rainforests act as the world's thermostat by regulating temperatures and weather patterns. Facts about the Abundant Life and Important Resources that Rainforests Share with Us A typical four-square-mile patch of rainforest contains as many as 1,500 flowering plants, 750 species of trees, 400 species of birds and 150 species of butterflies. Want to Test Your Rainforest Knowledge?

Top 10 facts about the Amazon Rainforest | The Inside Track | Travel Blog from On The Go Tours The Amazon is synonymous with Central and South America – it’s the largest of the rainforests, supporting a huge number of plants and animals and hugely important to our own survival. Taking up most of the Amazon Basin, the Amazon rainforest is mostly contained within Brazil, and stretches into Peru, Ecuador, Bolivia, and smaller parts in some other South American countries. Here are ten interesting facts about the Amazon (and rainforests in general) that you may not have heard before. 1. Around 80% of the food we eat originally came from rainforests. 2. 3. 4. 5. 6. Over half the world’s plants and animals can be found in the rainforests. 7. 8. 9. 10. Sunset on the Amazon River Clearly now is the time to visit this amazing region learn more about this natural marvel and to help gain and spread awareness about how urgent the need to save the rainforest is. Source: How Rainforests Work

The Plants of the Rainforest A tropical greenhouse More than two thirds of the world's plant species are found in the tropical rainforests: plants that provide shelter and food for rainforest animals as well as taking part in the gas exchanges which provide much of the world's oxygen supply. Rainforest plants live in a warm humid environment that allows an enormous variation rare in more temperate climates: some like the orchids have beautiful flowers adapted to attract the profusion of forest insects. Competition at ground level for light and food has lead to evolution of plants which live on the branches of other plants, or even strangle large trees to fight for survival. The aerial plants often gather nourishment from the air itself using so-called 'air roots';.

Earth Floor: Biomes Tropical Rainforest: Plants Although tropical rainforests receive 12 hours of sunlight daily, less than 2% of that sunlight ever reaches the ground. The tropical rainforest has dense vegetation, often forming three different layers--the canopy, the understory, and the ground layer. Frequently, people think of the tropical rainforest as a "jungle" where plant growth is dense even at ground level. However, the canopy created by the tall trees (100-120 feet) and the understory, prevents sunlight from reaching the ground. The soil is, therefore, always shaded, and very little vegetation is able to survive at ground level. Vegetation can become dense at ground level near riverbanks and on hillsides. Plant adaptation Plant survival in a tropical rainforest depends on the plant's ability to tolerate constant shade or to adapt strategies to reach sunlight. Competition for sunlight by plants is sometimes deadly. Back | Next

The average temperature in the rainforest is about 30C, 80F it changer very l... Tropical Rainforest The rainforest that we have chosen to do our project on is in and is called the Amazon Rainforest. You can see on the picture in the upper left corner that the Amazon is the dark green area on the map. In an average year in a tropical rainforest, the climate is very humid do to all of the rain which amounts to about 250cm per year. The climate is found near the equator. 40o F. This is red fungus (Pycnoporus sanguineus) these would be classified in the Fungi kingdom. This is white fungus (Lentinus) and it would be classified in the Fungi kingdom. This is the fern leaf. This is the Cattleya Plant. This is the Toco Toucan. This is the vampire bat. This is Euglena. This is an Actinopod. Howler Monkey The howler monkey is the loudest monkey in the rainforest. The howler monkey can get up to 2ft and there tail 30”. The Baboon can live up to 20years.Howler monkeys are vegetarians they eat flowers, fruits, and leaves. 1. 2. 3. 4. 5. 1. www.earthobservatory

Fact sheet: Tropical Rainforest Animals Where can you find an antelope the size of a rabbit, a snake that can fly, or a spider that eats birds? All in tropical rainforests, of course! Tropical rainforests are home to the largest and the smallest, the loudest and the quietest of all land animals, as well as some of the most dangerous, most beautiful, most endearing and strangest looking animals on earth. You've probably heard of some of them: jaguars, toucans, parrots, gorillas, and tarantulas all make their home in tropical rainforests. Q: Why do more animal species live in the rainforest than other parts of the world? A: Scientists believe that there is a great diversity of animals because rainforests are the oldest ecosystems on earth. The nearly perfect conditions for life also helped contribute to the great number of species. Some rainforest species have populations that number in the millions. Q: Which type of rainforest species is most numerous? Insects are often beautiful and always fascinating. Glossary

Tropical Rain Forest As you can see from the map to the right, the tropical rainforests are, indeed, located in the tropics, a band around the equator from 23.5 N (the Tropic of Cancer) to 23.5 S (the Tropic of Capricorn) (red lines on map, right). Because the Earth tilts 23.5 degrees on its axis as it travels around the sun, at some point in the year (the solstices, June 22nd in the north, December 22nd in the south) the sun will be directly overhead on one of these lines. At the equinoxes the sun is directly over the equator. Within this band, solar radiation is most intense, and thus the surface of the planet warms the most. The warmth leads to a lot of evaporation, and as warm, moist air rises, it cools, the water condenses, and the water falls back to the earth as rain. Not all of the land in the tropics is tropical rainforest. {*style:<a href=''>*}{*style:</a>*}Another biome similar to the tropical rain forest is the{*style:<b>*} cloud forest.