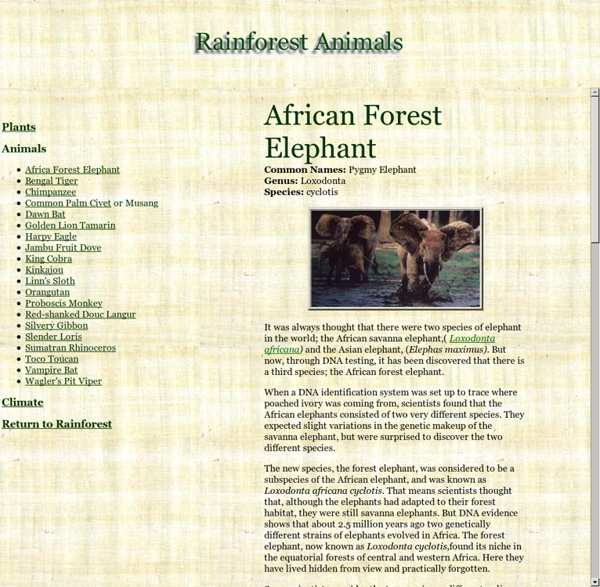 Endangered Rainforest Animals Animals are categorized under endangered species if they are at risk of becoming extinct either because of their few numbers or due to the change in the environmental condition. As per the International Union for Conservation of Nature and Natural Resources (IUCN) data, about 40 percent of the total organisms are on the verge of extinction in the near future. In 1963, the IUCN created the Red Data List of more than 15,500 species, after evaluating the extinction risk of various species and subspecies worldwide. This list is also known as IUCN Red List of Threatened Species or IUCN Red List. Among the many ecosystems, rainforests are those forest areas that are characterized by heavy rainfall (1750 - 2000 mm). They represent one of the richest ecosystems on Earth and are referred to as the 'Jewels of the Earth'.

climate. A tropical rainforest is an ecosystem type that occurs roughly within the latitudes 28 degrees north or south of the equator (in the equatorial zone between the Tropic of Cancer and Tropic of Capricorn). This ecosystem experiences high average temperatures and a significant amount of rainfall. Rainforests can be found in Asia, Australia, Africa, South America, Central America, Mexico and on many of the Pacific, Caribbean, and Indian Ocean islands. Within the World Wildlife Fund's biome classification, tropical rainforests are thought to be a type of tropical wet forest (or tropical moist broadleaf forest) and may also be referred to as lowland equatorial evergreen rainforest.[3] Rainforest Biomes The tropical rain forest is a forest of tall trees in a region of year-round warmth. An average of 50 to 260 inches (125 to 660 cm.) of rain falls yearly. Rain forests belong to the tropical wet climate group. The temperature in a rain forest rarely gets higher than 93 °F (34 °C) or drops below 68 °F (20 °C); average humidity is between 77 and 88%; rainfall is often more than 100 inches a year. There is usually a brief season of less rain. In monsoonal areas, there is a real dry season.

The average temperature in the rainforest is about 30C, 80F it changer very l... Tropical Rainforest The rainforest that we have chosen to do our project on is in and is called the Amazon Rainforest. You can see on the picture in the upper left corner that the Amazon is the dark green area on the map.

Saving Forests Page Content These nature-based initiatives aid in global mitigation efforts by preserving or restoring standing forests, which absorb massive amounts of carbon from the atmosphere.[Click to enlarge & view our slideshow] Protecting forests has always been central to CI's mission. Tropical Rain Forest As you can see from the map to the right, the tropical rainforests are, indeed, located in the tropics, a band around the equator from 23.5 N (the Tropic of Cancer) to 23.5 S (the Tropic of Capricorn) (red lines on map, right). Because the Earth tilts 23.5 degrees on its axis as it travels around the sun, at some point in the year (the solstices, June 22nd in the north, December 22nd in the south) the sun will be directly overhead on one of these lines. At the equinoxes the sun is directly over the equator. Within this band, solar radiation is most intense, and thus the surface of the planet warms the most. The warmth leads to a lot of evaporation, and as warm, moist air rises, it cools, the water condenses, and the water falls back to the earth as rain.

Rainforests Facts Facts about Rainforests Do you know how many tropical rainforest plants have been identified as having anti-cancer properties? Or how many continents around the world contain rainforests? And just how quickly are the world's rainforests disappearing? Find out the answers to these questions and more as you check out these interesting rainforest facts!