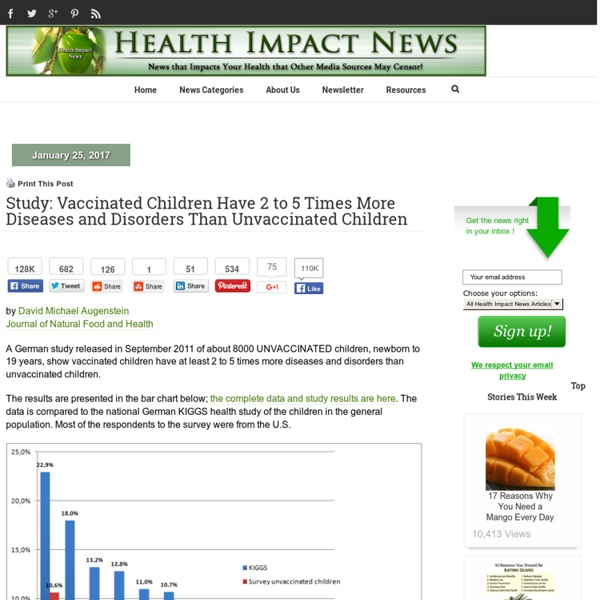 by David Michael Augenstein Journal of Natural Food and Health A German study released in September 2011 of about 8000 UNVACCINATED children, newborn to 19 years, show vaccinated children have at least 2 to 5 times more diseases and disorders than unvaccinated children. The results are presented in the bar chart below; the complete data and study results are here. The data is compared to the national German KIGGS health study of the children in the general population. Most of the respondents to the survey were from the U.S. The data was collected from parents with vaccine-free children via an internet questionnaire by vaccineinjury.info and Andreas Bachmair, a German classical homeopathic practitioner. No study of health outcomes of vaccinated people versus unvaccinated has ever been conducted in the U.S. by CDC or any other agency in the 50 years or more of an accelerating schedule of vaccinations (now over 50 doses of 14 vaccines given before kindergarten, 26 doses in the first year).

Exposed: CDC deliberately manipulated, covered up scientific data showing link between vaccines containing mercury and autism (NaturalNews) Deniers of the link between mercury-laden vaccines and autism are going to have a hard time denying the latest findings by the Coalition for Mercury-Free Drugs (CoMeD). The nonprofit group has obtained critical documents via a Freedom of Information Act (FOIA) request that exposes the US Center for Disease Control and Prevention's (CDC) role in deliberately lying about and manipulating a key Danish study that showed a clear link between vaccines containing mercury and autism. In 2003, the journal Pediatrics published a study conducted in Denmark that observed a significant decline in autism rates following the country's elimination of Thimerosal, a mercury-based component, from vaccines.

Some Facts About Polio That The CDC Wishes You Didn’t Know Many people I talk to agree that the current CDC vaccination schedule is appalling. These same people commonly acknowledge that vaccines for HPV or the flu are ineffective and cause much more harm than good. However, many of these seemingly intelligent people fall into the “But, Polio” crowd. False Accusations of Child Abuse After Vaccine Induced Injuries Destroys Families Vaccine injuries destroy families. As I have explained on previous occasions there are a growing number of parents who have been falsely accused of child abuse. Many of these cases only occur after parents mention that their child first became ill after they received a routine vaccination. Over the years as a journalist exposing these issues, I have been asked to help dozens of families worldwide who have lost their children or are losing their children as a result of false accusations. I spend many hours sifting through paperwork and engaging with a small number of brave professionals who are willing to give up their time and experience to help in these difficult and complex cases. At various conferences throughout the year as part of my presentation I show a film describing an assortment of cases that I have been involved in or am currently involved in.

Measles and measles vaccines: fourteen things to consider. ~by Roman Bystrianyk (co-author Dissolving Illusions: Disease, Vaccines, and the Forgotten History) “For over 100 years, there has been a strong association with vitamin A deficiency and adverse measles outcomes, especially in young children. Has the time come for the medical community to recognize that any child presenting with measles complications should be given vitamin A and evaluated for overall nutritional status? If not, what has history taught us?” – Adrianne Bendich, 1992

Neurological disorder MMF found to be caused by vaccines: scientific proof (NaturalNews) It is a little-known condition that can trigger persistent and debilitating symptoms similar to those associated with multiple sclerosis (MS) and fibromyalgia, but is also one that the medical profession at large is still unwilling to acknowledge. And yet emerging research continues to show that macrophagic myofasciitis, or MMF, is a very real condition brought about as a direct result of vaccines that contain aluminum adjuvants, which become lodged in muscle tissue and lead to severe neurological damage and other problems. First identified in 1998, MMF is characterized by debilitating muscle and joint pain, chronic inflammation, and incapacitating fatigue.

8 Questions toHandle A Pro Vax Assault It might be a neighbor, a relative, or a casual acquaintance. It might even be your pediatrician or other health care provider. They make some outrageous or attacking comment about how the non-vaccinated (they usually say Unvaccinated, but it’s not possible to “un” vaccinate a person, so I prefer the term “non” vaccinated) are putting everyone at risk, are harming their own kids and others, etc. The interesting thing is most of these people have no idea about the science behind the vaccination debate nor the forces promoting the oft repeated mantras “vaccines are safe and effective; they’ve saved the world; you’re stupid if you don’t get one; if there are risks they are very very rare.”

January, 2012: Seizures and 5-in-1 Vaccines « The MedAlerts Blog It was reported in the Journal of the American Medical Association (JAMA) that the 5-vaccine combination shot DTP-Polio-Hib (known as Pentacel) is associated with seizures in children. This innoculation against DTP (Diphtheria, Tetanus, Pertussis), Polio, and Hib (Haemophilus Influenzae B) is given to children at age 3, 5, and 12 months. Let’s search the VAERS database to see if the data agrees with this report. Rather than asking for the results of any particular vaccine, let’s look at those VAERS events that list seizures as a symptom, and then examine the age groups and vaccines that were given.

The Pertussis Vaccine Lists Autism and Sudden Infant Death Syndrome as Serious Adverse Events on the Package Insert MB Comment: There is a constant media barrage of stories urging everyone to get vaccinated against pertussis (whooping cough). Every such story castigates those who refuse the vaccine as endangering themselves and society by not vaccinating. I previously ran an article discrediting that argument. The pertussis vaccine by definition is not bactericidal — it does not kill bacteria. Therefore, vaccinated individuals can carry and transmit pertussis bacteria just the same as the unvaccinated.

Pfizer profit tops estimates on pain drug, vaccine sales Pfizer Inc., the world's largest drugmaker, reported third-quarter profit that topped analyst estimates on increased sales of its pain drug and vaccine for pneumonia. The company raised its annual forecast.Profit excluding certain items was 62 cents a share, beating by 6 cents the average estimate of 18 analysts surveyed by Bloomberg. Net income rose to $3.74 billion, or 48 cents a share, from $866 million, or 11 cents a share, a year earlier, New York-based company said in a statement.Pfizer is considering a sale or spinoff of its nutrition and animal health units to focus on bringing new drugs to market and prepare for generic competition to Lipitor, the world's best-selling drug with $10.7 billion in annual sales. Lipitor loses patent protection this month.

Why is autism increasing? I dunno says culpable CDC, anything but vaccine adverse reactions Dr. Yeargin-Allsopp Chief of the Developmental Disabilities Branch at the CDC MB Comment: The pseudo-scientists at the CDC are incapable of admitting that they have caused an epidemic of neurological damage from vaccine adverse reactions, despite overwhelming evidence from the FDA Vaccine Adverse Event Reporting System and the Vaccine Injury Compensation Program.

GlaxoSmithKline Q4 profits up 66% from H1N1 vaccines The world’s second largest drug maker by revenue, GlaxoSmithKline, profits are up 66 percent, according to International Business Times. In the last three months of 2009, the drug company netted $2.6 billion in profit, compared to more than $1 billion the year prior. The strong finish, according to ABC News, pushed full-year profits up 20 percent, or approximately $7 billion. “I believe that GSK is now moving to a position where we can deliver our goal of long-term sustainable financial performance. 2009 saw GSK return to sales growth and I am confident of our prospects in 2010,” said Chief Executive Andrew Witty.

How vaccines damage your brain: Vaccines, Depression and Neurodegeneration After Age 50 Although he graduated from medical school believing in the vital importance of vaccinations, after 20 years in practice — and encountering hundreds of vaccine casualties — Dr Joseph Mercola was forced to review the evidence. It led him to a completely different view on the subject. One of the tragedies that he found was that those who were at the greatest risk of injury from vaccines — children and the elderly — are the ones who receive the most vaccines, often being given multiple shots at one time. It is also important to understand that autism was virtually unheard of before vaccinations; its emergence precisely parallels mass vaccination programs. ADD and learning disorders in children are also now being traced to childhood vaccinations. Brain damage, at any age, is by far the most common adverse reaction associated with vaccinations, although their actual numbers are not often reported accurately.