Oneirology. Chinese symbol for Oneiromancy Oneirology (/ɒnɨˈrɒlədʒi/; from Greek ὄνειρος, oneiros, "dream"; and -λογία, -logia, "the study of") is the scientific study of dreams. 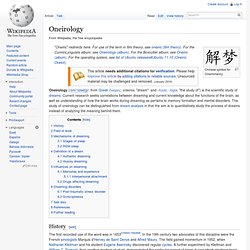 Current research seeks correlations between dreaming and current knowledge about the functions of the brain, as well as understanding of how the brain works during dreaming as pertains to memory formation and mental disorders. The study of oneirology can be distinguished from dream analysis in that the aim is to quantitatively study the process of dreams instead of analyzing the meaning behind them. History[edit] The first recorded use of the word was in 1653[citation needed]. The independent and almost simultaneous confirmation of lucid dreaming by Stephen LaBerge of Stanford University and Keith Hearne encouraged further experiments and developments. Brodmann area. Brodmann areas 3D A Brodmann area is a region of the human cerebral cortex defined based on its cytoarchitectonics, or structure and organization of cells. 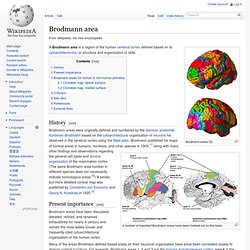 History[edit] A number of important Brodmann areas have been marked out on this brain. Brodmann areas were originally defined and numbered by the German anatomist Korbinian Brodmann based on the cytoarchitectural organization of neurons he observed in the cerebral cortex using the Nissl stain. Brodmann published his maps of cortical areas in humans, monkeys, and other species in 1909,[1] along with many other findings and observations regarding the general cell types and laminar organization of the mammalian cortex.

Present importance[edit] Brodmann areas have been discussed, debated, refined, and renamed exhaustively for nearly a century and remain the most widely known and frequently cited cytoarchitectural organization of the human cortex. Brodmann areas for human & non-human primates[edit] (*) Area only found in non-human primates. Monothematic delusion. A monothematic delusion is a delusional state that concerns only one particular topic. 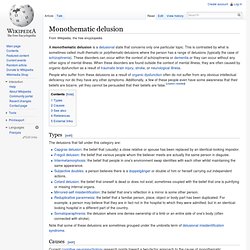 This is contrasted by what is sometimes called multi-thematic or polythematic delusions where the person has a range of delusions (typically the case of schizophrenia). These disorders can occur within the context of schizophrenia or dementia or they can occur without any other signs of mental illness. When these disorders are found outside the context of mental illness, they are often caused by organic dysfunction as a result of traumatic brain injury, stroke, or neurological illness. People who suffer from these delusions as a result of organic dysfunction often do not suffer from any obvious intellectual deficiency nor do they have any other symptoms. Additionally, a few of these people even have some awareness that their beliefs are bizarre, yet they cannot be persuaded that their beliefs are false. Fregoli delusion. The Fregoli delusion, or the delusion of doubles, is a rare disorder in which a person holds a delusional belief that different people are in fact a single person who changes appearance or is in disguise. 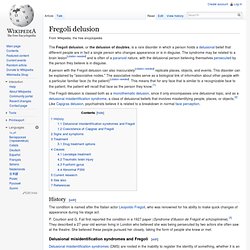 The syndrome may be related to a brain lesion[citation needed] and is often of a paranoid nature, with the delusional person believing themselves persecuted by the person they believe is in disguise. A person with the Fregoli delusion can also inaccurately[citation needed] replicate places, objects, and events. This disorder can be explained by "associative nodes. " The associative nodes serve as a biological link of information about other people with a particular familiar face (to the patient)[citation needed]. Delusional misidentification syndrome. Delusional misidentification syndrome is an umbrella term, introduced by Christodoulou (in his book The Delusional Misidentification Syndromes, Karger, Basel, 1986) for a group of delusional disorders that occur in the context of mental or neurological illness. 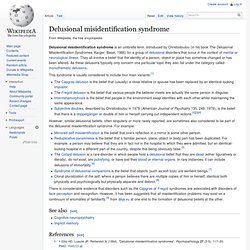 They all involve a belief that the identity of a person, object or place has somehow changed or has been altered. As these delusions typically only concern one particular topic they also fall under the category called monothematic delusions. This syndrome is usually considered to include four main variants:[1] However, similar delusional beliefs, often singularly or more rarely reported, are sometimes also considered to be part of the delusional misidentification syndrome. 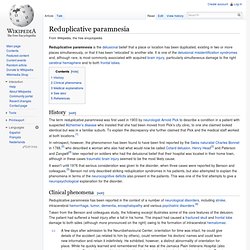 It is one of the delusional misidentification syndromes and, although rare, is most commonly associated with acquired brain injury, particularly simultaneous damage to the right cerebral hemisphere and to both frontal lobes. History[edit] The term reduplicative paramnesia was first used in 1903 by neurologist Arnold Pick to describe a condition in a patient with suspected Alzheimer's disease who insisted that she had been moved from Pick's city clinic, to one she claimed looked identical but was in a familiar suburb. To explain the discrepancy she further claimed that Pick and the medical staff worked at both locations.[1] Misophonia. Misophonia, literally "hatred of sound", is a neurological disorder in which negative experiences (anger, flight, hatred, disgust) are triggered by specific sounds.[1] The sounds can be loud or soft.[2] The term was coined by American neuroscientists Pawel Jastreboff and Margaret Jastreboff[3] and is often used interchangeably with the term selective sound sensitivity.[4] Misophonia has not been classified as a discrete disorder in DSM-5 or ICD-10, but in 2013 three psychiatrists at the Academic Medical Center in Amsterdam formulated diagnostic criteria for it based on the largest cohort of misophonia patients so far, and suggested that it be classified as a separate psychiatric disorder.[5] The disorder comprises a unique set of symptoms, most likely attributable to neurological causes unrelated to hearing-system dysfunction. 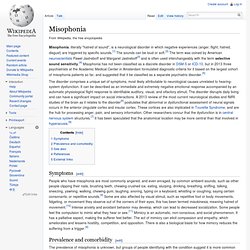 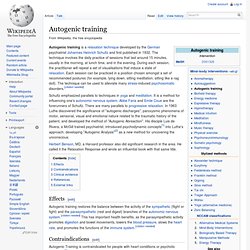 It is a method for influencing one's autonomic nervous system. Abbe Faria and Emile Coue are the forerunners of Schultz. There are many parallels to progressive relaxation. In 1963 Luthe discovered the significance of "autogenic discharges", paroxysmic phenomena of motor, sensorial, visual and emotional nature related to the traumatic history of the patient, and developed the method of "Autogenic Abreaction". His disciple Luis de Rivera, a McGill trained psychiatrist, introduced psychodynamic concepts[1] into Luthe's approach, developing "Autogenic Analysis"[2] as a new method for uncovering the unconscious. Herbert Benson, MD, a Harvard professor also did significant research in the area. Lucid Dream.

A lucid dream is any dream in which one is aware that one is dreaming. 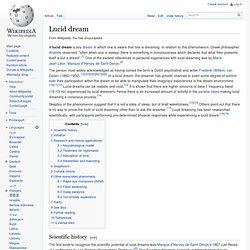 In relation to this phenomenon, Greek philosopher Aristotle observed: "often when one is asleep, there is something in consciousness which declares that what then presents itself is but a dream".[1] One of the earliest references to personal experiences with lucid dreaming was by Marie-Jean-Léon, Marquis d'Hervey de Saint Denys.[2] Skeptics of the phenomenon suggest that it is not a state of sleep, but of brief wakefulness.[15][16] Others point out that there is no way to prove the truth of lucid dreaming other than to ask the dreamer.[17] Lucid dreaming has been researched scientifically, with participants performing pre-determined physical responses while experiencing a lucid dream.[18][19] Scientific history[edit] Philosopher Norman Malcolm's 1959 text Dreaming[22] had argued against the possibility of checking the accuracy of dream reports.

Hearne's results were not widely distributed. Initiation[edit] REM sleep. Serotonin Syndrome. Serotonin syndrome is a potentially life-threatening drug reaction that may occur following therapeutic drug use, inadvertent interactions between drugs, overdose of particular drugs, or the recreational use of certain drugs. 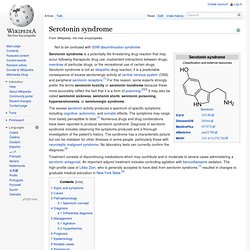 Serotonin syndrome is not an idiopathic drug reaction; it is a predictable consequence of excess serotonergic activity at central nervous system (CNS) and peripheral serotonin receptors.[1] For this reason, some experts strongly prefer the terms serotonin toxicity or serotonin toxidrome because these more accurately reflect the fact that it is a form of poisoning.[2][3] It may also be called serotonin sickness, serotonin storm, serotonin poisoning, hyperserotonemia, or serotonergic syndrome. The excess serotonin activity produces a spectrum of specific symptoms including cognitive, autonomic, and somatic effects. The symptoms may range from barely perceptible to fatal.[1] Numerous drugs and drug combinations have been reported to produce serotonin syndrome. Cryptomnesia. Cryptomnesia occurs when a forgotten memory returns without it being recognized as such by the subject, who believes it is something new and original.

It is a memory bias whereby a person may falsely recall generating a thought, an idea, a song, or a joke,[1] not deliberately engaging in plagiarism but rather experiencing a memory as if it were a new inspiration. Early use[edit] The word was first used by the psychiatrist Théodore Flournoy,[2] in reference to the case of medium Hélène Smith (Catherine-Élise Müller) to suggest the high incidence in psychism of "latent memories on the part of the medium that come out, sometimes greatly disfigured by a subliminal work of imagination or reasoning, as so often happens in our ordinary dreams.

" Carl Gustav Jung treated the subject in his thesis On the Psychology and Pathology of So-Called Occult Phenomena (1902)[3] and in an article, Cryptomnesia (1905),[4] suggested the phenomenon in Nietzsche's Also Sprach Zarathustra.