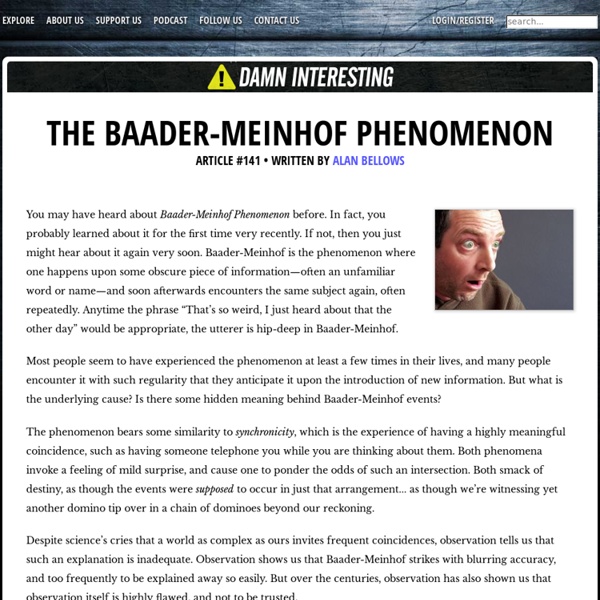 You may have heard about Baader-Meinhof Phenomenon before. In fact, you probably learned about it for the first time very recently. If not, then you just might hear about it again very soon. Baader-Meinhof is the phenomenon where one happens upon some obscure piece of information—often an unfamiliar word or name—and soon afterwards encounters the same subject again, often repeatedly. Anytime the phrase “That’s so weird, I just heard about that the other day” would be appropriate, the utterer is hip-deep in Baader-Meinhof. Most people seem to have experienced the phenomenon at least a few times in their lives, and many people encounter it with such regularity that they anticipate it upon the introduction of new information. The phenomenon bears some similarity to synchronicity, which is the experience of having a highly meaningful coincidence, such as having someone telephone you while you are thinking about them. The reason for this is our brains’ prejudice towards patterns.

Teleologic Evolution, Intelligent Self-Design, Anticipatory Computing, Local-Global Feedback Concurrent ontology and the extensional conception of attribute "By analogy with the extension of a type as the set of individuals of that type, we define the extension of an attribute as the set of states of an idealized observer of that attribute, observing concurrently with observers of other attributes. The attribute theoretic counterpart of an operation mapping individuals of one type to individuals of another is a dependency mapping states of one attribute to states of another. We integrate attributes with types via a symmetric but not self-dual framework of dipolar algebras or disheaves amounting to a type-theoretic notion of Chu space over a family of sets of qualia doubly indexed by type and attribute, for example the set of possible colors of a ball or heights of buildings. We extend the sheaf-theoretic basis for type theory to a notion of disheaf on a profunctor. Keywords: Attribute, Chu space, ontology, presheaf, type."

Seekers Of The Lost Pieces – The Lacanian Review When I first saw the Kennedy assassination filmed by Zapruder, I thought that Jacqueline was trying to jump out of the limousine after the fatal shot. An understandable reaction of panic in someone who sees bullets impact on the one next to them. Later, White’s interview made me see better what the images showed. She did not jump out of the vehicle, but instead tried to retrieve a piece of her husband’s brain mass. Vain effort from the medical point of view, but not from the perspective of desire. Is slavery wrong? - Atheist Alliance International Recently a Muslim asked me, “Why is it bad to own slaves?” It’s a good question and it needs an answer. What religions tell us Both Christians and Muslims can answer this question from their holy scriptures, and both would find similar answers. The Bible, in the Old and New Testaments, permits slavery.

1. What is Multimodal Literacy? – Multimodal Literacy Multimodal literacy, first proposed by Professor Gunter Kress and Professor Carey Jewitt, Institute of Education, University of London[1], is about understanding the different ways of knowledge representations and meaning-making. Multimodal literacy focuses on the design of discourse by investigating the contributions of specific semiotic resources, (e.g. language, gesture, images) co-deployed across various modalities (e.g. visual, aural, somatic), as well as their interaction and integration in constructing a coherent multimodal text (such as advertisements, posters, news report, websites, films). The pedagogical approaches in developing multimodal literacy is informed by the seminal work by Emeritus Professor Michael Halliday’s in Systemic Functional Theory[2] as well as other international scholars and researchers in the field of multimodality.

The Effects Of Emotional Abuse & How To Heal Them - mindbodygreen Insomnia, appetite changes, constant fear, a sense of doom, and hopelessness: self-destruct mode. This is your body saying "no more." Your patchwork — the above four solutions — aren't working anymore, and your body is going to torture your mind until you surrender to the only permanent solution: love. You should seek professional therapy for anxiety and depression, but I would highly recommend that all emotional abuse survivors approach therapy from the perspective of love rather than constant analysis of your undesirable behaviors. Instead of searching your memories, try feeling your feelings.

Rudy's Blog Today I’m posting the text of my story, “Laser Shades” for your holiday reading pleasure. The story was commissioned for The Superlative Light, a photo book by Robert Shults, but it has not been otherwise published as yet. Two news items before my story. The writer and columnist Damien Walter posted “Let the Strangeness In,” a good interview/discussion about transrealism between me and Monica Byrne, author of the excellent novel The Girl In The Road. And, on the same day, synchronistically enough, my film-maker friend Edgar Pêra posted Trans-Realist Maniphesto a video from Lisbon, 1994, with me and good old Terence McKenna. And now…on with the show..

Character Strengths and Virtues: A Classification Character Strengths and Virtues is a groundbreaking handbook that was created built on reports from a prestigious group of researchers who have attempted to create a systematic classification and measurements of widely valued positive traits. The aim was to present a measure of humanist ideals of virtue in an empirical and scientific way. This handbook intends to provide a theoretical framework that will help assist positive psychology practitioners in developing practical applications for the field. There are six classes of virtues that are made up of 24 character strengths: Wisdom and KnowledgeCourageHumanityJusticeTemperanceTranscendence Researchers approached the measurement of “good character” based on different kinds of strengths: authenticity, persistence, kindness, gratitude, hope, humor, and so on.

8 Things About Concentrating “Music helps me concentrate,” Mike said to me glancing briefly over his shoulder. Mike was in his room writing a paper for his U.S. History class.