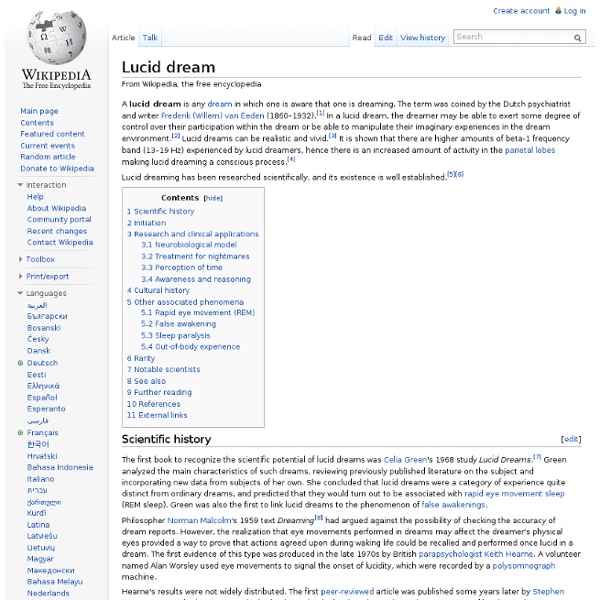 A lucid dream is any dream in which one is aware that one is dreaming. In relation to this phenomenon, Greek philosopher Aristotle observed: "often when one is asleep, there is something in consciousness which declares that what then presents itself is but a dream".[1] One of the earliest references to personal experiences with lucid dreaming was by Marie-Jean-Léon, Marquis d'Hervey de Saint Denys.[2] Skeptics of the phenomenon suggest that it is not a state of sleep, but of brief wakefulness.[15][16] Others point out that there is no way to prove the truth of lucid dreaming other than to ask the dreamer.[17] Lucid dreaming has been researched scientifically, with participants performing pre-determined physical responses while experiencing a lucid dream.[18][19] Scientific history[edit] Philosopher Norman Malcolm's 1959 text Dreaming[22] had argued against the possibility of checking the accuracy of dream reports. Hearne's results were not widely distributed. Initiation[edit] REM sleep.

Psychophysiology of Lucid Dreaming by Stephen LaBerge, Ph.D. Lucid Dreaming Physiologically Verified Although we are not usually explicitly aware of the fact that we are dreaming while we are dreaming, at times a remarkable exception occurs, and we become conscious enough to realize that we are dreaming. "Lucid" dreamers (the term derives from van Eeden, 1913) report being able to freely remember the circumstances of waking life, to think clearly, and to act deliberately upon reflection, all while experiencing a dream world that seems vividly real (Green, 1968; LaBerge, 1985; Gackenbach & LaBerge, 1988). This is all in contrast to the usual past characterization of dreams as typically lacking any reflective awareness or true volition (Rechtschaffen, 1978). Lucid dreaming is normally a rare experience.

Lucid Dreaming/Induction Techniques This page describes a number of lucid dream induction techniques. It is recommended that you be able to recall at least one dream per night in order to maximize the effectiveness of these methods. Preliminary Knowledge[edit] Certain elements are common to many of the lucidity-inducing techniques discussed later in this chapter. To better understand these techniques, these common components will be discussed first.

Stoicism School of Hellenistic Greek philosophy Stoicism is a school of Hellenistic philosophy which was founded by Zeno of Citium, in Athens, in the early 3rd century BC. Stoicism is a philosophy of personal ethics informed by its system of logic and its views on the natural world. According to its teachings, as social beings, the path to eudaimonia (happiness) for humans is found in accepting the moment as it presents itself, by not allowing oneself to be controlled by the desire for pleasure or fear of pain, by using one's mind to understand the world and to do one's part in nature's plan, and by working together and treating others fairly and justly. Stoicism flourished throughout the Roman and Greek world until the 3rd century AD, and among its adherents was Emperor Marcus Aurelius. It experienced a decline after Christianity became the state religion in the 4th century AD.

Night terror Sleep disorder causing feelings of panic or dread Medical condition We ask you, humbly: don't scroll away. Hi reader, this Tuesday, for the 5th time recently, we ask you to protect Wikipedia's independence. Thanks to the 2% of readers who donate, Wikipedia and the free knowledge movement are thriving. Rapid eye movement sleep Rapid eye movement (REM) sleep is a stage of sleep characterized by the rapid and random movement of the eyes. Rapid eye movement sleep is classified into two categories: tonic and phasic.[1] It was identified and defined by Nathaniel Kleitman and his student Eugene Aserinsky in 1953. Criteria for REM sleep includes rapid eye movement, low muscle tone and a rapid, low-voltage EEG; these features are easily discernible in a polysomnogram,[2] the sleep study typically done for patients with suspected sleep disorders.[3] REM sleep typically occupies 20–25% of total sleep, about 90–120 minutes of a night's sleep.

brain explorer The central nervous system (CNS) consists of the brain and the spinal cord, immersed in the cerebrospinal fluid (CSF). Weighing about 3 pounds (1.4 kilograms), the brain consists of three main structures: the cerebrum, the cerebellum and the brainstem. Cerebrum - divided into two hemispheres (left and right), each consists of four lobes (frontal, parietal, occipital and temporal). The outer layer of the brain is known as the cerebral cortex or the ‘grey matter’. It covers the nuclei deep within the cerebral hemisphere e.g. the basal ganglia; the structure called the thalamus, and the ‘white matter’, which consists mostly of myelinated axons.

German philosophy German philosophy, here taken to mean either (1) philosophy in the German language or (2) philosophy by Germans, has been extremely diverse, and central to both the analytic and continental traditions in philosophy for centuries, from Gottfried Wilhelm Leibniz through Immanuel Kant, Georg Wilhelm Friedrich Hegel, Arthur Schopenhauer, Karl Marx, Friedrich Nietzsche, Martin Heidegger and Ludwig Wittgenstein to contemporary philosophers. Søren Kierkegaard (a Danish philosopher) is frequently included in surveys of German (or Germanic) philosophy due to his extensive engagement with German thinkers.[1][2][3][4] 17th century[edit]

Dream yoga - Wikipedia, the free encyclopedia Dream Yoga or Milam[1] (T:rmi-lam or nyilam; S:svapnadarśana)[2] — the Yoga of the Dream State are a suite of advanced tantric sadhana of the entwined Mantrayana lineages of Dzogchen (Nyingmapa, Ngagpa, Mahasiddha, Kagyu and Bönpo). Dream Yoga are tantric processes and techniques within the trance Bardos of Dream and Sleep (Tibetan: mi-lam bardo) and are advanced practices similar to Yoga Nidra. Aspects of Dream Yoga sadhana are subsumed within the practice suite of the Six Yogas of Naropa. False awakening Vivid and convincing dream about awakening from sleep We ask you, humbly: don't scroll away. Hi reader, this Tuesday, for the 2nd time recently, we ask you to protect Wikipedia's independence. Thanks to the 2% of readers who donate, Wikipedia and the free knowledge movement are thriving. If you benefit from Wikipedia, please donate to keep it growing. The price of a cup of coffee is all we need.

Sleep paralysis Sleep state in which a person is awake but unable to move or speak Medical condition We ask you, humbly: don't scroll away. Forer effect A related and more general phenomenon is that of subjective validation.[1] Subjective validation occurs when two unrelated or even random events are perceived to be related because a belief, expectation, or hypothesis demands a relationship. Thus people seek a correspondence between their perception of their personality and the contents of a horoscope. Forer's demonstration[edit]