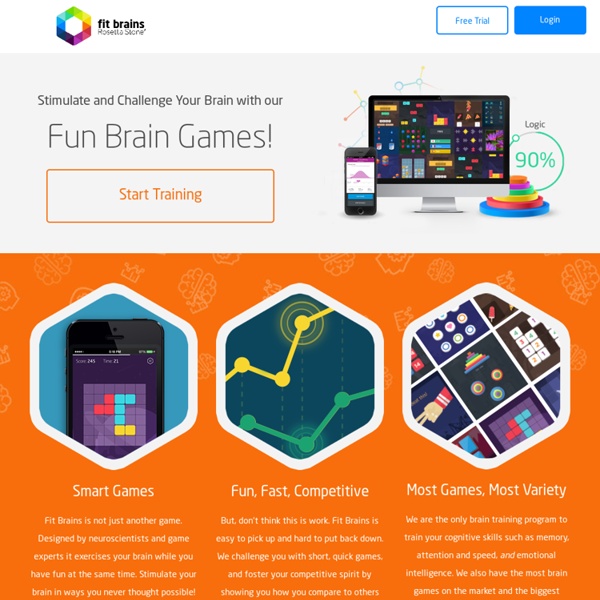 What Our Users Are Saying Don't just take our word for it, our users have been having great results by training for just 10 minutes per day. Melanie Lee "Since starting Fit Brains, I find that I'm more sharp and alert with everyday tasks." Lisa Peterson "I've been training with Fit Brains over the last month and notice huge improvements with my memory."

8 Awesome Free Open-Source Games You Can Enjoy On Windows, Mac and Linux We don’t only bring you great free applications and tools here at MakeUseOf. We also understand that you like your downtime too, and what better way to waste some time than with some free open source games? Maybe you’re a fan of cutesy 2D platformers? Or do you prefer staring down the barrel of a shotgun and shouting “pwned“ after every kill? 100 Amazing Memory Hacks to Maximize Your Brain March 4th, 2010 Students, business professionals, and average Janes and Joes–just about everyone would love to have a fool-proof memory, and with these amazing memory hacks, you can. These suggestions, tools, and tricks are sure to have you using your brain to the best of its abilities, whether you need to remember a semester’s worth of Biology 101, keep finding yourself in the awkward spot of not remembering names, or anywhere in between. Remembering Names

The Creative Power of Thinking Outside Yourself New research suggests we generate more creative ideas for other people than for ourselves. The hackneyed expression “thinking outside the box” is thought to come from the puzzle below. The idea is to try and join up all the dots using four straight lines or fewer without taking your pen off the paper or tracing over the same line twice. The ‘box’ that the expression refers to is the implicit one formed in your mind by the dots. To get the solution you have to ignore this implicit box: you have to, as it were, think outside it. (If you’re stuck in the box, google the ‘nine dots’ puzzle for the solution.)

BrainStuff with Marshall Brain - The Blogs at HowStuffWorks We wanted to let you know that Marshall Brain will be leaving Discovery and HowStuffWorks to pursue new ventures and opportunities. Over the past 13 years, Marshall created HowStuffWorks from scratch and then helped grow it into the company that it has become today – a site with almost 20 million unique visitors a month. […] If you go to 300house.com you can learn about a fascinating project/contest whose goal is to design a $300 house for the world’s two billion poorest inhabitants: We started with five simple questions: * How can organic, self-built slums be turned into livable housing?

Mental Modifications To Boost IQ There are many little things you can do to boost your IQ and mental powers. Making small changes in what happens in your mind and the way you think, is all that's needed to gently push your mind in the right direction. We talk about some of these things below: 1. 10 Ways to Enrich Your Life by Learning Something New “When I learn something new – and it happens every day – I feel a little more at home in this universe, a little more comfortable in the nest.” – Bill Moyers We often get so entrenched in our daily routines that we forget to learn on a daily basis. Lifehacks, GTD, family, work, and social networking are all great ways to grow and enjoy life. They provide new experience and insight while offering endless opportunites for daily learning.

Gifted Adults Personal GrowthGifted Adults Have people ever called you "too intense" or perhaps "too driven"? Or maybe people have said "Why don't you slow down?" or "Can't you do just one thing?" Do you have a habit of starting a new book to read before you have finished the old one? Is there only one person in a hundred who understands your jokes? 22 Killer Personal Development Resources You're Missing Out On You’ve got the personal development itch once again. You know the feeling. Maybe you want to be more productive, finally tackle that goal of yours, or start waking up earlier. So you go to Google or your favorite personal development blogs. Maybe if you still haven’t found what you’re looking for you try searching for a Youtube video or ask your Facebook friends if they know of any good sites. And that’s it.

Many-worlds interpretation The quantum-mechanical "Schrödinger's cat" paradox according to the many-worlds interpretation. In this interpretation, every event is a branch point; the cat is both alive and dead, even before the box is opened, but the "alive" and "dead" cats are in different branches of the universe, both of which are equally real, but which do not interact with each other.[1] The many-worlds interpretation is an interpretation of quantum mechanics that asserts the objective reality of the universal wavefunction and denies the actuality of wavefunction collapse. Many-worlds implies that all possible alternate histories and futures are real, each representing an actual "world" (or "universe"). In lay terms, the hypothesis states there is a very large—perhaps infinite[2]—number of universes, and everything that could possibly have happened in our past, but did not, has occurred in the past of some other universe or universes. Outline[edit]

Techniques for Creative Thinking Collectively, there are several hundred techniques published in books by Michael Michalko, Andy Van Gundy, James Higgins, Dilip Mukerjea and others. Techniques are like tools in a workshop, with different tools for different parts of the creative process. For example, there are techniques for defining a problem, exploring attributes of a problem, generating alternatives, visual explorations, metaphors, analogies, and evaluating and implementing ideas. Here is a small selection of techniques:

Triple Nine Society The Triple Nine Society (TNS), founded in 1978, is a 501(c)(7) non-profit voluntary association of adults who have scored at or above the 99.9th percentile on specific IQ tests (or similar) under supervised conditions, which generally corresponds to an IQ of 149 or greater using a standard deviation of 16 (e.g. Stanford-Binet IV) and 146 or greater with a standard deviation of 15 (e.g. WAIS-IV, Stanford-Binet 5).[1] This compares with Mensa International, the better-known and larger membership high IQ society which admits applicants who score at or above the 98th percentile, which generally corresponds with an IQ score of 131 (SD 15) or 133 (SD 16), or greater. As of mid-March 2015, TNS reported over 1,500 members residing in more than 40 countries, with most members residing in the United States and Europe.[2] TNS publishes a journal entitled Vidya which contains articles, poetry and other creative content contributed by members conversant with a variety of subjects. References[edit]

Brainstorming - Brainstorming Techniques from MindTools Generating Many Radical, Creative Ideas Brainstorm better with James Manktelow & Amy Carlson. How often have you used brainstorming to solve a problem? Chances are, you've used it at least once, even if you didn't realize it.

Mensa International Founding[edit] Roland Berrill, an Australian barrister, and Dr. Lancelot Ware, a British scientist and lawyer, founded Mensa at Lincoln College, in Oxford, England, in 1946. They had the idea of forming a society for very intelligent people, the only qualification for membership being a high IQ.[6] It was to be non-political and free from all social distinctions (racial, religious, etc.).[9] American Mensa was the second major branch of Mensa.