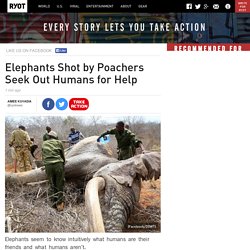 In August, after poachers shot three wild elephants with poisoned arrows, the animals traveled far and wide to reach a place they knew would help: the Kenya-based David Sheldrick Wildlife Trust. One of the elephants had been friends — or rather lovers — with two orphan elephants who’d been raised at the DSWT’s Ithumba Reintegration Centre and eventually went on to lead their own herds in the wild. With them, he raised two babies, named Mwende and Yetu by DSWT, in 2011, The Dodo reports.

The injured elephant had never resided at the center, but somehow knew the humans who worked there would rescue him and his two friends, says DSWT. If someone almost died from a venomous snake bite, chances are the person would steer clear of the slithery creatures for the rest of his or her life. DSWT says they’re recovering quite well and appear to be grateful for the care they received. Aimee Kuvadia STAFF. Elephant cognition. Elephants are amongst the world's most intelligent species. 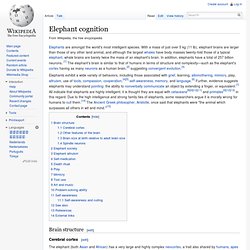 With a mass of just over 5 kg (11 lb), elephant brains are larger than those of any other land animal, and although the largest whales have body masses twenty-fold those of a typical elephant, whale brains are barely twice the mass of an elephant's brain. In addition, elephants have a total of 257 billion neurons. [1] The elephant's brain is similar to that of humans in terms of structure and complexity—such as the elephant's cortex having as many neurons as a human brain,[2] suggesting convergent evolution.[3] Brain structure[edit] Cerebral cortex[edit] The elephant (both Asian and African) has a very large and highly complex neocortex, a trait also shared by humans, apes and certain dolphin species.

Asian elephants have the greatest volume of cerebral cortex available for cognitive processing of all existing land animals. Other features of the brain[edit] Brain size at birth relative to adult brain size[edit] An elephant that speaks Korean. An Asian elephant named Koshik can imitate human speech, speaking words in Korean that can be readily understood by those who know the language. 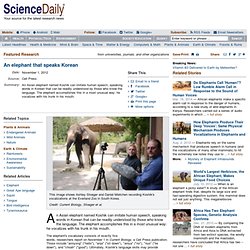 The elephant accomplishes this in a most unusual way: he vocalizes with his trunk in his mouth. The elephant's vocabulary consists of exactly five words, researchers report on November 1 in Current Biology, a Cell Press publication. Those include "annyong" ("hello"), "anja" ("sit down"), "aniya" ("no"), "nuo" ("lie down"), and "choah" ("good"). Ultimately, Koshik's language skills may provide important insights into the biology and evolution of complex vocal learning, an ability that is critical for human speech and music, the researchers say. "Human speech basically has two important aspects, pitch and timbre," says Angela Stoeger of the University of Vienna. For one thing, Stoeger says, elephants have a trunk instead of lips. There have been some earlier reports of vocal mimicry in both African and Asian elephants.

Asian Elephant Art & Conservation Project. Elephant 'self-portrait' on show. Pictures which were painted by elephants have gone on display at an Edinburgh gallery. 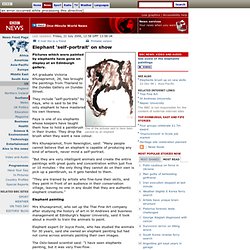 Art graduate Victoria Khunapramot, 26, has brought the paintings from Thailand to the Dundas Gallery on Dundas Street. They include "self-portraits" by Paya, who is said to be the only elephant to have mastered his own likeness. Paya is one of six elephants whose keepers have taught them how to hold a paintbrush in their trunks. They drop the brush when they want a new colour. Mrs Khunapramot, from Newington, said: "Many people cannot believe that an elephant is capable of producing any kind of artwork, never mind a self-portrait. "But they are very intelligent animals and create the entire paintings with great gusto and concentration within just five or 10 minutes - the only thing they cannot do on their own is pick up a paintbrush, so it gets handed to them.