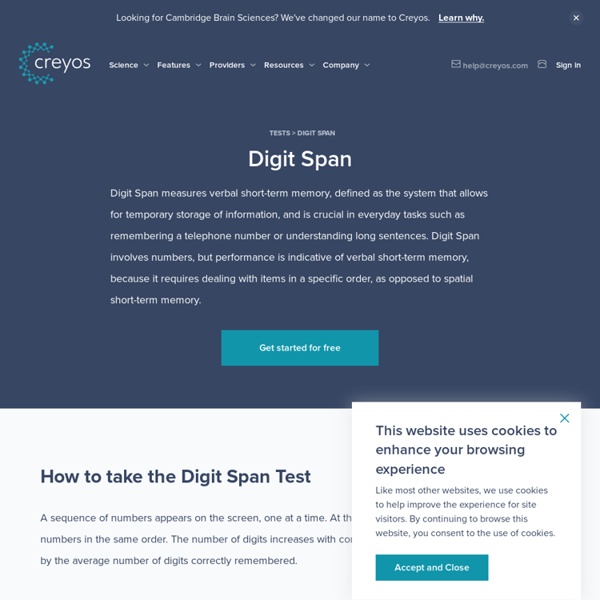 The digit span task exercises your verbal working memory. Scientists refer to working memory as the cognitive system that allows the temporary storage and manipulation of information. According to one influential cognitive theory, this system has specialised components, one of which, the 'phonological loop', underlies verbal working memory abilities (Baddeley & Hitch 1974). The phonological loop is comprised of a verbal storage system and a rehearsal system. If you do this task, you may find yourself mentally rehearsing the string of digits as they appeared on screen; this is the rehearsal system in action. It allows the visual inputs to be recoded so that they can enter your short term verbal store and it also refreshes decaying representations (that is, any item that is about to be forgotten). Verbal working memory is involved in many everyday tasks, from remembering your friend's telephone number while you enter it into your phone, to understanding long and difficult sentences.

New Words in The Oxford Dictionary ……………….Manspreading!………………… Manspreading? Human working memory is based on dynamic interaction networks in the brain A research project of the Neuroscience Center of the University of Helsinki sheds light on the neuronal mechanisms sustaining memory traces of visual stimuli in the human brain. The results show that the maintenance of working memory is associated with synchronisation of neurons, which facilitates communication between different parts of the brain. On the basis of interaction between the brain areas, it was even possible to predict the subject's individual working memory capacity. The results were published last week in the online version of the journal PNAS. The working memory of an average person can sustain only three of four objects at a time.

Umrah December 2016 We can tailor any type of package for you for December 2015. This year, Ramadan is coming different from the summer holidays unlike last year. So December is under pressure even now. Book early to avoid disappointment. We specialize in custom packages and we guarantee that you will love our services and price. What’s more, we also offer installment plans for December bookings.

Making Words Stick: Memorizing GRE Vocabulary Making Words Stick If you read this week’s posts, you know how to be a full-fledged word detective. You also have the vocabulary books that provide you with the best prep. Now, we need to talk about the process of getting words to stick in your head. Below is the magical formula for helping words stick. Come up with Clever (and Wacky) Associations IDA_Working Memory and Math Article by Berch Getting back to the White Queen’s arithmetic problem, while adding single digits should be comparatively easy for most typically achieving seven-and-a-half-year-olds (Alice’s age), it is evident from this example that one can excessively tax working memory by requiring a learner to simultaneously attend, store, and mentally process a rather large amount of information (albeit elementary in some sense) within a relatively short period of time. As Susan Gathercole, another leading researcher in this field has pointed out, overloading this fragile mental workspace can lead to “complete and catastrophic loss of information from working memory” (Gathercole, 2008, p. 382). Complete and catastrophic loss -- sadly, that's what happens all too often to math students. Obviously, no teacher would deliberately choose to overload his or her students’ working memory capacity.

Vocabulary Exercises Teaching Matters WebEnglish.se has compiled a list of 20 vocabulary exercises to practise or rehearse new words without bilingual translations. The aim is to provide the teacher with a variation of vocabulary practices and to reduce the use of translations in class. WebEnglish.se complies with the research that promotes learning new vocabulary in context and through various activities, diminishing the use of the students’ first language. Word by word translations can misinform the students of the word’s usage, variations in meaning and connotations. It also gives the pupils with another mother tongue an obvious disadvantage. Links: 20 Word exercisesWord exercises with examples

there’s more to working memory than meets the eye I’ve had several conversations on Twitter with Peter Blenkinsop about learning and the brain. At the ResearchEd conference on Saturday, we continued the conversation and discovered that much of our disagreement was because we were using different definitions of learning. Peter’s definition is that learning involves being able to actively recall information; mine is that it involves changes to the brain in response to information. working memory

The 50 most important English proverbs The 50 most important English proverbs What are proverbs? Every culture has a collection of wise sayings that offer advice about how to live your life. These sayings are called "proverbs". How can you use proverbs to learn English? 75 Simple British Slang Phrases You Should Probably Start Using Oh, the Brits. No-one can snark quite like they do, and there are certain turns of phrase that are so utterly delightful, the rest of the world really should sit up and take note. Below are just a few common British phrases that you might like to work into your daily vernacular, as they can pepper any conversation with a little extra something. Aggro: Aggressive/in someone’s face.“Are you having a laugh?”: Statement of incredulity, like “you’ve got to be kidding”, and such.

Synonym Worksheets Synonyms and Antonyms Series - The Complete Guide - Save Time! View Now... Simile Exercises - Simile Synthesis - Sentence Rewriting View Now... 18 English words that mean very different things in Britain and America As the old adage famously goes: you say tom-MAY-toes, and I say tom-MAH-toes. We should probably call the whole thing off, right? Ever since the might of the British Empire was expelled from the United States, ordinary folk from both sides of the pond have chuckled at each other's use of the English language and pronunciation. Here are several important examples you need to remember - simply to make sure no one gives you a weird look when you're off on your holidays. 1.