Science Suggests Bassists Are Far More Important Than Most People Realize. When Led Zeppelin's bassist John Paul Jones was inducted into the Rock and Roll Hall of Fame in 1995, he made a classic bass joke. 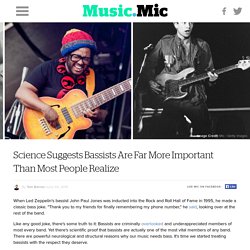 "Thank you to my friends for finally remembering my phone number," he said, looking over at the rest of the band. Like any good joke, there's some truth to it: Bassists are criminally overlooked and underappreciated members of most every band. Yet there's scientific proof that bassists are actually one of the most vital members of any band. There are powerful neurological and structural reasons why our music needs bass. It's time we started treating bassists with the respect they deserve. Holding it down. Laurel Trainor, the study's lead author, hooked up participants to an EEG to monitor brain activity while they heard simultaneous streams of two piano notes — one high-pitched, the other low-pitched. This shows just how influential a bass is in setting the whole rhythmic feel of a song.

Harmonic importance. The sound of power. Holding it down. Sight over sound in the judgment of music performance. Music Perception: An Interdisciplinary Journal, Vol. 30, No. 1 (September 2012), pp. 71-83. The Inner Nature of Music and the Experience of Tone. The psychology of music in multimedia: Paperback: Siu-Lan Tan. Edited by Siu-Lan Tan, Department of Psychology Kalamazoo College, USA, Annabel J. 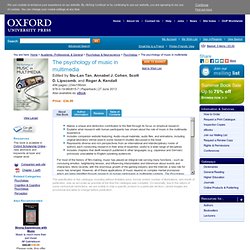 Cohen, Department of Psychology, University of Prince Edward Island, CANADA, Scott D. Lipscomb, School of Music, University of Minnesota, USA, and Roger A. Kendall, University of California, Los Angeles, USA Siu-Lan Tan is Associate Professor of Psychology at Kalamazoo College in Michigan USA. Born in Indonesia and raised in Hong Kong, she holds diplomas from the Associated Board of the Royal Schools of Music (England) and degrees in Music and Piano Pedagogy, and taught music in Hong Kong and California for many years before completing a PhD in Psychology at Georgetown University USA and a term on scholarship at Oxford University in England. Annabel J. EBL Patron: University of Texas at Austin. Cognitive science: A new research program for musicology - Interface - Volume 21, Issue 3-4.

It is shown that computational theories of music which include music perception belong to cognitive science and that the epistemological basis of cognitive science is neomechanism also called logical mechanism. 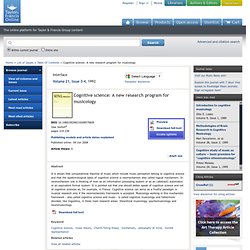 In neomechanism one is thinking of man as an information processing system or as an (abstract) automaton or an equivalent formal system. It is pointed out that one should better speak of cognitive science and not of cognitive sciences as, for example, in France. Cognitive science can serve as a fruitful paradigm in musical research only if the neomechanistic framework is accepted. Leonardo Music Journal, Vol. 18 (2008), pp. 21-24. Leonardo Music Journal, Vol. 13 (2003), pp. 31-37. Replies to The Music of Nature and the Nature of Music. This response is directed equally to this Perspective and the accompanying one by M. 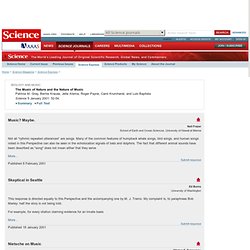 J. Tramo. My complaint is, to paraphrase Bob Marley: half the story is not being told. For example, for every citation claiming evidence for an innate basis for certain musical phenomena, I will find at least one, and usually more, citations claiming the opposite. As I wrote concerning octave equivalence, "if the results of some relevant experiments are accepted at face value, octave equivalence is shown by rats, human infants, and musicians, but not by starlings, 4- to 9-year-old children, or nonmusicians. " Given the similarities in avian and mammalian auditory systems, music signals and tonal communication signals are all subject to the same general processing constraints impossed by peripheral, and to a certain extent more central, auditory processing. ... less. 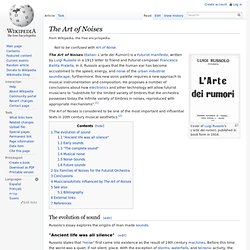 The Art of Noises is considered to be one of the most important and influential texts in 20th century musical aesthetics.[2] The evolution of sound[edit] Russolo's essay explores the origins of man made sounds. "Ancient life was all silence"[edit] Russolo states that "noise" first came into existence as the result of 19th century machines. Early sounds[edit] He notes that the earliest "music" was very simplistic and was created with very simple instruments, and that many early civilizations considered the secrets of music sacred and reserved it for rites and rituals.

"The complete sound"[edit] Musical noise[edit] Russolo compares the evolution of music to the multiplication of machinery, pointing out that our once desolate sound environment has become increasingly filled with the noise of machines, encouraging musicians to create a more "complicated polyphony"[3] in order to provoke emotion and stir our sensibilities. What Do We Mean by Giftedness? A Pentagonal Implicit Theory. Personality and music: Can traits explain how people use music in everyday life? - Chamorro-Premuzic - 2010 - British Journal of Psychology. Online.uncg.edu/courses/mue703/readings/br-teen/MacDonald2009.pdf. Conference Proceedings: Opening the Umbrella; an Encompassing View of Music Education; Australian Society for Music Education, XII National Conference, University of Sydney, NSW, Australia, 09-13 July 1999 - Music: Where Cognition and Emotion Meet (Humani.