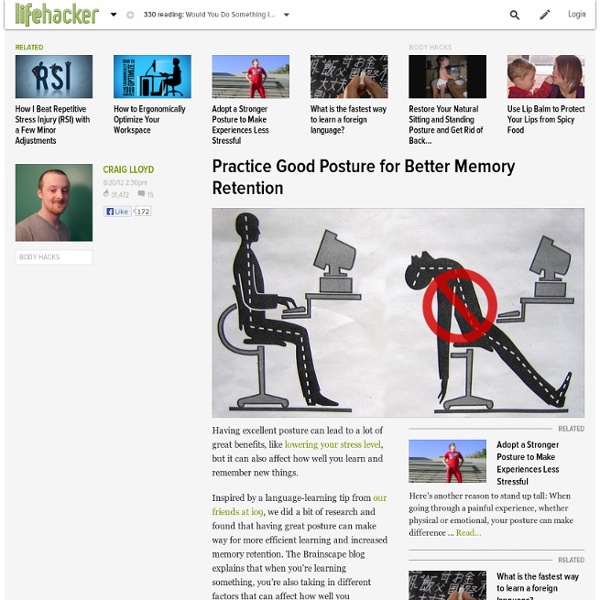 5 Body Postures That May Actually Boost Your Self-Esteem Wisdom tells us that the body is not worth as much as our inner being. However, it is our body that bridges the world into our soul. It is the means that nurtures our being not only by what our environment shows us. It is also affected by the way we choose to move and act our bodies. Try to be aware of your body posture in different environments: How do you sit up at the family dinner table?How do you stand while waiting for the bus? Do you see any difference or any pattern? Kellogg School of Management described these helpful postures as those that open up the body and take up space. It was reported that these positions activate a sense of power and produces behavioral changes in a person regardless of his role in an organization. Here are 5 body postures that will fire up your confidence and performance. Stand or Sit Up Straight (Done Always)Straighten up your back from shoulders to hips. Your body connects to your brain and emotions.

8 Easy Bodily Actions That Transform Mental Performance Jump for joy, confuse for creativity, relax for better decisions, open up for pain tolerance and more… People tend to assume that body language just expresses how we feel inside. But it also works the other way: how we hold our bodies affects how we feel and think in all sorts of fascinating ways. One of the early studies found that people who put pens in their mouths in such a way that it activates the muscles responsible for smiling, actually experienced more pleasure. In the past few years the study of how bodily posture affects the mind has exploded. Here are 8 of the latest psychological studies on what psychologists call ‘embodied cognition’, or the intimate ways in which body feeds back to mind. 1. Feeling powerful can be useful but too much power can have a weird effect on decision-making. If you just want your decisions confirmed, then a feeling of power is good. 2. There’s little doubt that people tend to associated lower voices with more power. 3. 4. 5. 6. 7. 8. → Want more?

Improve Your 'Hunched over the PC' Posture One of the most neglected aspects of our health is our posture. Amongst all the guidelines on healthy eating and workout methods, this essential facet of our well-being is often overlooked. Posture provides the foundation for a balanced workout, deeper breathing, effective digestion and efficient functioning of organs. Improving your posture will benefit your overall health, give you more energy, help rehabilitate or prevent injury and increase sporting performance. That’s a lot of benefits for such an overlooked idea and I didn’t even mention that it would help you sit at your workstation longer and work harder without cramping! Here we take a look at six core stretches that will increase your flexibility from head to toe. Stretch One: The “Superman”The aim of this stretch is to finish at 90 degree angle, leaning forward onto a stretch band or other object with your legs straight, torso horizontal and arms extended. And that’s the six stretches!

The World Factbook People from nearly every country share information with CIA, and new individuals contact us daily. If you have information you think might interest CIA due to our foreign intelligence collection mission, there are many ways to reach us. If you know of an imminent threat to a location inside the U.S., immediately contact your local law enforcement or FBI Field Office. For threats outside the U.S., contact CIA or go to a U.S. Embassy or Consulate and ask for the information to be passed to a U.S. official. In addition to the options below, individuals contact CIA in a variety of creative ways. If you feel it is safe, consider providing these details with your submission: Your full name Biographic details, such as a photograph of yourself, and a copy of the biographic page of your passport How you got the information you want to share with CIA How to contact you, including your home address and phone number We cannot guarantee a response to every message. Internet: Send a message here.

Charter of the UN: Preamble to save succeeding generations from the scourge of war, which twice in our lifetime has brought untold sorrow to mankind, and to reaffirm faith in fundamental human rights, in the dignity and worth of the human person, in the equal rights of men and women and of nations large and small, and to establish conditions under which justice and respect for the obligations arising from treaties and other sources of international law can be maintained, and to promote social progress and better standards of life in larger freedom, to practice tolerance and live together in peace with one another as good neighbours, and to unite our strength to maintain international peace and security, and to ensure, by the acceptance of principles and the institution of methods, that armed force shall not be used, save in the common interest, and to employ international machinery for the promotion of the economic and social advancement of all peoples, « Previous | Next »

Charter of the UN: Introductory Note The Charter of the United Nations was signed on 26 June 1945, in San Francisco, at the conclusion of the United Nations Conference on International Organization, and came into force on 24 October 1945. The Statute of the International Court of Justice is an integral part of the Charter. Amendments to Articles 23, 27 and 61 of the Charter were adopted by the General Assembly on 17 December 1963 and came into force on 31 August 1965. The amendment to Article 23 enlarges the membership of the Security Council from eleven to fifteen. The amendment to Article 61, which entered into force on 31 August 1965, enlarged the membership of the Economic and Social Council from eighteen to twenty-seven. « Previous | Next »

The United Nations at a Glance The UN was founded on 24 October 1945. The UN has 193 Members States. There are currently more than 100,000 UN peacekeepers in 16 peace operations. Arabic, Chinese, English, French, Russian and Spanish are the UN official languages. Did You Know? The United Nations is an international organization founded in 1945 after the Second World War by 51 countries committed to maintaining international peace and security, developing friendly relations among nations and promoting social progress, better living standards and human rights. The UN has 4 main purposes To keep peace throughout the world; To develop friendly relations among nations; To help nations work together to improve the lives of poor people, to conquer hunger, disease and illiteracy, and to encourage respect for each other’s rights and freedoms; To be a centre for harmonizing the actions of nations to achieve these goals. The work of the United Nations reaches every corner of the globe.

Today in History: October 12 Promontory of Florida Photoreproduction from Theodor de Bry and Charles de la Roncière, La Floride Française: Scènes de la vie Indiennes, peintes en 1564 [facsimile of the 1564 original (Paris, 1928)]. from the online exhibition 1492: An Ongoing Voyage Early in the morning of October 12, 1492, a sailor on board the Pinta sighted land, beginning a new era of European exploration and expansion. The next day, the ninety crewmembers of Columbus' three-ship fleet ventured onto the Bahamian island that he named San Salvador (now Watling Island, and then called Guanahaní by the natives), ending a voyage begun nearly ten weeks earlier in Palos, Spain. As a reward for his valuable discovery, the Spanish crown granted Columbus the right to bear arms. Before his final voyage, the Spanish monarchs prepared a Book of Privileges, is a collection of agreements showing how Columbus was remunerated for his explorations. Learn more about Columbus and his legacy:

4 Steps to Forgiving and Reopening Your Intuitive Channels to Greatness EmailShare This is the fourth article in my 7 part series on forgiveness. This one comes from Angela Artemis from Powered by Intuition. Angela is a psychic medium, intuition coach and author of several books about intuition. You can read more about her in her complete bio at the end. Forgiveness = Openness “I can forgive, but I cannot forget, is only another way of saying, I will not forgive. When you don’t forgive someone you are still “attached” to the person emotionally. You may think you’ve moved on but you would be wrong. When I was a kid I would pretend the people who hurt me didn’t exist. The way I could tell I hadn’t forgiven was that just hearing something about the person made my “stomach drop out.” I was drawn to learn everything I could about intuition because my own eluded me for many years. I came to realize that the reason I had so much trouble hearing my intuition was because I had been so unforgiving. Emotional disturbances block the flow of your intuition. 1. 2. 3. 4.

Hypocrisy...our government Pearl Harbor Images The 7 December 1941 Japanese raid on Pearl Harbor was one of the great defining moments in history. A single carefully-planned and well-executed stroke removed the United States Navy's battleship force as a possible threat to the Japanese Empire's southward expansion. America, unprepared and now considerably weakened, was abruptly brought into the Second World War as a full combatant. Eighteen months earlier, President Franklin D. By late November 1941, with peace negotiations clearly approaching an end, informed U.S. officials (and they were well-informed, they believed, through an ability to read Japan's diplomatic codes) fully expected a Japanese attack into the Indies, Malaya and probably the Philippines. The U.S. These great Japanese successes, achieved without prior diplomatic formalities, shocked and enraged the previously divided American people into a level of purposeful unity hardly seen before or since. Click photograph for larger image.

The Oregon Trail: Native Americans (a mini booklet) RELATIONSHIPSThe first section of the Oregon Trail bisected two major Native American tribes--the Cheyenne to the north and the Pawnee to the south. The emigrants worried about both. But the expected attacks did not come. Most of the encounters with Native Americans were simple business transactions. Within a few years, the emigrants had overgrazed the prairie grasses, burned all the available firewood, and depleted the buffalo. The emigrants worried a great deal about possible Native American attacks, but very few were ever actually killed by the native tribes. GRATTAN MASSACREPerhaps the most important confrontation with the native tribes occurred near Ft. The Sioux chief told his warriors to withhold retaliation. MASSACRE ROCKS INCIDENTFor years, the Hudson's Bay Company had been a stabilizing force on the Native Americans who lived near the Snake River--but when the British fur-trading company pulled out in the early 18 50s, attacks on emigrants increased substantially.