Our nearest relatives are quite amazing

Gorilla Learns Sign Language and Reveals what Poachers did to Family - The Story of Michael. Things You Probably Didn't Know About Cute Bonobos. Bonobos: One Of Humankind’s Closest Relatives & What They Can Teach Us. Can Apes Really "Talk" To Humans? Monkeys and Apes Have Entered The Stone Age. Moral behavior in animals. (8) How smart are orangutans? - Lu Gao. Scientists on 3 continents now have evidence: Some chimps have entered the Stone Age. This Bonobo can start his own fires and cook his own food. Orangutan from Borneo photographed using a spear tool to fish. Tool use among orangutans was first documented by Carel van Schaik. 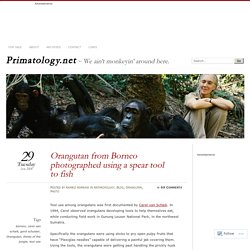 In 1994, Carel observed orangutans developing tools to help themselves eat, while conducting field work in Gunung Leuser National Park, in the northwest Sumatra. Specifically the orangutans were using sticks to pry open pulpy fruits that have “Plexiglas needles” capable of delivering a painful jab covering them. Using the tools, the orangutans were getting past handling the prickly husk and into the nutritious fruit.

From an anthropological viewpoint, tool use represents an aspect of culture, since the entire group participates in a behavior that has developed over time. One unique thing to clarify is that only Sumatran orangutans have been observed to use tools, not orangutans from Borneo. Recently, Gerd Schuster co-author of Thinkers of the Jungle: The Orangutan Report, took this photograph of, Pretty awesome image, no? Schaik, C.P., Fox, E.A., Sitompul, A.F. (1996). Like this: Like Loading... Related In "Blog" Earth - Humans are nowhere near as special as we like to think. 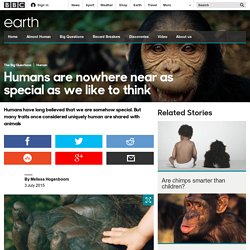 He likes oranges, cherries and grapes. He points to what he wants on a lexigram, a computerised touchscreen device on which each symbol represents a word. Kanzi can use 500 words and when he is talked to, he can understand a few thousand. We once viewed ourselves as the only creatures with emotions, morality, and culture He also likes marshmallows. Kanzi is not human. Although he cannot talk like us, Kanzi transformed our ideas about our primate relatives – and in turn, our ideas about ourselves.

Gorilla Youngsters Seen Dismantling Poachers' Traps—A First. "This is absolutely the first time that we've seen juveniles doing that ... I don't know of any other reports in the world of juveniles destroying snares," said Veronica Vecellio , gorilla program coordinator at the Dian Fossey Gorilla Fund 's Karisoke Research Center , located in the reserve where the event took place. "We are the largest database and observer of wild gorillas ... so I would be very surprised if somebody else has seen that," Vecellio added.

(Also see "Dian Fossey's Gorillas Exhumed for Investigation. " ) Bush-meat hunters set thousands of rope-and-branch snares in Rwanda's Volcanoes National Park, where the mountain gorillas live. The traps are intended for antelope and other species but sometimes capture the apes. Adults are generally strong enough to free themselves. Just last week an ensnared infant named Ngwino, found too late by workers from Karisoke, died of snare-related wounds. The hunters, Vecellio said, seem to have no interest in the gorillas. Koko Responds to a Sad Movie. Chimpanzee demonstrates its astonishing memory. Primate cognition. Origin of man now proved. 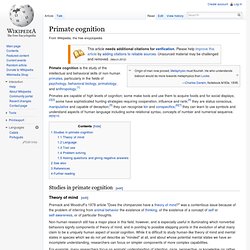 Metaphysic must flourish. He who understands baboon would do more towards metaphysics than Locke. Primate cognition is the study of the intellectual and behavioral skills of non-human primates, particularly in the fields of psychology, behavioral biology, primatology, and anthropology.[1] Primates are capable of high levels of cognition; some make tools and use them to acquire foods and for social displays;[2][3] some have sophisticated hunting strategies requiring cooperation, influence and rank;[4] they are status conscious, manipulative and capable of deception;[5] they can recognise kin and conspecifics;[6][7] they can learn to use symbols and understand aspects of human language including some relational syntax, concepts of number and numerical sequence.[8][9][10] Studies in primate cognition[edit] Theory of mind[edit] There has been some controversy over the interpretation of evidence purporting to show theory of mind ability—or inability—in animals.