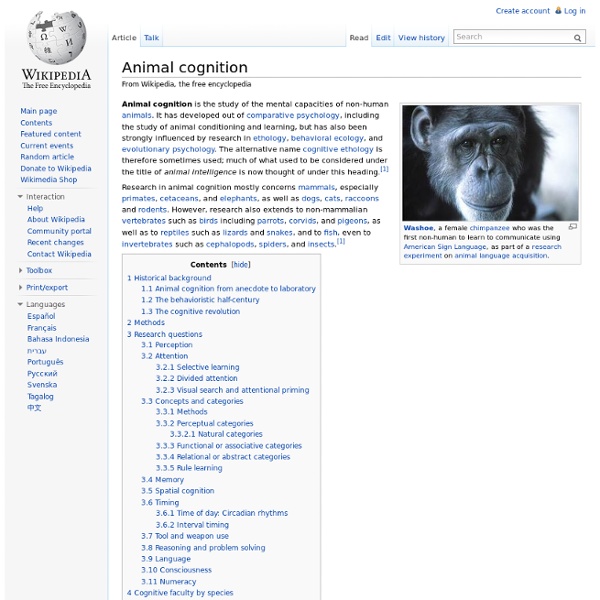 Animal cognition is the study of the mental capacities of animals. It has developed out of comparative psychology, including the study of animal conditioning and learning, but has also been strongly influenced by research in ethology, behavioral ecology, and evolutionary psychology. The alternative name cognitive ethology is therefore sometimes used; much of what used to be considered under the title of animal intelligence is now thought of under this heading.[1] Research has examined animal cognition in mammals (especially primates, cetaceans, elephants, dogs, cats, horses,[2][3] raccoons and rodents), birds (including parrots, corvids and pigeons), reptiles (lizards and snakes), fish and invertebrates (including cephalopods, spiders and insects).[1] Historical background[edit] Animal cognition from anecdote to laboratory[edit] The behavioristic half-century[edit] The work of Thorndike, Pavlov and a little later of the outspoken behaviorist John B. The cognitive revolution[edit] Related:  Animal cognition

Primate cognition Origin of man now proved. Metaphysic must flourish. He who understands baboon would do more towards metaphysics than Locke. Primate cognition is the study of the intellectual and behavioral skills of non-human primates, particularly in the fields of psychology, behavioral biology, primatology, and anthropology.[1] Primates are capable of high levels of cognition; some make tools and use them to acquire foods and for social displays;[2][3] some have sophisticated hunting strategies requiring cooperation, influence and rank;[4] they are status conscious, manipulative and capable of deception;[5] they can recognise kin and conspecifics;[6][7] they can learn to use symbols and understand aspects of human language including some relational syntax, concepts of number and numerical sequence.[8][9][10] Studies in primate cognition[edit] Theory of mind[edit] There has been some controversy over the interpretation of evidence purporting to show theory of mind ability—or inability—in animals.

Video shows tool use by a fish The first video of tool use by a fish has been published in the journal Coral Reefs by Giacomo Bernardi, professor of ecology and evolutionary biology at the University of California, Santa Cruz. In the video, an orange-dotted tuskfish digs a clam out of the sand, carries it over to a rock, and repeatedly throws the clam against the rock to crush it. Bernardi shot the video in Palau in 2009. "What the movie shows is very interesting. The animal excavates sand to get the shell out, then swims for a long time to find an appropriate area where it can crack the shell," Bernardi said. The actions recorded in the video are remarkably similar to previous reports of tool use by fish. "Wrasses are very inquisitive animals," Bernardi said. Wrasses are one of the largest and most diverse families of marine fishes. Tool use was once considered an exclusively human trait, and Jane Goodall's reports of tool use in chimpanzees in the 1960s came as a stunning revelation.

Elephant cognition Elephants are amongst the world's most intelligent species. With a mass of just over 5 kg (11 lb), elephant brains are larger than those of any other land animal, and although the largest whales have body masses twenty-fold those of a typical elephant, whale brains are barely twice the mass of an elephant's brain. In addition, elephants have a total of 257 billion neurons. [1] The elephant's brain is similar to that of humans in terms of structure and complexity—such as the elephant's cortex having as many neurons as a human brain,[2] suggesting convergent evolution.[3] Brain structure[edit] Cerebral cortex[edit] The elephant (both Asian and African) has a very large and highly complex neocortex, a trait also shared by humans, apes and certain dolphin species. Asian elephants have the greatest volume of cerebral cortex available for cognitive processing of all existing land animals. Other features of the brain[edit] Brain size at birth relative to adult brain size[edit] Spindle neurons[edit]

Animal Intelligence: Birds That Use Tools Animal Intelligence: Birds That Use Tools RELATED TOPICS: Animals The aptly named Dr. Chris Bird discovers the remarkable problem-solving abilities of birds like crows and rooks RELATED Animal Intelligence: Birds That Use Tools More Video Video by Topic Popular Topics Video Series See All Video Topics » Similar Videos for: Animal Intelligence: Birds That Use Tools Sign In Not a memeber? Email address or Password is incorrect Want the Full Story? Koko's not alone: Here are 5 other animals that are almost as smart as humans. You're probably familiar with Koko, the famous gorilla who knows sign language. Does Koko understand the detailed and complex scientific concepts behind climate change? Probably not. Was her response in a recent video on the topic encouraged, edited, and maybe even scripted? But who cares? And Koko isn't the only animal to show signs of self-awareness. Obviously we can't look into a living brain to decide if it has a higher consciousness. This is generally referred to as "Theory of Mind" — the ability to recognize the self and empathize with others. This magical button delivers Upworthy stories to you on Facebook: Again, just because an animal possesses Theory of Mind doesn't mean their thought processes are as highfalutin as us self-important human-types. Here are five more species that act surprisingly human. 1. Photo by Matt King/Stringer/Getty Images. Apes in general are closely related to humans on the evolutionary ladder, but gorillas like Koko aren't the only intelligent ones. 2. 3.

Dolphins 'call each other by name' 22 July 2013Last updated at 19:02 ET By Rebecca Morelle Science reporter, BBC World Service The research sheds new light on the intelligence of dolphins Scientists have found further evidence that dolphins call each other by "name". Research has revealed that the marine mammals use a unique whistle to identify each other. A team from the University of St Andrews in Scotland found that when the animals hear their own call played back to them, they respond. The study is published in the Proceedings of the National Academy of Sciences. Dr Vincent Janik, from the university's Sea Mammal Research Unit, said: "(Dolphins) live in this three-dimensional environment, offshore without any kind of landmarks and they need to stay together as a group. "These animals live in an environment where they need a very efficient system to stay in touch." Signature whistles It had been-long suspected that dolphins use distinctive whistles in much the same way that humans use names. Continue reading the main story

Researcher decodes prairie dog language, discovers they've been talking about us (Video) You might not think it to look at them, but prairie dogs and humans actually share an important commonality -- and it's not just their complex social structures, or their habit of standing up on two feet (aww, like people). As it turns out, prairie dogs actually have one of the most sophisticated forms of vocal communication in the natural world, really not so unlike our own. After more than 25 years of studying the calls of prairie dog in the field, one researcher managed to decode just what these animals are saying. And the results show that praire dogs aren't only extremely effective communicators, they also pay close attention to detail. According to Dr. And, when they're talking about humans, that might not always be flattering. "For example, a human alarm call not only contains information about the intruder being a human, but also contains information about the size, shape (thin or fat), and color of clothes the human is wearing," says Dr. For more information on Dr.

The Dolphin Institute - Dolphin Research Echolocation is the process of detecting and identifying objects by emitting sounds, such as the broadband clicks used by dolphins, and listening to the echoes returning from objects reflecting those sounds. A recent discovery we made is that dolphins appear capable of directly perceiving the shapes of objects through echolocation. Prior to this finding, it had been generally assumed that dolphins learned to identify and recognize objects through echolocation by a process of associative learning-by comparing the echoes returning from targets with the visual appearance of those targets. Instead, our work has shown that echolocation can yield an immediate perception of the shapes of objects without any intervention by associative learning. We established this finding by asking the dolphin to inspect an object inside of a visually opaque box, using echolocation alone, and then to find a match for that object from among two or more objects inspected through vision alone. Pack, A.

Oh My God, Fish Can Recognise Human Faces It’s enough to make this writer seriously consider vegetarianism: A new study has found that fish can recognise human faces. The paper, published in Scientific Reports, found that archerfish—a tropical species that can shoot water jets from its mouth—could learn to distinguish an image of an individual human’s face from others, even when the pictures were controlled for colour and head shape. Lead author Cait Newport said that the motivation of the work was to better understand how humans recognise faces. “We wanted to disentangle these two ideas and see if we could use another species to figure out if we do in fact need really specialised cells, or if maybe something else that doesn’t have these specialised cells can learn this task,” Newport said. The researchers showed their four fish two faces on a monitor over their aquarium and taught them to spit at one but not the other for a food reward. “I actually did try to do a small pilot study with PhD students,” she said.