How can I improve my short term memory? 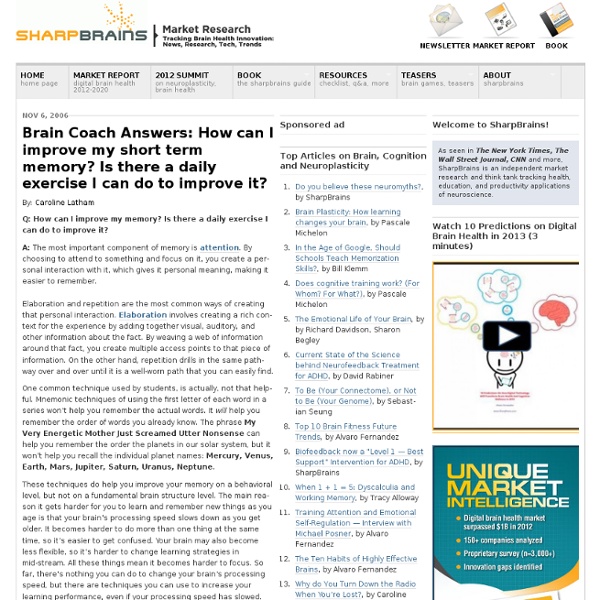 Q: How can I improve my mem­ory? Is there a daily exer­cise I can do to improve it? A: The most impor­tant com­po­nent of mem­ory is atten­tion. By choos­ing to attend to some­thing and focus on it, you cre­ate a per­sonal inter­ac­tion with it, which gives it per­sonal mean­ing, mak­ing it eas­ier to remember. Elab­o­ra­tion and rep­e­ti­tion are the most com­mon ways of cre­at­ing that per­sonal inter­ac­tion. One com­mon tech­nique used by stu­dents, is actu­ally, not that help­ful. These tech­niques do help you improve your mem­ory on a behav­ioral level, but not on a fun­da­men­tal brain struc­ture level. Focus Alert­ness, focus, con­cen­tra­tion, moti­va­tion, and height­ened aware­ness are largely a mat­ter of atti­tude. If you want to learn or remem­ber some­thing, con­cen­trate on just that one thing. Strat­egy: When you learn some­thing new, take breaks so that the facts won’t inter­fere with one another as you study them. Keep read­ing… Related:  Visual Thinking • Memento

60 Small Ways to Improve Your Life in the Next 100 Days Contrary to popular belief, you don’t have to make drastic changes in order to notice an improvement in the quality of your life. At the same time, you don’t need to wait a long time in order to see the measurable results that come from taking positive action. All you have to do is take small steps, and take them consistently, for a period of 100 days. Below you’ll find 60 small ways to improve all areas of your life in the next 100 days. Home 1. Day 1: Declutter MagazinesDay 2: Declutter DVD’sDay 3: Declutter booksDay 4: Declutter kitchen appliances 2. If you take it out, put it back.If you open it, close it.If you throw it down, pick it up.If you take it off, hang it up. 3. A burnt light bulb that needs to be changed.A button that’s missing on your favorite shirt.The fact that every time you open your top kitchen cabinet all of the plastic food containers fall out. Happiness 4. 5. 6. How many times do you beat yourself up during the day? 7. Learning/Personal Development 8. 9. 10. 11. 12. 13.

Why do You Turn Down the Radio When You’re Lost? You’re dri­ving through sub­ur­bia one evening look­ing for the street where you’re sup­posed to have din­ner at a friend’s new house. You slow down to a crawl, turn down the radio, stop talk­ing, and stare at every sign. Why is that? Nei­ther the radio nor talk­ing affects your vision. Or do they? In talk­ing about using a cell phone while dri­ving, Steven Yantis, a professor in the Department of Psychological and Brain Sciences at Johns Hop­kins Uni­ver­sity, had this to say: “Directing attention to listening effectively ‘turns down the volume’ on input to the visual parts of the brain. He's talking about divided attention, or the ability to multitask and pay attention to two things at once. Your attentional capacity can be taken up by inhibiting (tuning out) distractions, dividing your attention across multiple things, or even sustaining your attention on one thing (vigilance). How to Divide Your Attention More Effectively Do very different tasks.

Physical Exercise and Brain Health What is the con­nec­tion between phys­i­cal and men­tal exer­cises? Do they have addi­tive effects on brain health? Are they redundant? Let’s start by review­ing what we know about the effects of phys­i­cal exer­cise on the brain. The effect of phys­i­cal exer­cise on cog­ni­tive performance Early stud­ies com­pared groups of peo­ple who exer­cised to groups of peo­ple who did not exer­cise much. Lau­rin and col­leagues (2001) even sug­gested that mod­er­ate and high lev­els of phys­i­cal activ­ity were asso­ci­ated with lower risk for Alzheimer’s dis­ease and other dementias. The prob­lem with these stud­ies is that the exer­cis­ers and the non-exercisers may dif­fer on other fac­tors than just exer­cise. The solu­tion to this prob­lem is to ran­domly assigned peo­ple to either an aer­o­bic train­ing group or a con­trol group. In 2003, Col­combe and Kramer, ana­lyzed the results of 18 sci­en­tific stud­ies pub­lished between 2000 and 2001 that were con­ducted in the way described above.

On the Fallibility of Memory and the Importance of Evidence As we await the vote on Brett Kavanaugh’s confirmation and the results of the ongoing FBI investigation, America is left to ruminate a little longer on the testimonies he and Christine Blasey Ford gave before the U.S. Senate Judiciary Committee. Both were highly emotional and heartfelt. The Constructive Nature of Episodic Memory Sometime in the early 1980s, Sigmund Freud’s theories of the subconscious and the psychosexual stages of childhood experienced a resurgence in popular culture. This paved the way for a decade of “uncovering” of memories, whose technique, particularly in children, was fraught with suggestion, and which culminated in bizarre and tragic phenomena such as the McMartin Preschool case of the late ’80s, in which innocent adults were falsely imprisoned on the basis of children’s suggested “memories” of often lurid and theatrical sexual abuse. For this reason, memories are subject to what is known as the Misinformation Effect. The Misinformation Effect Flashbulb Memories

Home - Visual Thinking Strategies Brain Fitness Program and Neuroplasticity Update (11/10/10): Have you seen PBS great spe­cials on Brain Fit­ness and Neu­ro­plas­tic­ity ? The Brain Fit­ness Pro­gram DVD ($24.95) “The Brain Fit­ness Pro­gram is based on the brain’s abil­ity to change and adapt, even rewire itself. brain. PBS aired in Decem­ber 2007 a spe­cial pro­gram on neu­ro­plas­tic­ity, brain fit­ness, aging and the brain titled “Brain Fit­ness Pro­gram”. In 2008, PBS released a sec­ond DVD: Brain Fit­ness 2: Sight and Sound DVD ($24.95) “This pro­gram, specif­i­cally designed to help peo­ple get the most from their vision and hear­ing as they age, con­sid­ers how these senses change through­out life and what peo­ple can do to keep them healthy and fully functional.” If you do not have time to watch these great doc­u­men­taries, here are a few points one needs to under­stand about neuroplasticity: 1. 2. 3. To read about evi­dence of neu­ro­plas­tic­ity in the human brain take a look at Brain plas­tic­ity: How learn­ing changes you brain

Exercise Improves Old Brains The moment of truth has arrived, again. The holidays have passed, the leftovers are dwindling and you have renewed your annual New Year's resolution to get back into shape... for real. Don't worry, you are not alone. As we get older, those extra pounds start to affect other areas of our health, contributing to the onset of diabetes, hypertension, high cholesterol and even sexual function. Several new studies in the last month have now built stronger links between our levels of physical activity and the health of our most important body part, the brain. Shrinking brain According to John Ratey, clinical associate professor of psychiatry at Harvard Medical School and author of "Spark: the revolutionary new science of exercise and the brain" (2008, Little, Brown), "Age happens. Starting at age 40, we lose about 5 percent of our brain volume per decade, but then at age 70 other conditions may start to accelerate the deterioration. What the aging brain needs is a pumped-up blood flow.

Sleep, Tetris, Memory and the Brain As part of our ongo­ing Author Speaks Series, we are hon­ored to present today this excel­lent arti­cle by Dr. Shan­non Mof­fett, based on her illu­mi­nat­ing and engag­ing book. Enjoy! (and please go to sleep soon if you are read­ing this late Mon­day night). Two years ago I fin­ished a book on the mind/brain, called The Three Pound Enigma: The Human Brain and the Quest to Unlock its Mys­ter­ies . Fast-forward to the present, when I am a res­i­dent in emer­gency med­i­cine at a busy inner-city trauma cen­ter; I have two-year-old twins and a hus­band with a 60-hour-a-week job of his own. Sleep is so obvi­ous a phys­i­o­logic need (from insects to mam­mals, all ani­mals sleep) that it doesn’t even occur to most of us to won­der why we have to do it—why in the world would we need to lie down, par­a­lyzed, for a third of our lives, with our brains in some sort of auto-pilot chaos?

Recession and real estate in India Manoj Pant, ET Bureau Feb 13, 2009, 03.02am IST In an earlier article (ET, Nov 19) I had argued that the current global recession has clearly dominant Keynesian features. The crucial issue is not just the fact that there is a demand contraction but that this has been brought about by a market failure which fuels adverse expectations on the part of both producers and consumers. These adverse expectations lead to reduced production by producers anticipating lack of demand and increased savings by consumers anticipating lack of jobs. In the absence of government intervention (which fills in the missing demand) it is not clear when and how such expectations get reversed. However, it is still foolhardy to guess when exactly the current recession would come to an end. The crucial role of expectations is also clear from the fact that monetary policy has successfully driven interest rates to near zero levels in most OECD countries and yet there is still no sign of demand recovery.

Hippocampal clock regulates memory retrieval via Dopamine and PKA-induced GluA1 phosphorylation Mice Mice (male and female, at least 8 weeks of age) were housed in cages of 5 or 6, maintained on a 12 h light/dark schedule, and allowed ad libitum access to food and water in their home cages. GluA1 S845A knockin mice were obtained from Jackson Laboratory (stock number 012613)41,42. All of the experiments were conducted according to the Guide for the Care and Use of Laboratory Animals, Japan Neuroscience Society and Tokyo University of Agriculture. Generation of transgenic mice Transgenic mice were generated as described previously43,44. Administration of Dox TRE promoter-dependent transgene expression was regulated using the animal’s (dnBMAL1 and WT mice) drinking water containing 100 μg/mL Dox (Sigma-Aldrich, St Louis, MO, USA) dissolved in 5% sucrose to mask the bitter taste of Dox. RNA analyses RNA-sequencing Total RNA from hippocampus was isolated using the RNeasy Mini Kit (Qiagen) according to the manufacturer’s instructions. Chromatin immunoprecipitation (ChIP) AAV experiments

Time on the Brain: How You Are Always Living In the Past, and Other Quirks of Perception I always knew we humans have a rather tenuous grip on the concept of time, but I never realized quite how tenuous it was until a couple of weeks ago, when I attended a conference on the nature of time organized by the Foundational Questions Institute. This meeting, even more than FQXi’s previous efforts, was a mashup of different disciplines: fundamental physics, philosophy, neuroscience, complexity theory. Crossing academic disciplines may be overrated, as physicist-blogger Sabine Hossenfelder has pointed out, but it sure is fun. Neuroscientist Kathleen McDermott of Washington University began by quoting famous memory researcher Endel Tulving, who called our ability to remember the past and to anticipate the future “mental time travel.” McDermott outlined the case of Patient K.C., who has even worse amnesia than the better-known H.M. on whom the film Memento was based. Tellingly, not only can he not recall the past, he can’t envision the future. Alas, they couldn’t.

Declarative Memory (Explicit Memory) and Procedural Memory (Implicit Memory) - Types of Memory Long-term memory is often divided into two further main types: explicit (or declarative) memory and implicit (or procedural) memory. Declarative memory (“knowing what”) is memory of facts and events, and refers to those memories that can be consciously recalled (or "declared"). It is sometimes called explicit memory, since it consists of information that is explicitly stored and retrieved, although it is more properly a subset of explicit memory. Declarative memory can be further sub-divided into episodic memory and semantic memory. Procedural memory (“knowing how”) is the unconscious memory of skills and how to do things, particularly the use of objects or movements of the body, such as tying a shoelace, playing a guitar or riding a bike. These different types of long-term memory are stored in different regions of the brain and undergo quite different processes.