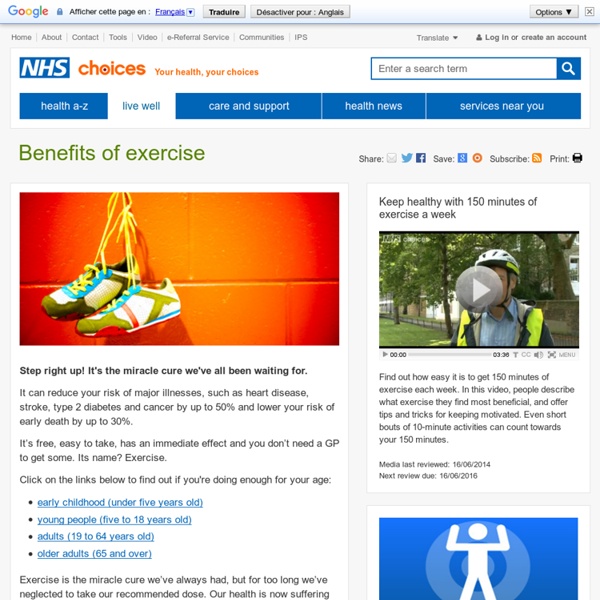 Step right up! It's the miracle cure we've all been waiting for. It can reduce your risk of major illnesses, such as heart disease, stroke, type 2 diabetes and cancer by up to 50% and lower your risk of early death by up to 30%. It’s free, easy to take, has an immediate effect and you don’t need a GP to get some. Its name? Click on the links below to find out if you're doing enough for your age: Exercise is the miracle cure we’ve always had, but for too long we’ve neglected to take our recommended dose. This is no snake oil. People who do regular activity have a lower risk of many chronic diseases, such as heart disease, type 2 diabetes, stroke, and some cancers. Research shows that physical activity can also boost self-esteem, mood, sleep quality and energy, as well as reducing your risk of stress, depression, dementia and Alzheimer’s disease. “If exercise were a pill, it would be one of the most cost-effective drugs ever invented,” says Dr Nick Cavill, a health promotion consultant.

Corporate Communities | Will the Olympics create a healthier, more active nation or leave a trail of fast food wrappers as its legacy? The Effects of Exercise on the Body Systems According to a report by the British Broadcasting Corporation report, the effects of exercise on your various body systems are felt both immediately and over time. When you begin exercising, you'll be aware of more frequent muscle contraction, an elevated body temperature and heart rate and an increase in your breathing rate. As your body adapts to a regular exercise regimen, you'll see longer-term positive training effects, such as a larger heart, denser bones and an ability to breathe more deeply. According to the Merck Manual, you lose muscle mass, strength and bone density as you age, although your losses can be significantly blunted, by performing exercise on a regular basis. The immediate effects of exercise on your muscular system includes more frequent muscle contraction, improved circulation of blood to your muscles and an increase in your muscle temperature.

Why fit is fashionable for women | Register of Exercise Professionals UK A slim and slender frame is often viewed as the most coveted body shape for females. This ideal is reinforced by the media, fashion industry and popular culture on a daily basis. Magazines, adverts and model campaigns all show evidence of this aesthetic being lauded, and anything that deviates from it being considered less appealing. The coveting of this form appears to dictate that only skinny is desirable, showing little acknowledgment of any other form being remotely appealing. Thankfully, there appears to be a new influx of women who are shunning this perceived ideal in favour of a healthier, more toned physique. The public reaction to this pictorial suggests healthy bodies are beginning to get the recognition they deserve. ‘In total awe of Jess Ennis’ abs on the front cover of @sportsmaguk today. ‘Stunning image of the iconic @J_Ennis on the front of @sportmaguk. ‘Woah, HOW awesome does @J_Ennis look in today’s @sportmaguk? Speaking to Newsnight’s Zoe Conway, Lawrence said:

muscles and bones Britain's Olympic success leads to record boost in sport participation | Sport Britain's Olympic success has helped contribute to a record boost in the number of people playing sport, according to figures released by Sport England. The grassroots funding body said that the number of adults playing sport at least once a week had increased by 750,000 in the past year. Following a Games in which successful female athletes were particularly to the fore, the funding body that invests £240m a year in grassroots sport also said that its latest figures showed the strongest growth in participation numbers had been among women. An increase of half a million in the past year had helped to cut the gap that still exists between male and female participation. Amid intense scrutiny of whether the London 2012 Games will buck the trend of previous Olympics and deliver on Lord Coe's promise that it would inspire more people to play more sport, Sport England's Active People survey also showed sharp increases in successful Olympic sports such as cycling and sailing.

Cardiovascular Effects of Exercise Robert J. Kosinski Clemson University rjksn@clemson.edu Last updated February 2009 The purpose of this page is to help students in Biology 111 at Clemson University write papers on an exercise physiology experiment. Exercise as a Challenge to HomeostasisHeart Rate and Cardiac OutputThe Double ProductVelocity of Blood FlowBlood PressureResting and Exercising Data for Young AdultsECG Effects of ExerciseMuscle FatigueLiterature Cited Exercise as a Challenge to Homeostasis Strenuous exercise is a severe test of homeostasis. On the other hand, a poorly-conditioned, sedentary person might only be able to increase his oxygen consumption 3 times (rather than 10 times in the trained athlete), mainly because of a circulatory system that can't carry as much blood to the muscles (Laughlin, 1999). This tremendous increase in oxygen consumption and carbon dioxide production has dramatic consequences for the circulatory system. Heart Rate and Cardiac Output Fig. 1. HRmax = 220 - age Fig. 2. Blood Pressure

Nike helped by fashion sportswear H&M unveils revamped sportswear collection Swedish retailer called upon the Swedish Olympic team to ensure its relaunched H&M Sport collection packs a high-performance punch BY Jessica Moorhouse | 04 December 2013 A preview of H&M'a new sport collection Photo: H&M High-profile sportswear collaborations are on the tip of designers' tongues at the moment. And today Swedish retail giant H&M revealed they're back in the style race with the growth of its 'H&M Sport' concept, in which they'll be exploring its collection with a jazzed up identity on January 2 - and they expect to win. READ: H&M's plans to spotlight sustainability To achieve this, the high street retailer called upon the athletes from the Swedish Olympic team to make sure their fashion performance had the ultimate practical edge. Anna-Sofie Johansson, creative head of design at the high street chain said of the collection: "Sport and fitness is becoming an increasingly important part of all of our lifestyles and the new H&M Sport is there to help you look and feel great".

H&M lines up to compete in booming sportswear market How The London Olympics Started The Sports Luxe Trend - Fashion Handbook The current sports luxe trend was boosted by the London 2012 Olympics. Colour, technology and fabric are still going for gold. It was a magical time to be in London during the 2012 Olympics. In the run up to the Games there was a lot of debate about whether London was up to it and the nation was all quiet nervous. But the moment the “Queen,” parachuted into the Olympics stadium and James Bond appeared it was clear this was to be a Games like no other. The whole country was gripped with national pride and Olympic fever and it was impossible to travel anywhere in London without seeing the Olympic symbol, it was infectious. It’s also one of the few cities in the world where you can take the underground train home and find yourself sitting next to an Olympic gold medallist on the Tube. Colour was something that really defined the Olympics. A smaller trend, but still a key one, was coloured footwear in active bright colours that featured a wet look. Share:

Fashercise - Stylishly fit » H&M Sportswear Lookbook Sportswear on the high street is booming and it’s no secret that we’re big fans of the H&M sportswear range: it’s really on trend, functional and easy on the wallet. The new collection has just dropped and it’s bigger and better than ever: this season, the sportswear is a little more technical as it was designed with the help of some of Sweden’s Olympic athletes, after it was announced that H&M has been tapped to design the Swedish team’s outfits for the Olympics in Sochi and Rio. Across different sports like yoga, running, gym and even skiing, the newly launched sportswear range features some great patterns and colours, tons of nice basics and accessories, all at H&M’s friendly prices. The sportswear collection is available in select stores, as well as online. What do you think of the new collection?