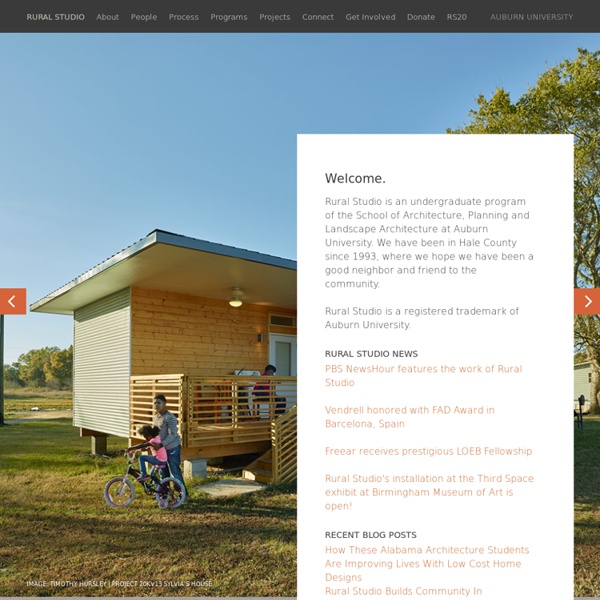 About | Urban Biofilter Urban Bioﬁlter designs, implements, and advocates for the integration of biological systems into our existing urban infrastructure. Urban Bioﬁlter is a research and design organization based in Oakland, CA and is a project of Earth Island Institute, a 501(c)3 nonproﬁt. As a collaborative team of ecological engineers, designers and community organizers, Urban Biofilter creates environmental systems appropriate to each site and community. We focus on transforming undervalued urban resources such as brownﬁelds and wastewater into community assets.

Bjarke Ingels Group This Innovative Greenhouse Makes It Possible to Grow Crops Even in the Desert! Farming can be extremely difficult in the areas that lack humidity and experience high temperatures and frequent droughts. However, a new innovative greenhouse, which collects dew and then uses it for irrigation, makes it possible to grow crops even in the hottest and driest parts of the world. It was designed by Roots Up, a non-profit organization based in Northern Ethiopia, which aspires to help Ethiopian farmers in cultivating crops in the unfavorable climatic conditions of the region. It is worth mentioning that the Root Up greenhouse is a low-tech project, as it is built with the use of basic materials that can be easily found in the area, such as bamboo and ropes, and the construction itself is quite simple and does not require any special skills or tools. How does the Roots Up greenhouse work? In essence, it traps the humidity from the air during the day and converts it into the water in the evening through the process of condensation.

Spiraling Out of Control: The Greatest Spiral Stairs in the World Recently the Loretto Chapel was entered into the Atlas. The Santa Fe chapel is known for a very cool looking set of spiral stairs built in 1877 by a mysterious stranger. With no central support the stairs are said by the sisters of Loretto Chapel to be miraculous in construction. While there are those who beg to differ about the miraculousness of the stairs, no can deny that the stairs look, well, really cool! The miraculous staircase at Loretto Chapel (photograph by Michael Martin) In the past I have admitted a somewhat obsessive love of libraries, and looking at the Loretto stairs, made me realize I have a bit of a thing for spiral staircases as well. So without further ado, the Atlas Obscura presents to you the most intriguing, fantastical, dizzying spiral staircases from around the world. The spiral staircase at the Vatican Museums (photograph by Dimitry B.) The Vatican Museums spiral staircase is one of the most photographed in the world, and certainty one of the most beautiful.

Urbanized Landscape Series by Li Han / Atelier 11 | China Inspired by the unprecedentedly rapid urbanization process undergoing in China, Beijing-based Chinese architect and artist Li Han of Atelier 11 | China has developed a series of drawings on the subject of urban landscapes. The purpose of the series is to record the phenomena Li found interesting and representative in this urbanization process. With techniques and visual languages borrowed from architectural drawings, Li tries to present the spontaneous interaction between the urban environment and human activities. The drawings are not only objective documentations, but also reflections and scenarios on the future development based on the current facts. More images and architects’ description after the break. Xi Zhi Men Xi Zhi Men metro station is an interchange station for two metro lines in Beijing, which has the longest transfer distance in the Beijing metro system. Xi Ba He Xi Ba He depicts a typical Beijing-style residential community built in the 1990s. San Li Tun

8 homes that generate more energy than they consume | Inhabitat - Green Design, Innovation, Architecture, Green Building Your future home could make electric bills a thing of the past, and even help you earn money in the process. Plus-energy homes are popping up around the world, generating more energy than they use, and can even be set up to sell excess energy back to the grid. Beautiful, energy efficient, and increasingly affordable, these dwellings are proving the viability of renewable energy over fossil fuel sources. We’ve rounded up eight plus-energy homes that can produce more energy than they need, with some so powerful that they can even light up the house next door. Dramatically tilted toward the southeast, Snøhetta’s ZEB Pilot House is a plus-energy family house that produces enough surplus energy to power an electric car year-round. Heralded as Australia’s “first carbon-positive prefab home,” the Carbon Positive House is a solar panel-topped house that produces more energy than it consumes. Plus energy architecture isn’t limited to freestanding homes.

Neil M. Denari Architects 30 Eco-Chic Houses Made of 10 Types of Recycled Materials Waste materials that are reclaimed for new structures can be as simple as a bunch of stacked tires or a boat that’s no longer seaworthy, or as complex as old stone bricks re-sculpted to look like new. They can be roughly cobbled together into rustic cabins, or masterfully incorporated into stunning modern residences along with new materials. Sometimes they’re left as-is, their signs of age providing a sense of history, and sometimes they’re processed into something that leaves no hint of their origins. These 10 recycled building materials were saved from the landfill and transformed into the following 30 green homes, and many more around the world as like-new materials Bottles & Cans (images via: treehugger, inhabitat, green upgrader, beercanhouse.org) To some, they’re junk, but to others, discarded bottles and cans can be the main materials of a recycled home. Ships & Boats (images via: strangebuildings.com, sea-fever.org, mr38) Glass Panels & Windows Barns Shipping Containers Grain Bins Tires

DIY Used Cargo Homes & Shipping Container House Plans Designs & Ideas on Dornob.url Once upon a time, you had to buy passage on a freight ship headed out to sea in order to see a stack of containers piled high to the sky all around you. Nowadays more and more architects and builders are finding used free or for sale cargo containers at discount prices to construct all kinds of houses, homes and office structures. However, lest you think you need to go the route of hiring a professional, you should know that some do-it-yourself designers like Keith Dewey are making do with their own shipping container home plans. His own home, for example is constructed out of eight used shipping containers stacked on a residential lot. The above sequence of shipping container housing structures sits somewhere in the middle. At the more conventional end of the container home design spectrum is this modern-style house that combines concrete, stone, glass, metal and a set of multicolored shipping containers at its core.

Rural Studio is an undergraduate program of the School of Architecture,
Planning and Landscape Architecture at Auburn University.
We have been in Hale County since 1993, where we hope we have been a good neighbor and friend to the community. by creationalvehicles Jun 29