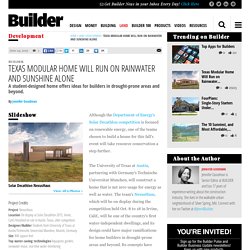 The University of Texas at Austin, partnering with Germany's Technische Universitat Munchen, will construct a home that is net zero usage for energy as well as water. The team's NexusHaus, which will be on display during the competition held Oct. 8 to 18 in Irvine, Calif., will be one of the country's first water-independent dwellings, and its design could have major ramifications for home builders in drought-prone areas and beyond.

Its concepts have takeaways for builders across the country as more jurisdictions allow measures such as potable rainwater reuse and graywater recycling. Because of the looming water crisis, the first step for the 70-plus-member team was to ensure that water in the home be used as efficiently as possible, with a goal of 25 gallons per person per day. Japanese students design home heated and cooled by fermenting straw. We know that composting is good for our gardens, but what about heating our homes? 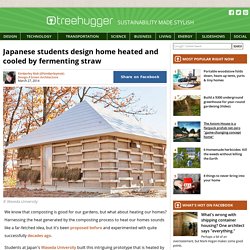 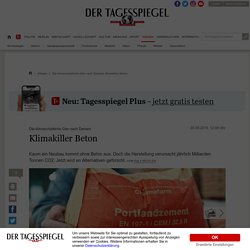 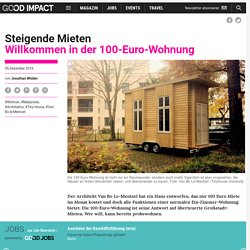 Urban Biofilter. Urban Bioﬁlter designs, implements, and advocates for the integration of biological systems into our existing urban infrastructure. 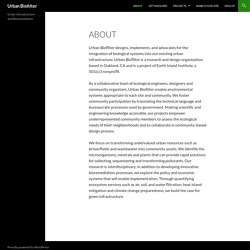 Urban Bioﬁlter is a research and design organization based in Oakland, CA and is a project of Earth Island Institute, a 501(c)3 nonproﬁt. As a collaborative team of ecological engineers, designers and community organizers, Urban Biofilter creates environmental systems appropriate to each site and community. We foster community participation by translating the technical language and bureaucratic processes used by government.

Making scientific and engineering knowledge accessible, our projects empower underrepresented community members to assess the ecological needs of their neighborhoods and to collaborate in community-based design process.

Big but beautiful. Ownworld. Bausatz für das autarke Heim. Energy and water systems. Made in Italy. A-frame homes. Sustainable Communities. Masdar City. Low-impact development (UK) Low impact development (LID) has been defined as "development which through its low negative environmental impact either enhances or does not significantly diminish environmental quality".[1][2][3] The interplay between would-be developers and the UK planning authorities since the 1980s has led to a diversity of unique, locally adapted developments, often making use of natural, local and reclaimed materials in delivering highly affordable, low or zero carbon housing. 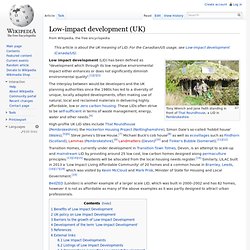 These LIDs often strive to be self-sufficient in terms of waste management, energy, water and other needs.[4] BedZED (London) is another example of a larger scale LID, which was built in 2000–2002 and has 82 homes, however it is not as affordable as many of the above examples as it was partly designed to attract urban professionals. Substantial research has concluded that LID represents some of the most innovative and sustainable development in the UK.[20][21][22] The residents of Tir Penrhos Isaf consider: 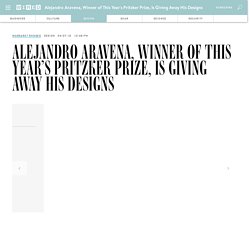 This week, the Chilean architect announced that his studio, Elemental, will open-source four of its affordable housing designs. The projects can be downloaded, for free, from Elemental’s website (here). Aravena delivered the news at a press conference held at the United Nations Headquarters in New York City. That a Pritzker Prize winner would give away his ideas for free is unusual; typically, the title of Pritzker Laureate enables architects to seek out bigger, grander commissions.

Our Permaculture Life: Our affordable debt-free eco-house. We designed and built our house and have no mortgage. 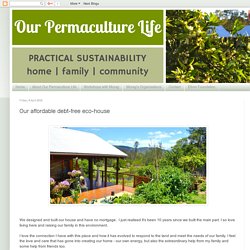 I just realised it's been 10 years since we built the main part. I so love living here and raising our family in this environment. I love the connection I have with this place and how it has evolved to respond to the land and meet the needs of our family. ABC OF INCREMENTAL HOUSING « Elemental. Out of the 3 billion people living in cities today, 1 billion is under the line of poverty. 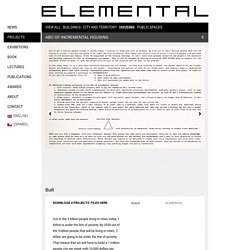 By 2030 out of the 5 billion people that will be living in cities, 2 billion are going to be under the line of poverty. That means that we will have to build a 1 million people city per week with 10,000 dollars per family. Given the magnitude of the housing shortage, we won’t solve this problem unless we add people’s own resources and building capacity to that of governments and market. 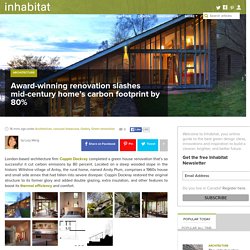 Located on a steep wooded slope in the historic Wiltshire village of Antsy, the rural home, named Ansty Plum, comprises a 1960s house and small side annex that had fallen into severe disrepair. Coppin Dockray restored the original structure to its former glory and added double glazing, extra insulation, and other features to boost its thermal efficiency and comfort. Topped with a distinctive sloped roof that mimics the steep terrain, Ansty Plum was originally designed by David Levitt in 1964 for former Arup partner and engineer Roger Rigby. The property also includes a studio annex later designed by Brutalist architects Peter and Alison Smithson.

Inhabitat - Green Design, Innovation, Architecture, Green Building. Your future home could make electric bills a thing of the past, and even help you earn money in the process. Plus-energy homes are popping up around the world, generating more energy than they use, and can even be set up to sell excess energy back to the grid. Beautiful, energy efficient, and increasingly affordable, these dwellings are proving the viability of renewable energy over fossil fuel sources.

We’ve rounded up eight plus-energy homes that can produce more energy than they need, with some so powerful that they can even light up the house next door. ROXBURY E+ — ISA. Sustainable Homes - Eco Friendly Homes - Healthy Living. Carbon Positive The Carbon Positive House (CPH) has been created to free us of modern day lifelines and make significant contributions within society. Developed and created through innovative design sensitivities and new technologies. The CPH has moved beyond carbon zero by making additional ‘positive’ contributions by producing more energy on-site than the building requires. A revolutionary step forward in Australian Architecture and Construction. In-ground Cool Tubes: to help with cooling Sliding Edible Garden Walls: to block sun penetration Green Roof: for added thermal insulation The Buffer Zone: "The lungs of the house" & "Food Basket" Healthy Materials: High grade sustainable materials, formaldehyde and VOC free.

Ein attraktives nachhaltiges Erdhaus mit zukunftsfähigem Baukonzept. Posted On Tuesday, 05 Mar 2013 By ddobreva+. Exploring The World Of Green Roofs And Underground Homes. This amazing zero energy Bangladeshi air cooler is made from plastic bottles and uses no electricity. Summer is upon us, and complaints about the heat will soon be common in many places. But few places will reach the scorching temperatures residents of Bangladesh will experience, and air conditioning is simply not an option for most people living in rural areas. Ashis Paul developed a clever DIY cooling system that doesn’t need any electricity and is built from a common waste item: empty plastic soda bottles. In just three months, Paul’s company has helped install its smart powerless air conditioners, called Eco Coolers, in 25,000 households, with many more still ahead. The Eco Cooler is reportedly the world’s first-ever ‘zero electricity’ air conditioner, and its inventor wanted to get the concept out there to help as many people as possible.

The Grey Group stepped in to help, using its position as a multinational advertising firm to put the plans online, at no cost, so that anyone can build their own Eco Cooler system. BeCool HVAC system generates clean energy while keeping your house cool. Most air conditioning units are energy hogs that can send an electric bill sky high, often leading people to limit their use. A new device called BeCool cools (or heats) the air while charging up a fuel cell at the same time, could transform the whole approach to indoor climate control by generating electricity rather than just sucking it up.

The invention comes from Be Power Tech, a startup based in Florida, where air conditioning is not just a luxury, but also a lifesaver. Instead of plugging into the grid for its power source, Be Power Tech’s BeCool commercial HVAC unit runs on natural gas. How To Build A Window Box Solar Heater That Gives “Free Heat” All Winter & Doubles As A Solar Oven… This family lives in a sustainable and edible green-house home of the future. A professor the University of Rotterdam’s Sustainable Building Technology program recently offered an opportunity to Netherland families to participate in a groundbreaking project that would span three years and completely uproot the participating family by relocating them in an experimental greenhouse dwelling.

Not everyone would jump at the proposal, but for Helly Scholten, a “botanical stylist” and her family, the project was a chance to dip their toes into a lifestyle she had long fantasized about—sustainable, functionally off-grid and far from mundane. Scholten applied right away and secured her family’s new home for the next three years, adorned with walls of glass and a roof layered in flora and growing produce. They officially moved into the greenhouse in June of 2015 and haven’t looked back. The home can also be a massive responsibility in terms of maintenance. See more here: instagram.com & hellyscholten.com. Leben im Gewächshaus. Ein Zuhause für Aussteiger - Utopia.de. Das Haus im Haus. Spiegel TV zu Besuch im Glashaus. Wohnen im Gewächshaus.