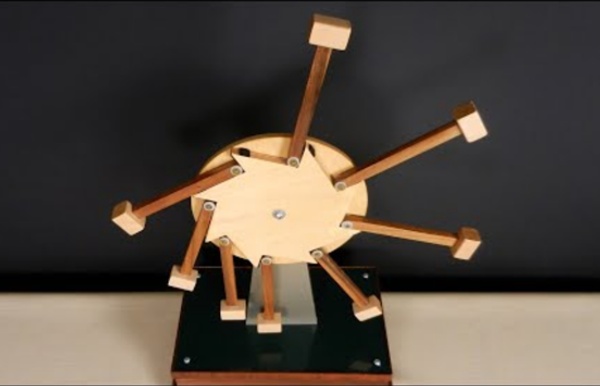 Hydropower from Reuse Reused: a small stepper motor as found in a printer 2 discarded CD-ROMs a foam tray some long stick (I used a piece of 20mm diameter PVC tube from demolition) a LED one or two tie-wraps a small piece of scrap paper Non-reused: The only non-reused part is the hot melt glue (I recommend the low temp type, especially when working with kids). Tools: scissors, screwdriver to disassemble the printer (not shown), cutting pliers or desoldering tools for (optional, not shown). How to make batteries out of paint This article was taken from the January 2013 issue of Wired magazine. Be the first to read Wired's articles in print before they're posted online, and get your hands on loads of additional content by subscribing online. Researchers at Rice University, Houston, have created a battery made of paint. "We've airbrushed it on to tiles, polymers, glass and steel," says grad student Neelam Singh. Here's how to harness the power of art.

Only Organics Can Feed the Hungry World: Here's Why Students working on UGA's organic demonstration farm in summer 2012. (Photo: UGA College of Ag)A new approach to agriculture that combines the best in industrial production with organic and sustainable practices is the key to meeting the changing needs of a changing world, where resources are rapidly depleted by a growing population. "Are Organic Foods Safer or Healthier Than Conventional Alternatives?" is the title of a controversial report released last week by Stanford University's Center For Health Policy. The study concludes that there is "little evidence of health benefit" from eating organic food."

…7 POINTS AGENDA ON GREEN ECONOMY FOR SUSTAINABLE DEVELOPMENT Nigeria has been largely unfortunate not to have good and progressive political leaders, and this has resulted in perpetuating Nigeria in poverty and underdevelopment despite her huge GREEN ECONOMY. This persistent failure of the Nigeria System has produced a large army of bitter critics, who consistently point out the ills in the Governance of Nigeria and potter alternative ways of doing it better. Toward the Sustainable Development Conference [RIO+20] in Brazil. My 7 point agenda on green economy for sustainable development which I recommend for the President to look into will be:

The Most Incredible 3-D Printed Things We’ve Ever Seen ⚙ Co The levees have broken for 3-D printing, and the resulting deluge of printing-concepts-on-the-cheap is flowing faster than we can gather. The best of these rise to the surface for their innovating predictions of a faster/safer/healthier future. A Robotic Hand That Doesn’t Cost An Arm And A Leg Teen engineer Easton LaChappelle created his first robotic hand out of Legos, fishing wire, and surgical tubing--a feat that earned him 3rd place at the Colorado Science Fair. More importantly, it introduced him to a young girl who was born without an arm and needs new prostheses as she grows, which cost a hefty $80,000 per arm. Real Animals That You Didn't Know Existed Maned Wolf The world we live in is filled with exotic wildlife, and that means more than just lions and giraffes. There are a multitude of species that are lesser known to the general public and fascinating to learn more about. Redditor preggit decided to introduce a whole batch of these real animals that look like they've been Photoshopped.

Evergreen CIA Owned Airline: Dropping Poison On You And Your Family [Besides this outfit, it is reported that chemtrail planes also fly out of US and other NATO military bases in the US and around the world.] Evergreen Air is a CIA front company for chemtrail operations within the US, based out of Marana Air Park near Tucson Arizona and McMinville Oregon, near Portland. A major missing piece of a grand conspiracy has been targeted by a drunk pilot. In a small town 30 miles east of the Pacific Ocean in Oregon is the center of a major global operation. At a bar in McMinnville, Oregon, an inebriated pilot attempted to impress one of the pretty ladies with tales of his secret mission.

Military Behind 4 Different Chemtrail Programs by Mike Blair 21 June 2001 from Rense Website Just what exactly are those mysterious airplane vapor trails seen filling America's (and Canada's) skies? A group of independent investigators may have the answer. In a series of high-tech programs that would enthrall the most dedicated science fiction fans, the military is producing what have become known as "chemtrails" - the thick, viscous airplane engine trails that have been poisoning the air and ground with toxic chemicals. Aspartame is, by far, the most dangerous substance on the market that is added to foods. Aspartame is the technical name for the brand names NutraSweet, Equal, Spoonful, and Equal-Measure. It was discovered by accident in 1965 when James Schlatter, a chemist of G.D. Searle Company, was testing an anti-ulcer drug. Aspartame was approved for dry goods in 1981 and for carbonated beverages in 1983. It was originally approved for dry goods on July 26, 1974, but objections filed by neuroscience researcher Dr. John W.

Huge Yields Bubbleponics Cannabis Guide Growing cannabis with bubbleponics was originally pioneered by a grower by the name of Roseman. Growing your marijuana buds When we were first learning about how to grow cannabis with bubbleponics, we had to read through hundred of forum posts by Roseman to get started. However, after reading all of Roseman's information, and after going through a few cannabis grows using bubbleponics, we believe we have discovered the easiest and best techniques to ensure a successful cannabis grow with great yields.

Sea Cucumber Found to Kill 95% of Cancer Cells, Shrink Tumors Sea cucumber has been used in traditional Chinese medicine for hundreds of years, but they are relatively obscure in the U.S. This may be soon changing, however, as evidence mounts that sea cucumber extracts can kill cancer cells while stimulating the immune system. As reported by Ethan Evers, author of “The Eden Prescription, previous research on sea cucumber has demonstrated its ability to kill lung, breast, prostate, skin, colon, pancreatic, and liver cancer cells. These extracts have also proven effective in killing leukemia and gioblastoma cells. Looks like we can add yet another food to the list of anti-cancer foods.

Soursop Fruit Kills Cancer 100-Fold better Than Chemotherapy © preventdisease.comThe fruit's extracts from Annona muricata tree selectively inhibit the growth of human breast cancer cells. The Soursop is a flowering, evergreen tree native to tropical regions of the world. It also contains a long, prickly green fruit which may be effective against some forms of cancer. Annona muricata is an active principle in an herbal remedy marketed under the brand name Triamazon. According to Cancer Research UK, "in laboratory studies, graviola extracts can kill some types of liver and breast cancer cells that are resistant to particular chemotherapy drugs.

Foods That Prevent Cancer The short answer to this question is -- drum roll, please -- yes. They really do. While studies are ongoing, and in many cases experts still don't know exactly how these superfoods work, there's strong evidence that certain fruits and vegetables rich in plant-based nutrients can both prevent tumors from starting and halt their growth. Here, the top foods to work into the family diet if you'd like to cut cancer risk or help those with cancer recover. And who wouldn't? The rich, dark colors of blueberries, Brazilian acai berries, raspberries and cranberries come from phytochemicals that protect against numerous types of cancer. Green eco-friendly custom homes and interiors by Solaleya Designer Patrick Marsilli proposes a revolutionary solar structure Passive solar energy: Rotate your house away from the sun in summer to cool down and towards the sun in winter to warm up (on demand or automated rotation system). Optional Integrated solar panels to store energy as well as several possible ecological options for better energy efficiency. Structural strength: Anti-cyclonic