WeWork Founder Hopes Her New School Will Help 5-Year-Olds Pursue Their. Like so many entrepreneurs, Rebekah Neumann’s impetus for her new venture was solving a problem for herself. 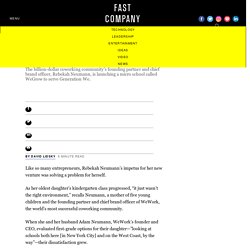 As her oldest daughter’s kindergarten class progressed, “it just wasn’t the right environment,” recalls Neumann, a mother of five young children and the founding partner and chief brand officer of WeWork, the world’s most successful coworking community. When she and her husband Adam Neumann, WeWork’s founder and CEO, evaluated first-grade options for their daughter—”looking at schools both here [in New York City] and on the West Coast, by the way”—their dissatisfaction grew.

“We couldn’t find the school that we felt would nurture growth, her spirit as well as her mind,” Neumann says. “These children come into the world, they are very evolved, they are very special. They’re spiritual. In a world of digital nomads, we will all be made homeless. The office-space empire WeWork was founded eight years ago in New York. 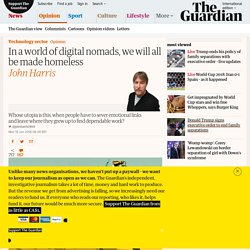 It currently leases 240,000 sq metres of real estate in London alone, which reportedly makes it the city’s largest user of offices after the British government. The basic deal is simple enough: you can either pay to put your laptop wherever there is space, or stump up a little more for a more dependable desk or entire office – and, in either case, take advantage of the fact that, with operations in 20 countries, WeWork offers the chance to traverse the planet and temporarily set up shop in no end of locations. 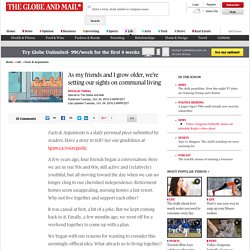 Have a story to tell? See our guidelines at tgam.ca/essayguide. A few years ago, four friends began a conversation: Here we are in our 50s and 60s, still active and (relatively) youthful, but all moving toward the day when we can no longer cling to our cherished independence. Retirement homes seem unappealing, nursing homes a last resort. Why not live together and support each other? Digital nomad problems: NomadList and RemoteOk founder Pieter Levels explains why he has quit the nomadic lifestyle — Quartz. After launching NomadList and RemoteOk, Pieter Levels became something of a common name in the burgeoning digital nomad community. 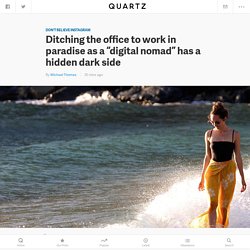 Online he could be seen posting photos from Hong Kong one day, and tweeting from Thailand the next. His blog quickly became a place of inspiration for despairing office workers stuck at their 9 to 5 jobs. But as it turns out, even nomads can get tired of wandering. A couple of weeks ago I was traveling through Berlin when I heard a rumor that Levels had settled down in Amsterdam. Just six months before that, I myself had flamed out as a failed digital nomad suffering from loneliness. Communal Living in Oregon Helps Parents With Child Rearing and Money.

COLTON, Oregon—On 20 acres of land outside Portland, eight adults are rethinking what many Americans would consider a normal family structure. 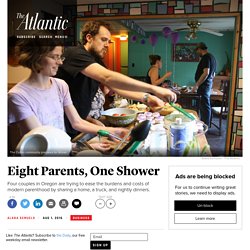 They’re trying to address many of the burdens that come with modern life, including the hours taken up by full-time jobs and the challenges of raising children in a nuclear family. The four couples—two with young children, two with teenagers—share the property, a rambling plot of land with meadows, forests, a brook and an assortment of old rusted-out cars and trailers leftover from the previous property owner.

There’s a main house and two small cabins out back; One of the only rules for the community is that everybody will share the main house’s two bathrooms, one shower and the kitchen. It’s an experiment in community living in which the families help raise each other’s children, pool resources for rent and food, share skills and knowledge, and keep each other sane. There are concrete financial advantages, too. An Exclusive Look At Airbnb's First Foray Into Urban Planning. Two years ago, the founders of Airbnb were asking themselves what the company could become, now that its vision of becoming the world's largest home-share community had come true beyond their wildest expectations. 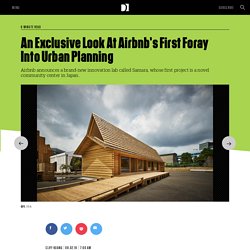 That’s when they happened across a list of the top 10 tech companies of the 1990s. They were stunned—and scared. Nine of those once-hot companies were now floundering or dead, and they had all done everything right. I’ve given up my home to become a digital nomad — Hostfully. In the future we will all be homeless says co-living entrepreneur. Home ownership is set to become a thing of the past, according to the entrepreneur behind London co-living start-up The Collective, because socially liberated millennials are more likely to choose "living as a service". 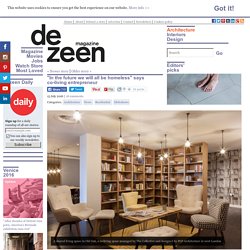 The Collective's chief operating officer James Scott said that the changing housing needs of Generation Y – who are settling down later, if at all – is leading to a future where everyone is "homeless". "In the future we will all be homeless," he said, addressing an audience at the Tech Open Air festival in Berlin yesterday. "Where previously we moved straight from adolescence into adulthood, we now take our time to become more socially liberated and culturally diverse, experimenting to find out what – and who – we love, before committing to it in adulthood.

" Scott said the appetite for this type of property is growing so rapidly that it is likely to become the standard way of living. "The median age of marriage has shifted from 20 to 29 in the past 40 years," he added. Millennials Look to the Suburbs, Not Cities, for First Homes - Curbed. "This stuff is very proven in Europe and Latin America," says the younger Zeppelin. 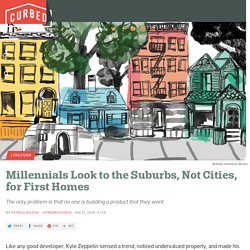 "It’s universal human values. It’s not everybody’s ideal, but some people want a version of urban housing that works for people throughout their lives. We just completed 50 units of family housing, and leased out almost immediately. " The Taxi development, now part of the hip RiNo, or River North Art District, contains a child care center, maker’s studio, and community garden. It could be labeled peak millennial if it wasn’t so successful, so deeply considered, and so not meant for a single demographic. The last time this many American adults lived with their parents it was 1880. In years gone by, when people imagined the 21st Century, they predicted everything from hoverboards to cryogenic freezing and teleportation. 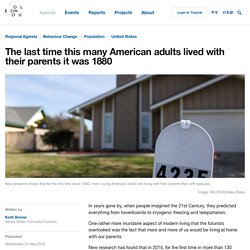 One rather more mundane aspect of modern living that the futurists overlooked was the fact that more and more of us would be living at home with our parents. New research has found that in 2014, for the first time in more than 130 years, young American adults were more likely to be living with their mum and dad than they were to be living with a spouse or partner in their own household.

What do the figures show? New Pew Research Center analysis of census data shows that in 2014, 32% of young adults were still living in their parental home, 31% were living with a spouse or partner in their own household and 14% of young adults were heading up a household in which they lived alone, were a single parent or lived with one or more roommates. 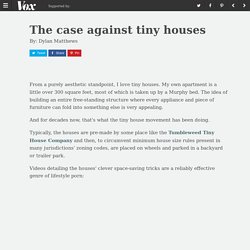 My own apartment is a little over 300 square feet, most of which is taken up by a Murphy bed. The idea of building an entire free-standing structure where every appliance and piece of furniture can fold into something else is very appealing. And for decades now, that's what the tiny house movement has been doing. Typically, the houses are pre-made by some place like the Tumbleweed Tiny House Company and then, to circumvent minimum house size rules present in many jurisdictions' zoning codes, are placed on wheels and parked in a backyard or trailer park. Videos detailing the houses' clever space-saving tricks are a reliably effective genre of lifestyle porn: The End of the Suburbs. A major change is underway in where and how we are choosing to live. In 2011, for the first time in nearly a hundred years, the rate of urban population growth outpaced suburban growth, reversing a trend that held steady for every decade since the invention of the automobile.

In several metropolitan areas, building activity that was once concentrated in the suburban fringe has now shifted to what planners call the “urban core,” while demand for large single-family homes that characterize our modern suburbs is dwindling. This isn’t just a result of the recession. Rather, the housing crisis of recent years has concealed something deeper and more profound happening to what we have come to know as American suburbia. The Evolution of Co-living. The Evolution of Co-living Do you know your neighbours? Are you happy with your living situation? The-future-will-we-all-have-roommates. This weekend, residents will begin moving into New York’s newest experiment in communal living: a blocky red-and-white building in Williamsburg, nestled snugly against the BQE. It’s run by the company Common, which sells “co-living," a relatively new product that’s a start-up version of rental roommate shares.

The Williamsburg building is Common’s third and the largest in the city; there are 51 bedrooms, priced between $2,250 and $3,190 for month-to-month rent. Some of those bedrooms look out on the freeway, but think of them as race-car beds for grown-ups. The glass is remarkably soundproof, and you can pull the blinds if you don’t want the motorists to see your junk.

Fastcompany. Coliving, the latest trend in real estate, is often compared to "dorms for adults. " Instead of isolated apartments, housing projects like WeWork’s WeLive offer tiny, furnished rooms and abnormally generous common spaces. Others, like Brooklyn-based Common, cater to a more mature crowd (sans WeLive's laundry-room arcade) but follow a similar concept: Residents rent furnished rooms inside of larger community complexes, just like many of them did in college. Now a real estate developer is applying the "dorms for adults" model to, well, dorms. High house prices prompt some to buy real estate with friends. When Jeremy Campbell purchased a house in Ladner, B.C., with his sister and her husband in 2010, it was meant to be a temporary arrangement until he could upgrade to a place of his own. "The initial plan was to do this short term just to get into the market, build some equity ... get my foot in the door," says Campbell, who covered one third of the down payment on a 2,000 square-foot home that's split into two suites.

But with home prices in the Lower Mainland's red-hot real estate market soaring, Campbell says they're thinking of staying put. "We'll invest in the house to expand it versus selling and going our separate ways," says Campbell, noting that a renovation is needed to accommodate the growing family, which now includes his fiancee, their new dog and his three-year-old niece. Experts say an increasing number of first-time homebuyers are contemplating arrangements like Campbell's as sky-high prices in markets such as Toronto and Vancouver have eroded affordability. Crime in the community: when 'designer' social housing goes wrong. Divorced Parents, Living Close for the Children’s Sake. A Tiny Home by Choice in New York City. MINI presents shared living spaces as solution to housing crisis.

Is the World Ready for Global Nomads? Google and the Feds Team Up to Build the City of the Future. Itinerary — Remote Year. Roam. Free. Study: A Hatred of Long Commutes Might Explain Why Wealthy Americans Are Returning to City Centers. This House Costs Just $20,000—But It’s Nicer Than Yours. Mayor de Blasio Delivers Remarks at AARP Age-Friendly NYC Livability Solutions Forum. The shift to smaller households over the past century. Reinventing.paris / Competition for innovative urban projects. Teeny house, big lie: Why so many proponents of the tiny-house movement have decided to upsize.

Would you rent out your home as an office workspace? Vivre avec une personne âgée: une coloc’ originale pour les étudiants. New U.S. Homes Make Room for Airbnb Crowd. Is This The House That Will Turn Millennials Into Homeowners? Rise of families with three generations under one roof  Our house, it’s a demographic feat: How multigenerational family living is changing the face of Canadian households. Single parent flat-sharing – a new way to live. Coliving: A Solution for Lonely Millennials? L'habitat participatif, une autre façon de bâtir sa vie.