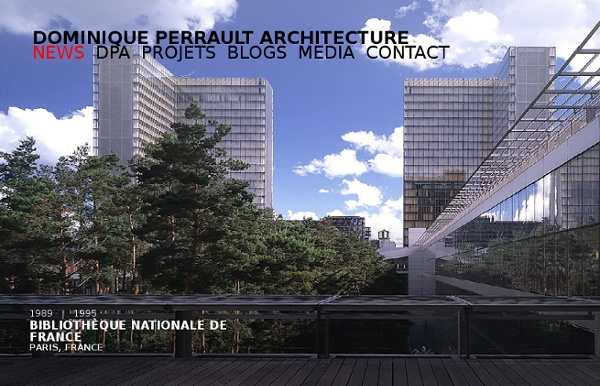 officine TNT ARCHITECTURE - Architecte - paris archdaily Architects: Edouard François Location: Paris, France Project Area: 7,700 sqm Project Year: 2009Photographs: Courtesy of Edouard François Eden Bio was a study of the densification of a typical suburban block on the east side of Paris. Three ideas guided the project. The first idea was to respect the surroundings and its history “à la Doisneau”. The program quickly became clear: to avoid building directly on street alignments, to maintain the disparate suburban alignments, and to respect the alleys as connections that serve the whole complex. The second idea was that of access. The third idea of the project was to allow nature to inhabit the recesses of this “village-like” composition. Finally, to honor the agricultural past of the site, two greenhouses were built. The operation was quickly named Eden Bio.

Renzo Piano Building Workshop - Official Site Agence Search Architecture Brooklyn’s Wythe Hotel: So Authentic It Hurts I’m happy to report that the press release for the Wythe Hotel, a precious new hotel in an old textile factory in Williamsburg, Brooklyn, drops the adjective “authentic” only once. This shows incredible self-restraint on the part of the PR agency (a profession not exactly known for self-restraint): Authenticity is to Brooklyn what sun is to San Diego. It’s practically the civic religion thereabouts. That’s not to suggest that the Wythe is coy about its "authenticity," even if the press release doesn’t beat you over the head with it. Built in 1901, the factory has been converted into a 72-room hotel and restored to a T, its industrial character “beautifully preserved,” with every last pine beam and arched window and cast-iron column shellacked and fetishized. Be warned: All that authenticity will cost you. And not to split hairs here, but how authentic is the Wythe really?