Micro Style. Mountain Refuge is a concept for a tiny cabin that could be built anywhere. Italian architects Massimo Gnocchi and Paolo Danesi designed Mountain Refuge as a prefabricated cabin-style micro-home built from plywood. The duo has founded a startup company to find a partner to make their prefabricated concept a reality. Gnocchi and Danesi designed Mountain Refuge as a contemporary twist on typical cabin typology that would help the occupants find a "connection with nature". "The cabin's concept is inspired by traditional archetypes, evoked through contemporary principles," they said. A steeply sloping roof sits at an exaggerated angle above an exterior wall that is glazed from floor to ceiling, to maximise views over the landscape. Mountain Refuge is modular, so the design could stand alone as one 24-metre-square space, or include an optional second module to add 12 square metres of floor space. 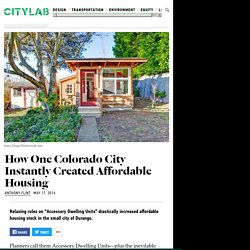 What they mean are the granny flats and in-law apartments sprinkled throughout cities and towns across the land, the finished basements, above-garage studios, rehabbed carriage houses, and other outbuildings on parcels generally zoned for single-family homes. But here’s what they really are: an instant source of affordable housing, if only they could be freed from extensive restrictions that cities and towns have in place that tightly limit who can live there. When I was at the Office for Commonwealth Development under Massachusetts Governor Mitt Romney, we tried to increase the supply of new multi-family housing at smart growth locations, in town centers or by transit stations. Yet it quickly became apparent that there were thousands of existing homes already, in the form of Accessory Dwelling Units. Someone Is Creating Tiny Houses For Fairies And The Media Is Abuzz Trying To Work Out Who It Is.

10 AMAZING SMALL HOMES. Tiny Homes Banned in US at Increasing Rate as Government Criminalizes Off Grid Living. As the corporatocracy tightens its grip on the masses – finding ever more ways to funnel wealth to the top – humanity responds in a number of ways, including the rising popularity of tiny houses. 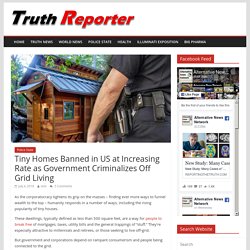 These dwellings, typically defined as less than 500 square feet, are a way for people to break free of mortgages, taxes, utility bills and the general trappings of “stuff.” They’re especially attractive to millennials and retirees, or those seeking to live off-grid. But government and corporations depend on rampant consumerism and people being connected to the grid. Seeking actual freedom through minimalist living should seem like a natural fit for the American dream, but the reality is that many governments around the country either ban tiny homes or force them to be connected to the utility grid. “As of now, few cities allow stand-alone tiny houses. Home - coodo - mobile living. First habitable 3D-printed houses will soon take shape in the Netherlands. In the Netherlands, 3D printing is entering a new stage: by the end of the year, construction will start on a new type of house — a 3D-printed house. 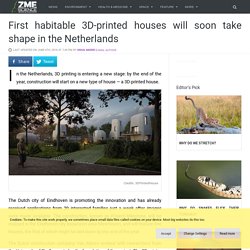 Credits: 3DPrintedHouse. The Dutch city of Eindhoven is promoting the innovation and has already received applications from 20 interested families just a week after images were made available. The construction, known as Project Milestone, will be realized in the Eindhoven city expansion area Meerhoven, and will feature five houses, the first of which might be laid down by the end of the year. Amazing Off-The-Grid Tiny House Has Absolutely Everything! Businessinsider. 30' ESCAPE Traveler XL Tiny Home on Wheels. On October 9, 2015 This is the 30′ ESCAPE Traveler XL tiny home on wheels. 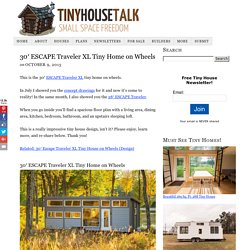 In July I showed you the concept drawings for it and now it’s come to reality! In the same month, I also showed you the 28′ ESCAPE Traveler. When you go inside you’ll find a spacious floor plan with a living area, dining area, kitchen, bedroom, bathroom, and an upstairs sleeping loft. Amazon Now Sells Prefabricated Tiny Houses. MODS International Pre-Fabricated Tiny Home - $36,000 (plus $3,755 shipping) The structure weighs 7,500 pounds, so it’s a good thing you don’t have to lug it home on top of your minivan. 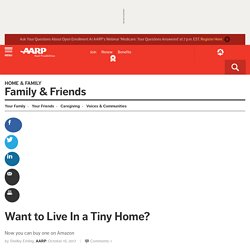 Locating Land for Tiny Houses. Oh boy Michael, I think this is a big can of worms. 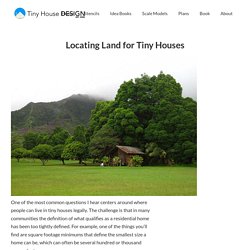 Pardon, in advance, the long post that I feel is coming. I am familiar with Oregon Building Codes (based off of IRC) and many of the greater Portland area municipalities’ zoning codes. I write from this perspective. States that have building codes truly are protecting folks. Where Can You Park A Tiny House? - MiniMotives. This is probably the most common question I get, “Where can you park a tiny house?”. 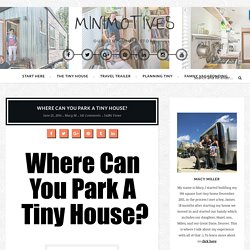 I have no idea why I haven’t just done a post on this, I’ve answered it individually at least 300 times… So, here is the answer: Brilliant Yurt Design! - Mixing Tradition with Super Modern Construction. Elsa – Tiny House Swoon. Brevard Tiny House. An 8×24 ft. tiny home featuring a loft walkway, floor storage, and a large bathroom. 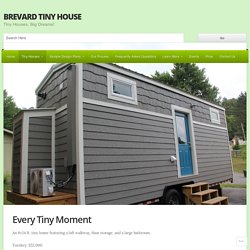 Turnkey: $52,000. Looking towards the master loft and the living area underneath, which will feature a couch with the TV under the stairs. There is also storage underneath the stars. Another views towards the master loft and living area. Woman lives full-time in tiny teardrop. Peek inside to see how functional it is. When Sharon retired after a career as a pharmacist, she decided to take her life in a whole new direction. 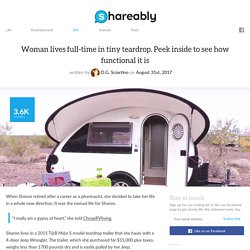 It was the nomad life for Sharon. How-tiny-homes-could-spur-affordable-housing click 2x. Craftsman tiny house by Zyl Vardos.Photo Credit: Abel Zyl/Shuttertstock Late last year, the tiny house community celebrated a watershed moment—an official appendix in the 2018 version of the International Residential Code, the model building code used by most jurisdictions in the United States. 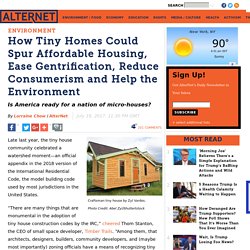 “There are many things that are monumental in the adoption of tiny house construction codes by the IRC,” cheered Thom Stanton, the CEO of small space developer, Timber Trails. “Among them, that architects, designers, builders, community developers, and (maybe most importantly) zoning officials have a means of recognizing tiny houses as an official form of permissible dwelling.” Fully-Customizable Tiny Homes Start at an Affordable $22,000. The tiny homes trend is still on the rise, as an increasing number of both city and country dwellers learn to live with less and maximize their small spaces.

Although the cost of these abodes can be expensive, California-based Monarch Tiny Homes believes that this lifestyle shouldn't demand a fortune to acquire. Their beautifully-minimalist buildings offer mobility and the comforts of a larger home, all without breaking the bank. The portable, trailer-led getaways cost just $22,000 for their Half/Half model and $47,000 for the Twenty-Footer version (20′ x 8.5′). Tiny Homes for Seniors is the Newest Trend in Mobile Living. Forget assisted living or RVs, more and more seniors are looking at tiny homes to spend their retirement. In fact, a 2015 survey found that 30% of tiny home residents were between 51 and 70 years old, making senior citizens a huge part of the tiny home movement.

As result, more companies are specializing in small residences equipped with comforts specially designed for this unique demographic. These elderly Japanese women will make you question everything you thought you knew about retirement homes. Check out this incredible multi-home teepee structure called “Jikka” designed by Tokyo-based architect Issei Suma. It’s in a rural, mountainous region of Japan known as Shizuoka Prefecture. It was designed to house a pair of elderly ladies whose idea of ‘retirement home’ is far from traditional. They live on site with their caretakers, sharing the living space, work space and kitchen, all arranged in a square formation. In the center of the complex, there’s a spiral-shaped pool which is easily accessible for wheelchair users. These ladies make the retirement years look really good. H/T: So bad so good. Wikkelhouse - A HOUSE FOR YOU. 7705. mobile homes. Where Can You Park A Tiny House? - MiniMotives.

Home - Rich's Portable Cabins & Tiny Homes. The Q Cabin Kit Process - The Q Cabin Kits. Owning a new home can be exciting and overwhelming. Design Horizons aims to ramp up the excitement and remove the obstacles and uncertainty around new home construction. In addition to a superior architectural shell, Design Horizons provides an essential service for the success of your project: a complete set of permit documents. Documents are included with every cabin kit and are amended to reflect your individual design and site parameters. The set includes all architectural and engineering details for the construction of your customized Q Cabin Kit.

We include coordination with other agencies and engineers to insure that your permit package will be complete and be successfully awarded a permit for construction. Small Homes – Living Off The Grid. 7 Prefab Eco-Houses You Can Order Today. Ever since the early days of the 20th century, when Americans started buying kit bungalows and farmhouses from the Sears Roebuck catalog, the lure of instant housing has been huge.

Vipp Shelter tiny prefab as precise industrial-era appliance. Resource Furniture: Italian-Designed Space Saving Furniture. 96 Sq. Foot Finnish Micro-Cabin Built Small To Forego Permits. Tiny Wind & Solar Powered Home Lets You Live Off The Grid Anywhere In The World. Small and efficient homes, whether in the city, out in the country or even on the road, are becoming more and more popular. Hawaii Will Turn Old City Buses Into Mobile Homeless Shelters With Showers. Old city buses in Hawaii are going to be converted into homeless shelters if architecture firm Group 70 International is successful.

The vehicles are to operate in fleets, with different units dedicated to different purposes, from living spaces to recreation rooms. Show Full Text May Ry Kim of Group 70 International told Hawaii News that the design “is based on the premise that you could walk in to a hardware store, buy everything you need in one go and build everything with no trade skills,” so that it can be built by a team of untrained volunteers.

Small Homes & Tiny Houses. Sell Your Crap, Pay Off Your Debt, And Do What You Love! This Makes It All Possible! 11 Tiny House Villages Redefining Home. Above: Boneyard Studios in Washington, D.C. Please share with Shareable! Austin to Shelter Homeless in a Tiny House Village.