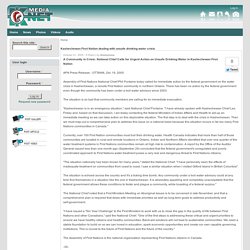 There has been no action by the federal government even though the community has been under a boil water advisory since 2003. The situation is so bad that community members are calling for an immediate evacuation. "Kashechewan is in an emergency situation," said National Chief Fontaine. Currently, over 100 First Nation communities must boil their drinking water. "The situation nationally has been known for many years," stated the National Chief. The situation is echoed across the country and it's a ticking time bomb. The Assembly of First Nations is the national organization representing First Nations citizens in Canada. Dr. Dr. Dr. CBC News In Depth: Aboriginal Canadians. Attawapiskat's housing crisis: A ground-level perspective - Aboriginal - CBC. This story was produced with guidance from Danny Kresnyak of Journalists for Human Rights, as part of JHR’s Northern Ontario Initiative. 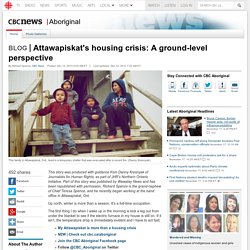 Part of this story was published by Wawatay News and has been republished with permission. Richard Spence is the grand-nephew of Chief Teresa Spence, and he recently began working at the band office in Attawapiskat, Ont. Up north, winter is more than a season. It’s a full-time occupation. The first thing I do when I wake up in the morning is kick a leg out from under the blanket to see if the electric furnace in my house is still on. Next I check on my pregnant girlfriend and our three children. Richard Spence stands in the burnt-out emergency shelter on the Attawapiskat First Nation. Then I need to track down wood, propane or any other temporary fuel source not requiring a plug-in. I put on two pairs of heavy socks and thermal underwear with my jeans over top. Now the people are gone, but the trailers remain. First Nations Crisis. HOUSING CRISIS IN ATTAWAPISKAT. TO: All First Nations Chiefs within Ontario FROM: Regional Chief Angus Toulouse DATE: December 1, 2011 RE: HOUSING CRISIS AT ATTAWAPISKAT The Attawapiskat First Nation declared a state of emergency on October 28, 2011. 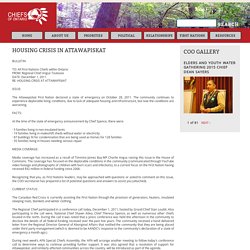 The community continues to experience deplorable living conditions, due to lack of adequate housing and infrastructure, but now the conditions are worsening. At the time of the state of emergency announcement by Chief Spence, there were: · 5 families living in non-insulated tents · 19 families living in makeshift sheds without water or electricity · 87 buildings fit for condemnation that are being used as homes for 128 families · 35 families living in houses needing serious repair Media coverage has increased as a result of Timmins-James Bay MP Charlie Angus raising this issue in the House of Commons.

The Canadian Red Cross is currently assisting the First Nation through the provision of generators, heaters, insulated sleeping mats, blankets and winter clothing. 1. ATTAWAPISKAT HOUSING-CRISIS. Still Waiting in Attawapiskat: Will Canada Fail the Next Generation of First Nations Students? Housing crisis in Attawapiskat still isn’t solved. When people in a Northern Ontario community were living in tents and overcrowded shacks without running water or proper heating they could have used a housing expert or maybe a builder with a load of quality supplies. 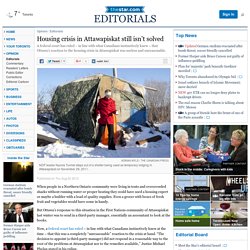 Even a grocer with boxes of fresh fruit and vegetables would have come in handy. But Ottawa’s response to this situation in the First Nations community of Attawapiskat last winter was to send in a third-party manager, essentially an accountant to look at the books. Now, a federal court has ruled – in line with what Canadians instinctively knew at the time – that this was a completely “unreasonable” reaction to the crisis at hand. “The decision to appoint (a third-party manager) did not respond in a reasonable way to the root of the problems at Attawapiskat nor to the remedies available,” Justice Michael Phelan stated in his ruling.

The root causes of the crisis were not hard to pinpoint: too many people, in too few homes and not enough money to do anything about it.