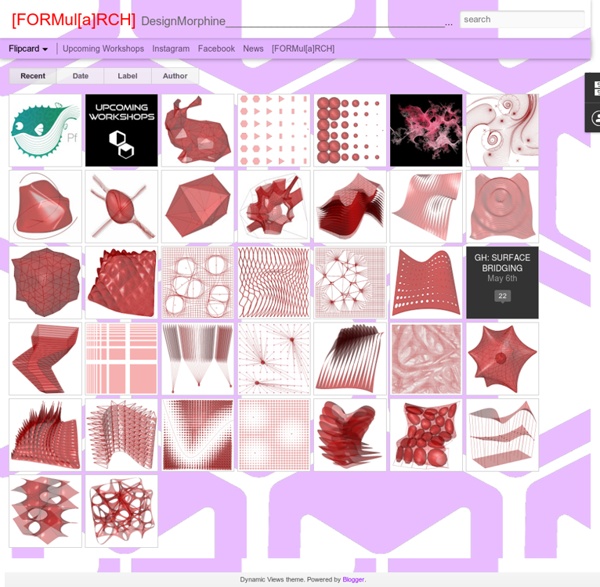 Grasshopper : Parametric Space Lecture: World Space & Parametric Space; Curve & Surface Evaluation; Re-parametrization Training: 2D Grids; Point Decomposition; Numbers Remapping; Numbers Formatting; 3D Poly-lines Workshop: Structural Building Skin Based on a Polygonal Grid Grasshopper Modules - Proxy Wiki From Phylogenesis, FOA 2003 The following Grasshopper modules were created in consultation with FOA's Phylogenesis, in particular the taxonomy of forms found at the conclusion of the book. Grasshopper is an exciting and evolving modeling platform - the following examples attempt to develop a range of geometric examples to explore its form-making potentials. Andrew Payne, a GSAPP alum, has created a comprehensive primer on Grasshopper that can be found here. You should have this handy for reference.

Inorganic Speciation Inorganic Speciation by Iain Maxwell + Dave Pigram (supermanoueuvre) Form is the primary instrument through which architecture engages with the world. It is this firmly held position that motivates supermanoeuvre to develop custom methodologies of formation that allow for the explicit and open-ended negotiation between multiple architectural intentions and the complex milieux within which they will operate. These methodologies are algorithmic in nature, primarily digitally enacted, and extend the capacities of the form-finding tradition within architecture through a decoupling of its processes from the limits of physics, enabling a broader examination of the number and nature of negotiable inputs.

Geometry, Surfaces, Curves, Polyhedra Notes on polygons and meshes Includes Surface (polygon) simplification, Clipping a polygonal facet with an arbitrary plane, Surface Relaxation and Smoothing of polygonal data, Mesh crumpling, splitting polygons, two sided facets, polygon types, tests for clockwise and concavity, clipping line to polygons, area of a 3D polygon, area of general polygons, determining inside/outside test, intersection of a line and a facet, Eulers numbers. No amount of genius can overcome a preoccupation with detail. Law 8, Marion Levy Jr. Notes on points, lines and planes Includes calculations for the distance between points, lines and planes. The intersection between 2 lines in 2D and 3D, the intersection of a line with a plane.

Emergent Phenomena in Nature Nature offers many familiar examples of emergence, and the Internet is creating more. The following examples of emergent systems in nature illustrate the kinds of feedback between individual elements of natural systems that give rise to surprising ordered behavior. They also illustrate a clear trade off between the number of elements involved in the emergent system and the complexity of their individual interactions. The more complex the interactions between elements, the fewer elements are needed for a higher-level phenomenon to emerge. Hurricanes and sand dunes form from vast numbers of very simple elements whereas even small groups of birds can exhibit flocking behavior.

RHINO: GRASSHOPPER DEFINITIONS - RHINO / GH This definition was developed for my final thesis project to generate a louver system based on functional requirements within the building. The performance was then tested in Ecotect. A large part of my thesis design involved invertible arena seating with many moving parts. I used Grasshopper as a means to develop the seating testing clearances, site lines, and many other variables. This definition looks at taking any curved surface, and generating weaving geometry across it. The parametric skyscraper uses Grasshopper to generate the entire structure.

Floraform – an exploration of differential growth Introducing Floraform, the latest generative design system from Nervous System. Floraform is inspired by the biomechanics of growing leaves and blooming flowers and explores the development of surfaces through differential growth. We used this system to computationally craft a new 3D-printed jewelry collection, now available on our website. Floraform is a simulation of a differentially growing elastic surface that we created to explore how biological systems create form by varying growth rates through space and time. It began with an unusual flower, Celosia cristata, and led us through a journey of cellular differentiation, discrete differential geometry, kleptoplastic sea slugs, nastic movements, and 19th century zoetropes. The result is a series of 3D-printed sculptures and jewelry generated through a computational process of differential growth.

Emergence Emerges How to self-organize without requiring a blowhard. Emergence is a phenomenon, or more properly one of several phenomena, that is still debated. It is something that results from a collection of smaller units, that cannot be predicted from observation of the smaller units. Like the conical shape of a pile of sand, for example. from observing grains of sand, one wouldn’t be able to predict the regular conical form that it assumes when piled, and when that pile increases. Tutorials Introduction to Grasshopper Videos by David Rutten. Wondering how to get started with Grasshopper? Look no further. Spend an some time with the creator of Grasshopper, David Rutten, to learn the fundamental of Grasshopper.