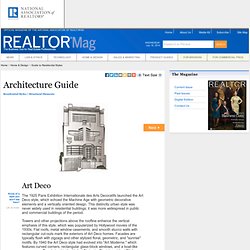 This distinctly urban style was never widely used in residential buildings; it was more widespread in public and commercial buildings of the period. Towers and other projections above the roofline enhance the vertical emphasis of this style, which was popularized by Hollywood movies of the 1930s. Flat roofs, metal window casements, and smooth stucco walls with rectangular cut-outs mark the exteriors of Art Deco homes. Facades are typically flush with zigzags and other stylized floral, geometric, and "sunrise" motifs. Le concept - Waterfox. Moshe Safdie: Building uniqueness. Yaodong. Coolest underground homes. House designing undoubtedly is a complex element of the building process and when you are talking in context of underground houses, things are bound to get tricky and complicated. 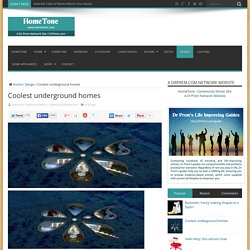 However, there exist few structures beneath the Earth, which have risen against the odds to astonish us with their creative marvel. Nevertheless, these underground houses not only look spectacular but also behold green credentials close to them. Many consider them as a perfect alternative for traditional homes to minimize the negative impact on environment. Ladies and gentlemen, without further ado, we bring to you, the underground wonders to sweep you off your feet.

Hold your breath and scroll down. Gary Neville’s Underground House The first shocker from the list comes from Neville’s kitty. The Cave House This one has really stood tough against the sands of time. Swiss Mountain Underground House In the Swiss village of Vals, this underground house stands apart from the rest. Sedum House. Underground Homes Gazette - Waterfox. MISFITS' ARCHITECTURE - Waterfox. PHASE 1: Cost-effective building performance (more from less) This is an Icelandic turf house. 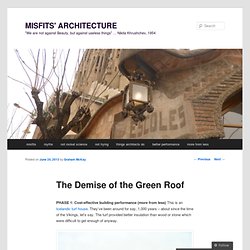 They’ve been around for say, 1,000 years – about since the time of the Vikings, let’s say. The turf provided better insulation than wood or stone which were difficult to get enough of anyway. Technically, I suppose, we’ll have to include dugout buildings and cut-and cover buildings such in these since they do make use of the insulating properties of soil and vegetation. If we do that, we’ll also have to include dwellings such as these yaodong in Northern China. This image is from Bernard Rudofsky’s Architecture Without Architects: A Short Introduction to Non-Pedigreed Architecture and, thanks to Pinterest, is famous once again. 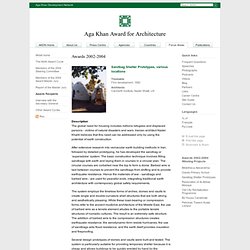 Iranian architect Nader Khalili believes that this need can be addressed only by using the potential of earth construction. After extensive research into vernacular earth building methods in Iran, followed by detailed prototyping, he has developed the sandbag or ‘superadobe’ system. Reacting To Disaster: The Reaction Housing System - The Pop-Up City - Waterfox. Move over shipping containers: modular housing just got stackable! 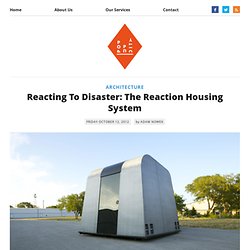 The Reaction Housing System was recently unveiled as a new solution for emergency architecture. The houses are small units referred to as Exos, and are designed to host up to four people each. The simple design manages to incorporate all of the necessary elements for a home: sewage, lighting, water, and climate control, all within a compact space. Emergency Shelters Made From Paper - The Pop-Up City - Waterfox. After working for wealthy costumers year after year Japanese architect Shigeru Ban started to question his contribution to society and decided to give his career another direction with a very different clientele. 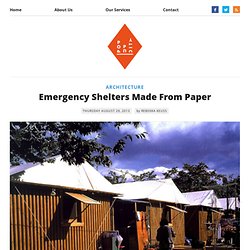 He decided to create and build emergency shelters that help people in need in disaster struck areas with nothing so simple but paper. Being on this noble course since the 1990s he has not lost sight of it ever since. To meet all the requirements an emergency shelter demands is no piece of cake. It needs to be quick-and-easy to build yet durable, safe from all hazards of nature yet cheap enough to stay affordable, a semi-permanent structure yet no burden for its environment, and it needs to be transportable without difficulty even when large quantities are ordered. Shigeru Ban, who considers himself the first architect to seriously work with paper, did not only meet all of the above requirements but has even extended this nearly unattainable list.

IKEA Launches Flat-Pack Modular Refugee Shelter - The Pop-Up City - Waterfox. With plenty of experience in manufacturing prefab design, IKEA has launched a modular refugee shelter that can be set up in only four hours at any place in the world. 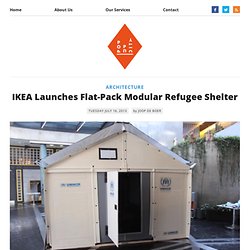 The light-weight construction comprises of a steel frame with insulated light-weight polymer panels and comes flat-packed in a cardboard box, like all IKEA furniture. The panels, pipes, connectors and wires can be assembled pretty easily thanks to a classic IKEA manual. For the project the IKEA Foundation has teamed up with the United Nations Refugee Agency (UNHCR). The idea behind IKEA’s sudden interest in temporary refugee housing is that refugees now live in badly equipped traditional canvas ridge tents or more modern hoop tents. According to the furniture giant, these tents are not insulated and last only for a couple of months when they’re used extensively.

DIY Architecture: First WikiHouses Built - The Pop-Up City - Waterfox. It was one year ago that we brought you news of WikiHouse, the innovative open-source concept for housebuilding from London-based design team 00:/ (zero zero). 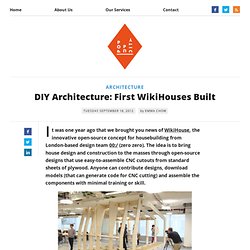 The idea is to bring house design and construction to the masses through open-source designs that use easy-to-assemble CNC cutouts from standard sheets of plywood. Anyone can contribute designs, download models (that can generate code for CNC cutting) and assemble the components with minimal training or skill. We’ve already seen IKEA dabble in urbanism.