The 20 Most Beautiful Bookstores in the World 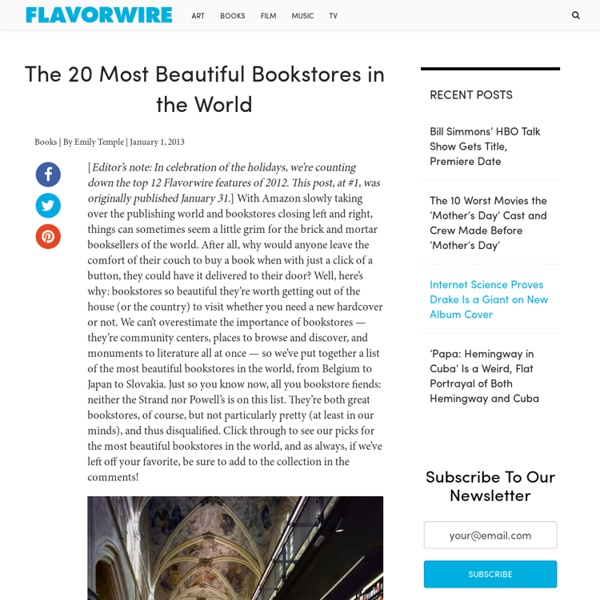 [Editor’s note: In celebration of the holidays, we’re counting down the top 12 Flavorwire features of 2012. This post, at #1, was originally published January 31.] With Amazon slowly taking over the publishing world and bookstores closing left and right, things can sometimes seem a little grim for the brick and mortar booksellers of the world. After all, why would anyone leave the comfort of their couch to buy a book when with just a click of a button, they could have it delivered to their door? Well, here’s why: bookstores so beautiful they’re worth getting out of the house (or the country) to visit whether you need a new hardcover or not. We can’t overestimate the importance of bookstores — they’re community centers, places to browse and discover, and monuments to literature all at once — so we’ve put together a list of the most beautiful bookstores in the world, from Belgium to Japan to Slovakia. A gorgeous converted Dominican church gives the power of reading its due diligence.

It's Time To Use the B(isexual) Word I’ve been involved on the GLBTQ book internet for many years now, and what I’ve enjoyed most about watching it mature over that time is seeing the growing presence of the latter letters of the acronym. I started The Lesbrary (and later Fuck Yeah Lesbian Literature on tumblr) because the “GLBT/LGBT” or “Gay and Lesbian” book blogs I found at the time were almost entirely M/M books, with the occasional F/F content, and no bi or trans stories to be found. Luckily, this has begun to change, and one of the blogs that’s been leading the charge is Bisexual Books on tumblr. Before following Bisexual Books, I had included bi content on my blogs and read bi women books, but I hadn’t been very familiar with bisexual politics, or bisexual books as their own category. I was happy to absorb knowledge about bisexual lit and politics, as well to learn about stereotypes to avoid.

For Those Who Want to Lead, Read - John Coleman by John Coleman | 10:00 AM August 15, 2012 When David Petraeus visited the Harvard Kennedy School in 2009, one of the meetings he requested was with author Doris Kearns Goodwin. Petraeus, who holds a PhD in International Relations from Princeton, is a fan of Team of Rivals and wanted time to speak to the famed historian about her work. Search #d9e8c3 #ced181 #7c8f50 #555e32 15 ways to use vodka Keyboard: S - next A - previous R - random 15 ways to use vodka Share on FB 55920 Below Random Pics A BEAUTIFUL DIY DRESSING ROOM Don’t know what to do with that spare room you got in the house? Forget about the home office, how about turning it into a dressing room! I was over at Elsa’s blog Casa Greer the other day and stumbled upon her post on Domestic Jenny. Apparently, Jenny (who is a renter, can you believe it?) took on a huge DIY project and turned her extra room into a dressing room! Everything is so organized here.

8 Times Tumblr's Wizarding World Was Better Than Pottermore's There’s no need for me to rehash the disaster that was JK Rowling’s recent attempt to describe the international wizarding world of Harry Potter. (NK Jemisin also has a great take on what’s so disappointing about it.) Even before “History of Magic In North America”, her assertion that there are only 11 wizarding schools in the entire world had a lot of fans side-eyeing. Luckily, before and after Pottermore’s weak worldbuilding, Harry Potter fans have been painting much more detailed and respectful portraits of a global wizarding community. They’ve been asking the difficult questions about magic and colonialism: And they’ve been imagining wizarding schools and communities that are as vibrant as the UK’s all over the world:

Mismatched Mismatched chairs around the dining table certainly isn't anything new but it's a design trend I really admire. And with so many chairs available at yard sales for cheap, it's an easy way to add great style and personality to your table without the extra cost... I really like this top grouping of chairs. Most appear to be the same chair but are covered in different vintage fabrics. So after you find your set of chairs at a local thrift store or Habitat for Humanity, put the money towards great fabrics and some upholstery. Or learn to upholster yourself.