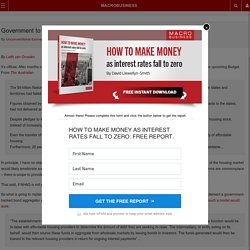 After months of speculation, the Turnbull Government will axe the National Housing Affordability Agreement (NHAG) in the upcoming Budget. From The Australian: In principle, I have no objection to the Government providing subsidised rental accommodation (although freeing-up the supply-side of the housing market would likely ameliorate some of the pressures). In fact, given Australia’s busted rental market – whereby insecure one-year rental terms are commonplace – there is scope to provide longer-term leases that provide renters with greater security of tenure. That said, if NHAG is not delivering as promised, then it should rightfully be cancelled and replaced with something else. So what is going to replace NHAG? Scott Morrison’s recent taxpayer junket to London was aimed, in part, to learn from Londoners about such a scheme.

Still, it’s worth giving it a crack. unconventionaleconomist@hotmail.com. Nocookies. No Cookies. Hospitals, housing and dental services ripe for privatisation, says Productivity Commission report. Public hospitals, social housing and palliative care services are ripe for privatisation, outsourcing and other reforms to inject greater competition into what have been public sector monopolies, the Productivity Commission has found. 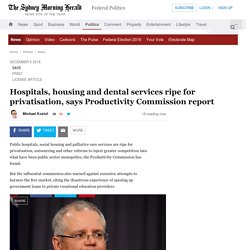 But the influential commission also warned against excessive attempts to harness the free market, citing the disastrous experience of opening up government loans to private vocational education providers. Of 26 services it assessed, the commission identified only five as being best-suited to more competition: end-of-life care, human services in remote Indigenous communities, public dental services, public hospitals and social housing. Others, such as disability services, jails, residential aged care and schools, could potentially benefit from reform but should be left alone for the time being, it urged.

Australia’s Public Housing System is Broken. Yet isolated examples of such behaviour mask what a growing number feel is a far more important issue in terms of deep seated structural problems in public housing which see a system which is financially unsustainable and failing to deliver services which are appropriate to meet the needs of modern public housing tenants. 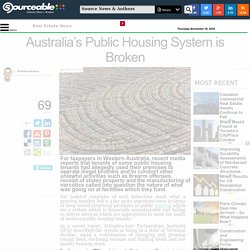 In a recent report, Infrastructure Partnerships Australia (IPA) described the system as being in a state of ‘terminal decline’, amid a combination of changing and growing tenant need, declining revenue and funding levels and low quality housing stock. In its report, IPA points out that more than 250,000 Australian households are currently sitting on public housing waiting lists, with more than half of the highest priority households being forced to wait more than two years for placement. It says the system is suffering from a number of factors. Ex-prisoners left homeless in Tasmania after housing help program axed, documents reveal. Updated Every former inmate leaving Risdon Prison who has applied for public housing in the past year has been knocked back, confirming the "worst fears" of the Tenants Union of Tasmania. 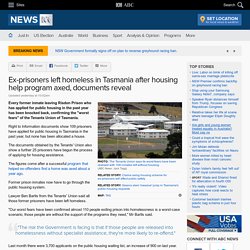 Right to Information documents show 109 prisoners have applied for public housing in Tasmania in the past year, but none has been allocated a house. The documents obtained by the Tenants' Union also show a further 25 prisoners have begun the process of applying for housing assistance. The figures come after a successful program that helped ex-offenders find a home was axed about a year ago. Former prison inmates now have to go through the public housing system. Lawyer Ben Bartls from the Tenants' Union said all those former prisoners have been left homeless. "Our worst fears have been confirmed almost 110 people exiting prison into homelessness is a worst-case scenario, those people are without the support of the programs they need," Mr Bartls said. Almost 20,000 public housing units to be transferred to not-for-profits. Loaded: 0% Progress: 0% Sydney's homeless tell minister what they need. 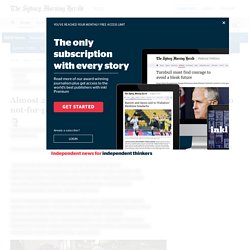 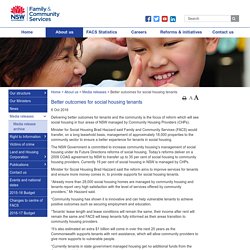 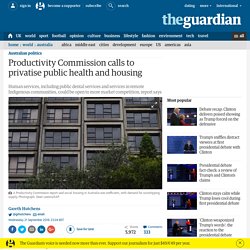 The Productivity Commission has said they are among six “priority areas” in the human services sector where the quality of services could be greatly improved if people are given a greater say over how they use them. It has released a preliminary report, Introducing Competition and Informed User Choice into Human Services: Identifying Sectors for Reform, explaining how those six priority areas could be reformed and asking for public feedback. A recommendation from the Harper review of Australia’s competition laws, released in early 2015, advised that “user choice” be placed at the heart of service delivery in the human services sector. Homeless charity hands out eviction notices to its own tenants - Local. A leading homeless charity has come under fire after handing out eviction notices to tenants living in properties it owns in the capital. 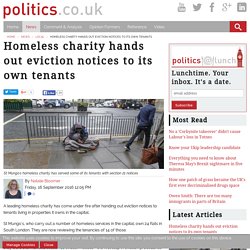 St Mungo's, who carry out a number of homeless services in the capital, own 24 flats in South London. They are now reviewing the tenancies of 14 of those. Tenants of the flats say they were asked by the charity to attend their offices, where they were then handed section 21 eviction notices - the first step in eviction procedures.

"I'm so stressed out about this," one person, who didn't wish to be named, told Politics.co.uk. "I've got no place to go, but St Mungo's have basically told me that I have outstayed my welcome. " "They told me to go to the local council for help. A group of tenants met with housing activists and members of the local branch of Unite last night, to discuss their next move. "They were basically just told to present at the homeless department at the council," he said. The regional director for St Mungo's, Kellie Murphy, said: ACAT rules public housing tenant can keep shipping container.

A public housing tenant has warded off a legal challenge against a shipping container she placed in her Tuggeranong backyard. 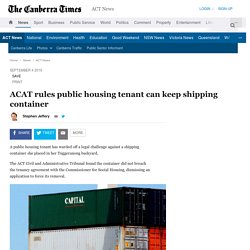 The ACT Civil and Administrative Tribunal found the container did not breach the tenancy agreement with the Commissioner for Social Housing, dismissing an application to force its removal. The commissioner claimed the container damaged the land and stormwater easement on which it was standing and was an alteration or addition made without permission of the lessor, both of which constituted a breach of the tenancy agreement. But tribunal senior member Heidi Robinson found consent for the container was "unreasonably withheld" and found no evidence to suggest it would cause physical damage on other parts of the property. The decision was published as shipping containers spread across Canberra's suburbs, with greater demand for the structures in residential areas in recent years. "The applicant's block is both large and distinctively set back from the road," she said. Addressing the housing affordability crisis - City West Housing.

Broome residents say government housing three-strikes policy is failing and leaving people in danger. Updated Three residents of Broome's Anne Street precinct — locally known as the Bronx due to high rates of crime and disadvantage — have called for an urgent public meeting due to claims that government housing three-strikes policy is leaving people in danger. 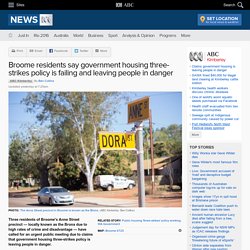 The three women have experienced threats of violence and are not using their surnames for fear of reprisals. "I'm forced to take out two restraining orders on two of those tenants," Jude told ABC Kimberley radio. "Because of racial abuse, because of harassment, because of threats; it's very stressful, it's very traumatic. " Jude said her government housing neighbours play loud music late at night, fight, deal drugs, enter her garden and try to break into her car, but nothing has been done about her complaints.

WA Government kicks out more public housing tenants. Kim Macdonald - The West Australian Nearly ten households are kicked out of public housing each week under the State Government’s three-strikes-you're-out policy. The number has grown in recent years, with 495 households forced out in the 2015-16 financial year, up about 20 per cent from the 389 households in 2014-15 and 456 in 2013-14. Of the 495 households forced out of public homes, 313 households — or about six each week — refused to leave and were evicted by bailiffs, and 134 households were forced out by court order. Detention operator Serco eyes NSW public housing. Detention centre operator Serco wants to move into NSW public housing, and is lobbying to bring a controversial business model trialled on asylum seekers in Britain to Sydney. Serco needs to plug the revenue hole left as the federal government closes down immigration detention centres, once its biggest Australian money-spinner.