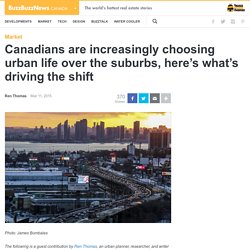 She works as a research and planning consultant in Toronto with a range of public, private, and non-profit clients. She holds a PhD in planning from the UBC School of Community and Regional Planning. Recently, academic researchers and journalists have described changing housing preferences in Canada and the US, from single-family detached housing in suburban neighbourhoods to urban mid-rise and high-rise housing types. 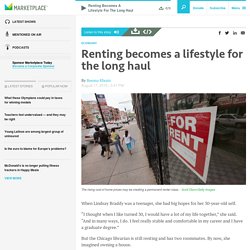 Chinese real estate investors are reshaping the market. Paul Shen can tick off the reasons Mainland Chinese people buy property in Canada as surely as any fast-talking B.C. realtor. 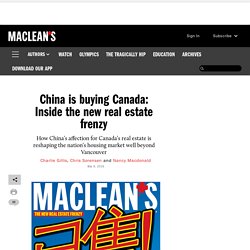 Some long to escape the fouled earth and soupy air of their country’s teeming cities, he explains, while others are following relatives to enclaves so well-populated by other Chinese expats they hardly feel like foreigners. The richest, of course, regard homes in the West as stable vessels for disposable cash, but Shen lays no claim to such affluence. Ascension of High-Rise Retirement Communities. The Growing Problem of Suburban Poverty - Economy. When Ellen got the phone call from Hope House, a long-term homeless shelter in Villa Park, Illinois, confirming an available room, she was overcome with relief. 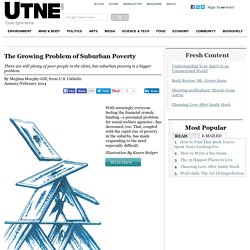 “The tears just flowed,” she says. “Even the woman on the other end was crying.” It had been a particularly emotional day. Poverty Moves to the Suburbs. North America is seeing a rising change in the distribution of wealth in its cities. 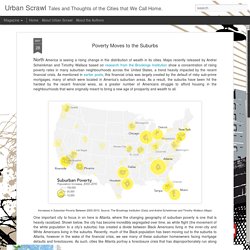 Maps recently released by Andrei Scheinkman and Timothy Wallace based on research from the Brookings Institution show a concentration of rising poverty rates in many suburban neighbourhoods across the United States, a trend heavily impacted by the recent financial crisis. As mentioned in earlier posts, this financial crisis was largely created by the default of risky sub-prime mortgages, many of which were located in America's suburban areas. 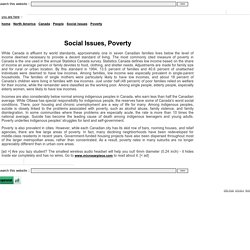 The most commonly cited measure of poverty in Canada is the one used in the annual Statistics Canada survey. Statistics Canada defines low income based on the share of income an average person or family devotes to food, clothing, and shelter needs. Toronto’s sky-high housing costs shifts hunger, poverty to the suburbs: report. TORONTO — The face of hunger and poverty in the region has undergone a “geographic shift”–even as Toronto’s downtown core prospers, demand for food banks has shot up 45 per cent in the city’s inner suburbs. 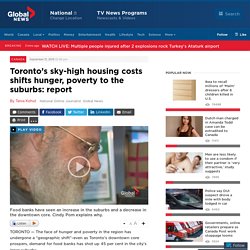 The Daily Bread Food Bank released its annual report on Monday, Who’s Hungry: A Tale of Two Cities, which profiles food insecurity in Canada’s largest city. The release of this report coincides with Hunger Awareness Week, a cross-Canada initiative to shed light on the solvable problem of food insecurity in Canada. READ MORE: Going hungry: Digesting Canada’s food security problem. Poverty hides in the suburbs: Will 'priority neighbourhoods' help? A single mother with a five-year-old child, Bobbi-Jo Campbell does not like her neighbourhood. 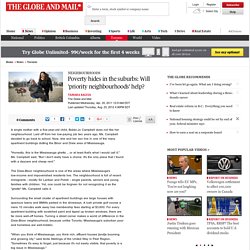 Laid off from her low-paying job two years ago, Ms. Campbell decided to go back to school. Now, she and her son live in one of the many apartment buildings dotting the Bloor and Dixie area of Mississauga. "Honestly, this is the Mississauga ghetto … or at least that's what I would call it," Ms. Campbell said. Canadian Prime Minister Vows to Tackle Housing Affordability. Study: American Jobs Moving Out of Cities, Into Suburbs. Where have American jobs gone? 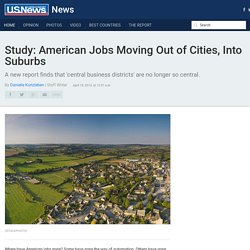 Some have gone the way of automation. Others have gone overseas. And now, it appears that they're also moving to the suburbs. From 2000 to 2010, the share of jobs near city centers declined in 91 of the 100 largest U.S. metropolitan areas, according to a new report from the Brookings Institution, a Washington, D.C. think tank. Why do condos even exist? It sounds like a dumb question – they exist because people like the security of owning a home combined with the services and lower costs that apartments offer, duh! But upon further reflection, condominium-style tenure can be a bit problematic. The main problem, as I see it, is that a building that’s been carved up into condo units can almost never be redeveloped. So much so that preservationists have been known to cheer on developers doing condo and co-op conversions of historic properties: Indeed, sometimes preservation advocates look to condo developers as white knights. Since the Bialystoker Center for Nursing and Rehabilitation on East Broadway closed last year, Laurie Tobias Cohen, the executive director of the Lower East Side Jewish Conservancy, has been “extremely eager” for a developer to buy the historic building and convert it to co-ops or condos.

How architects are rethinking (and rebuilding) the family home to make it last for generations. When a strange young man entered her bedroom, Kelly Rossiter wasn’t entirely surprised. 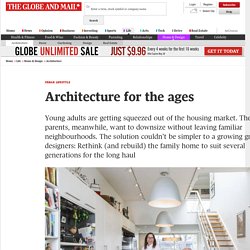 “He had had a bit too much to drink,” says Rossiter, who lives in Toronto, “and had gotten lost on the way to the front door.” On the way, that is, from a party at her daughter’s place; Rossiter and her husband Lloyd Alter live below their daughter Emma, now 28, in a 1913 house that’s been split into two apartments. The door that links the suites in their home is usually left unsecured.

Ethnographies of Future Infrastructures. By Laura Forlano, IIT Institute of Design Article 4 in the series Data, Design and Civics: Ethnographic Perspectives On April 1, Secretary of Defense Ashton Carter announced a $317 million federally funded initiative in textile innovation and manufacturing—a national consortium of public and private organizations to be led by MIT.

It’s only the most recent project of the Obama administration’s National Network for Manufacturing Innovation, a major effort to re-invigorate the American economy. This ambitious initiative to build manufacturing infrastructure nationwide plans an initial network of 45 Manufacturing Innovation Institutes over 10 years. Personal care homes not the only answer to seniors boom: Manitoba study - Manitoba. A "middle option" for seniors could alleviate some of the demand for personal care home beds as the population rapidly ages, a new study from the University of Manitoba suggests. Right now 25 per cent of Manitobans aged 85 and older live in personal care homes, and the report says the need for beds is slated to spike 50 per cent in the next 15 years. The study examined supportive housing as an alternative to creating more personal care beds. Ottawa should crack down on money laundering in Canadian housing, experts say.

Ottawa needs to beef up its efforts to combat money laundering in the real estate industry, say critics and housing observers after documents revealed that dozens of companies haven't shown how they're trying to detect questionable transactions. The Canadian Press reported this week that at least 85 firms have not fully implemented compliance plans intended to flag questionable transactions — including cases where money laundering is suspected — nearly 15 years after they were legally required to do so. How Your Facebook Network Drives Your Housing Decisions.

Fear of missing out may be a more powerful force than any of us realize. According to a new study, FOMO—or something like it—may have a direct influence on how people make decisions in the housing market. And that influence appears to be profound enough to affect housing prices at the county level. A new paper released by the National Bureau of Economic Research finds a link between a person’s Facebook network and her housing investments.

Uk.businessinsider. Victoria might double housing grant. Jay Pitter wants to erase the ‘spatial shame’ surrounding social housing. How architects are rethinking (and rebuilding) the family home to make it last for generations. Skaburskis. The Future of Social Housing: Urban Low-Rise, High-Density Developments. The Future of Urban Housing. Brandon G. Donnelly — The future of housing in Toronto. Four Visions for the Future of Housing. The Future of Housing.

Meet the Future of City Housing. 5 Trends That Will Shape The Future Of Tiny Housing. The Future of Housing Is Temporary, Biodegradable, and on the Move. Future of housing hub. For clues to Canada’s housing future, look to Australia. Futureofpublichousing. Think big: Is this the future of urban housing? Toronto CMA: The Future of Housing — Urban Futures. A Calgary Home Makes Space For Three Generations. How architects are rethinking (and rebuilding) the family home to make it last for generations. Living arrangements of seniors. Choosing the Unwalkable Suburbs, or Settling for Them? Three Cities Within Toronto 2010 Final. Suburban Poverty Has Arrived In Toronto, Food Bank Data Shows. Choosing the Unwalkable Suburbs, or Settling for Them? On Jane Jacobs' 100th Birthday, a Look at Her Predictions From the 'Dark Age Ahead' Is Your Neighborhood Changing? It Might Be Youthification, Not Gentrification.

Federal budget's $2.3B for non-profit housing welcomed by co-ops. Co-op Housing: What It Is and How It Works.