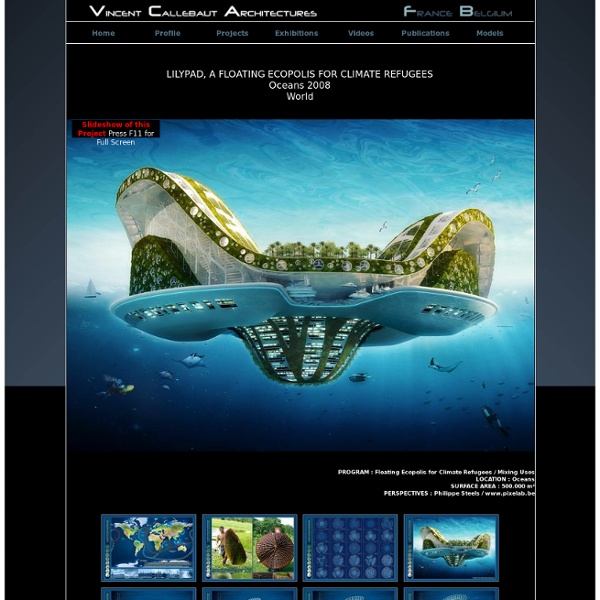 PROGRAM : Floating Ecopolis for Climate Refugees / Mixing Uses LOCATION : Oceans SURFACE AREA : 500.000 m² PERSPECTIVES : Philippe Steels / www.pixelab.be Further to the anthropogenic activity, the climate warms up and the ocean level increases. According to the principle of Archimedes and contrary to preconceived notions, the melting of the arctic ice-floe will not change the rising of the water exactly as an ice cube melting in a glass of water does not make its level rise. However, there are two huge ice reservoirs that are not on the water and whose melting will transfer their volume towards the oceans, leading to their rising. It deals with the ice caps of Antarctic and Greenland on the one hand, and the continental glaciers on the other hand. Another reason of the ocean rising, that does not have anything to do with the ice melting is the water dilatation under the effect of the temperature. Vincent Callebaut Architect Vincent Callebaut Architecte

Masdar City Masdar City will host the headquarters of the International Renewable Energy Agency (IRENA).[6][7] The city is designed to be a hub for cleantech companies. Its first tenant is the Masdar Institute of Science and Technology, which has been operating in the city since it moved into its campus in September 2010.[8][9][10] The city as a whole was originally intended to be completed by 2016 but due to the impact of the global financial crisis, the date has now been pushed back to between 2020 and 2025. Due to the limitations found during the initial implementation, the city is now aiming to be low carbon.[4][5] Design and intent[edit]

GREEN FLOAT/Shimizu's Dream - Shimizu Corporation Going Beyond CO2 Reduction to Carbon Negative To create a city that absorbs CO2 like a plant, we will employ environmental technologies to achieve a carbon negative system. Switch to a Compact City and Conversion of Industrial Structure (CO2 Reduction: About 40%)

Staycation Relaxing in a backyard swimming pool is one of the activities sometimes enjoyed during a staycation. A staycation (a portmanteau of "stay" and "vacation"), or holistay (a portmanteau of "holiday" and "stay"), is a period in which an individual or family stays home and participates in leisure activities within driving distance of their home and does not require overnight accommodations. Alternatively, and commonly in UK usage, it is a holiday spent in one's home country rather than abroad.[1] Common activities of a staycation include use of the backyard pool, visits to local parks and museums, and attendance at local festivals and amusement parks.

Skolkovo Innovation Center The logo of Skolkovo The Scheme of Work[edit] In March 2010 Vekselberg announced the necessity of developing a special legal order in Skolkovo and emphasized the need to offer a tax holiday lasting 5–7 years.[6] In April 2010 Russian President Dmitry Medvedev charged the government with working out specific legal, administrative, tax and customs regulations on Skolkovo.[7] In May 2010 Dmitry Medvedev introduced two bills regulating working conditions in Skolkovo. The bills were adopted by the State Duma in September of that year[8] and, on 28 September 2010, the President of the Russian Federation signed the bills into federal law.[9][10]

Wetropolis According to the head of Thailand’s National Disaster Warning Center, Meteorologist Smith Dharmasaroja, by 2030 much of Bangkok will lie under 1.5 meters (5 feet) of seawater. With the city sinking 10 cm below sea level, the latter rising by 40 cm annually, the safest place to create architecture is above water. Thus, a Bangkok-based architecture firm S+PBA recently unveiled drawings for a self-sustaining community that can thrive with the ebb and flow of rising tides. Sustainable City Development Sustainable City Development Malmö, Sweden "From industrial waste land to sustainable city" Sea-Level Rise for the Coasts of California, Oregon, and Washington: Past, Present, and Future Tide gauges show that global sea level has risen about 7 inches during the 20th century, and recent satellite data show that the rate of sea-level rise is accelerating. As Earth warms, sea levels are rising mainly because ocean water expands as it warms; and water from melting glaciers and ice sheets is flowing into the ocean. Sea-level rise poses enormous risks to the valuable infrastructure, development, and wetlands that line much of the 1,600 mile shoreline of California, Oregon, and Washington. As those states seek to incorporate projections of sea-level rise into coastal planning, they asked the National Research Council to make independent projections of sea-level rise along their coasts for the years 2030, 2050, and 2100, taking into account regional factors that affect sea level.