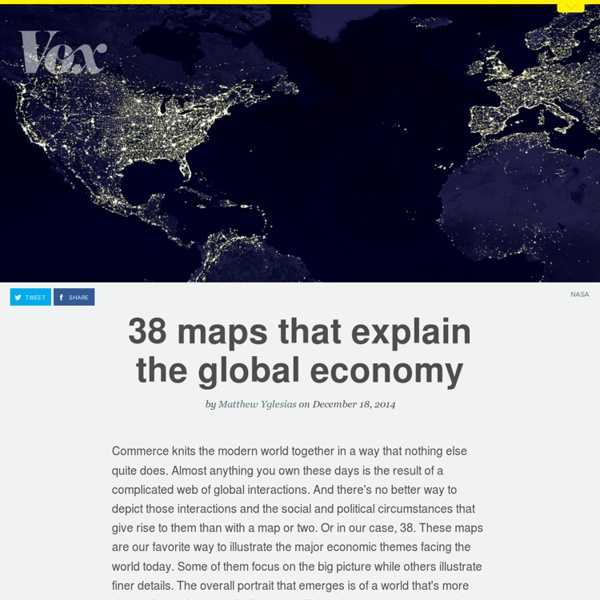 Commerce knits the modern world together in a way that nothing else quite does. Almost anything you own these days is the result of a complicated web of global interactions. And there's no better way to depict those interactions and the social and political circumstances that give rise to them than with a map or two. Or in our case, 38. These maps are our favorite way to illustrate the major economic themes facing the world today. Some of them focus on the big picture while others illustrate finer details. World GDP per capita World GDP per capitaGDP per capita isn't a perfect proxy for living standards (it doesn't consider inequality, for example, or the fact that the weather is way nicer in Spain than Denmark), but it's the best quick summary measure of economic capacity that we have. A world of regions The sinews of trade A world of cities Basic commodities Oil import/export map Oil import/export mapBP's Statistical Review of World Energy includes this map of global trade flows of oil.

Territoires Md° : dodo internet et inégalités accès mondiale Scientists track Internet usage as it pulses across the globe daily Contact: Robert Perkins at (213) 740-9226 or perkinsr@usc.edu Researchers studying how big the Internet is have found that it “sleeps,” almost like a living creature. China’s Record Dumping Of US Treasuries Leaves Goldman Speechless On Friday, alongside China’s announcement that it had bought over 600 tons of gold in “one month”, the PBOC released another very important data point: its total foreign exchange reserves, which declined by $17.3 billion to $3,694 billion. We then put China’s change in FX reserves alongside the total Treasury holdings of China and its “anonymous” offshore Treasury dealer Euroclear (aka “Belgium”) as released by TIC, and found that the dramatic relationship which we first discovered back in May, has persisted – namely virtually the entire delta in Chinese FX reserves come via China’s US Treasury holdings. As in they are being aggressively sold, to the tune of $107 billion in Treasury sales so far in 2015. We explained all of his on Friday in “China Dumps Record $143 Billion In US Treasurys In Three Months Via Belgium“, and frankly we have been surprised that this extremely important topic has not gotten broader attention. Then, to our relief, first JPM noticed. Back to Goldman:

A Desirable-Future Haiku — The Message Recently I sent a twitter request out into the wider internets. I got 23 responses, which I am running (with permission) below. I’ll tell you who I selected as the winner in a moment, but first I’d like to tell you what I learned. It’s a hard assignment. The World Factbook People from nearly every country share information with CIA, and new individuals contact us daily. If you have information you think might interest CIA due to our foreign intelligence collection mission, there are many ways to reach us. If you know of an imminent threat to a location inside the U.S., immediately contact your local law enforcement or FBI Field Office.

Mapping the Flow of International Trade According the UN’s Comtrade database, the global market for imported goods totaled $15.6 trillion in 2015. This map shows where those goods came from and where they went, each dot representing $1 billion in value. Select a country to see the flow of goods in and out of that country. The Flow of International Trade (full screen) Full screen version / Youtube With the election of Donald Trump, international trade is suddenly at the top of the U.S. agenda. Les dix meilleurs cartes de la ville de New york en 2015 Despite spending an inordinate amount of time each day looking at maps, it is beyond me to select a list of the best maps from among everything posted last year on the web. There are far too many, more than I could ever hope to find, for the list to have any real meaning. Sticking to what I know best, I have compiled my favorite maps of 2015 that cover New York City. Because of its density and diversity of people and culture, its high availability of public data, and its large tech community, New York makes for some outstanding maps. With all the great work that has been done, this list could really be many times larger. But sticking to a “top 10” format, these are, in my opinion, the very best, listed in no particular order.

Risk Experts Who Predicted 2008 Financial Crash Believe GMOs To Be Riskier Than 2008 Crash Image: Painting by Anthony Freda: www.AnthonyFreda.com Risk analyst Nassim Nicholas Taleb predicted the 2008 financial crisis, by pointing out that commonly-used risk models were wrong. Taleb – a distinguished professor of risk engineering at New York University, and author of best-sellers The Black Swan and Fooled by Randomness – Taleb became financially independent after the crash of 1987, and wealthy during the 2008 financial crisis. Taleb noted last year that most boosters for genetically modified foods (GMOs) – including scientists – are totally ignorant about risk analysis. Taleb said that proliferating GMOs could lead to “an irreversible termination of life [on] the planet.” This month, Taleb – and tail-hedging expert Mark Spitznagel, who also made a hugely profitable billion dollar derivatives bet on the stock market crash of 2008 – wrote in the New York Times:

If Patients Only Knew How Often Treatments Could Harm Them Photo If we knew more, would we opt for different kinds and amounts of health care? Despite the existence of metrics to help patients appreciate benefits and harms, a new systematic review suggests that our expectations are not consistent with the facts. Most patients overestimate the benefits of medical treatments, and underestimate the harms; because of that, they use more care. The study, published in JAMA Internal Medicine and written by Tammy Hoffmann and Chris Del Mar, is the first to systematically review the literature on the accuracy of patients’ expectations of benefits and harms of treatment.