A Year in the Life of Earth's CO2 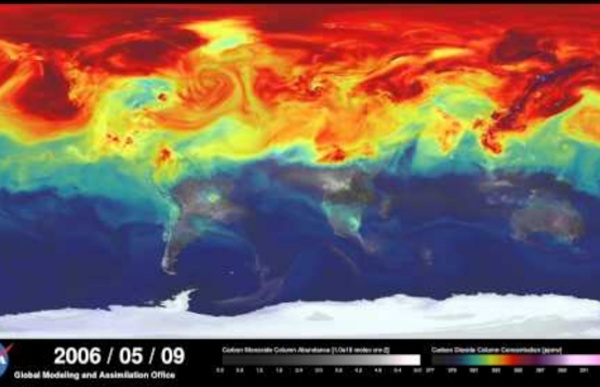 projets SPIRIT & SPIRIT2 Summary The SPIRIT (SPOT 5 stereoscopic survey of Polar Ice: Reference Images and Topographies) project took place during the Fourth International Polar Year (2007/09) and built up a large archive of SPOT 5 stereoscopic images covering most polar ice masses. It allowed the free delivery of high resolution (5-m) ortho-images and 40-m digital elevation models (see "The Product"), data which have already contributed to >100 publications. These data are freely available for the glaciological community (see "Get Data"). In 2013, CNES, Airbus D&S and LEGOS decided to launch a new acquisition campaign, SPIRIT2. SPOT5-HRS will acquire new stereo-pairs from November 2013 to April 2014 in Antarctica and July-October 2014 in the Arctic regions.

Climate.NASA: Causes › en español Scientists attribute the global warming trend observed since the mid-20th century to the human expansion of the "greenhouse effect"1 — warming that results when the atmosphere traps heat radiating from Earth toward space. Certain gases in the atmosphere block heat from escaping. Long-lived gases that remain semi-permanently in the atmosphere and do not respond physically or chemically to changes in temperature are described as "forcing" climate change.

En-ROADS - Climate Interactive Climate Change Solutions Simulator En-ROADS is a transparent, freely-available policy simulation model that gives everyone the chance to design their own scenarios to limit future global warming. You can try your own experiments and assumptions, and get immediate feedback on the likely impacts. The simulation, developed by Climate Interactive, Ventana Systems, and MIT Sloan, runs on an ordinary laptop in a fraction of a second, is available online, offers an intuitive interface, has been carefully grounded in the best available science, and has been calibrated against a wide range of existing integrated assessment, climate and energy models. A wide range of people have used En-ROADS, including members of the U.S. Congress, HSBC bank, the Hewlett Foundation, local community groups, the UN Secretary-General’s Office, university professors around the world, leading science educator Bill Nye, and many others.