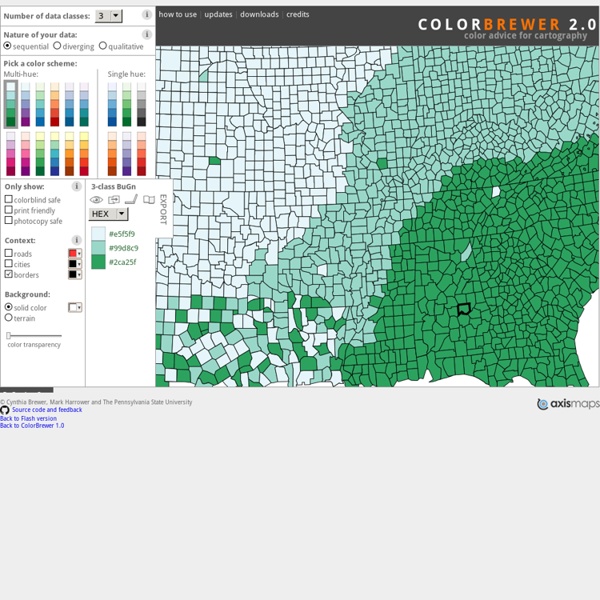 SVG Crowbar A Chrome-specific bookmarklet that extracts SVG nodes and accompanying styles from an HTML document and downloads them as an SVG file—A file which you could open and edit in Adobe Illustrator, for instance. Because SVGs are resolution independent, it’s great for when you want to use web technologies to create documents that are meant to be printed (like, maybe on newsprint). It was created with d3.js in mind, but it should work fine no matter how you choose to generate your SVG. The Bookmarklet 40 maps that explain the internet The internet increasingly pervades our lives, delivering information to us no matter where we are. It takes a complex system of cables, servers, towers, and other infrastructure, developed over decades, to allow us to stay in touch with our friends and family so effortlessly. Here are 40 maps that will help you better understand the internet — where it came from, how it works, and how it's used by people around the world. How the internet was created

Visualization: Map   The Google Map Chart displays a map using the Google Maps API. Data values are displayed as markers on the map. Data values can be coordinates (lat-long pairs) or addresses. The map will be scaled so that it includes all the identified points. If you want your maps to be line drawings rather than satellite imagery, use a geochart instead.

Excel Hack Map Lately I've been working on two unrelated projects that just happened to intersect in a useful way. The first project was playing with spatial binning techniques as one of the ways to map relative proportions of things without being tied to (arbitrary) political boundaries. The second was messing around with Excel pivot tables to find meaningful long term time-of-day trending in traffic fatality data (inspired by Nathan Yau's work here). RHSD - Innovation with Color This post imbues the importance of innovation with color in data visualization, offers a variety of resources and reference materials, and encourages personal innovation with color as absolutely vital to moving your visual communication of data forward in Tableau. The effective use of color is fundamental to the visual communication of data. As our eyes take in color, they communicate with the hypothalamus, which in turn signals the pituitary gland. Then, on to the endocrine system, the thyroid gland signals the release of hormones. Those hormones influence BEHAVIORS and EMOTIONS. Color is so powerful, in fact, that the effective use of color can improve learning by 75% and increase comprehension by up to 73%. 1

The Likert Question Question » Data Revelations Overview I’ve been looking at various examples over at Stephen Few’s Perpetual Edge web site and one example (this one) really resonates with me as it deals with how to visualize Likert Scale questions. For the past five years I’ve used Tableau to analyze literally thousands of survey questions, but I’ve never really been happy with how I presented Likert Scale questions results. That said, a new version of Tableau has brought new capabilities… But first, just what is a Likert Scale question?

Choosing the best way to indicate map scale By Aileen Buckley, Mapping Center Lead In a previous blog entry, I asked, “Do all maps need a scale bar and north arrow?” I answered, “No” and talked a little about direction indicators like north arrows, but I didn’t really go into any detail about scale bars. Here is a bit more on map scale indicators, like scale bars. Almost all maps are drawn to a scale, so it should be possible for these maps to indicate what the scale of the map is.

Visualization: Intensity Map   An intensity map that highlights regions or countries based on relative values. The google.charts.load package name is "intensitymap". The visualization's class name is google.visualization.IntensityMap. The first column should be a string, and contain country ISO codes or USA state codes. Any number of columns can follow, all must be numeric.