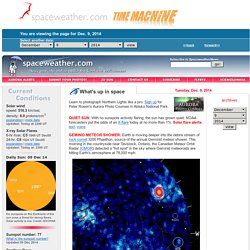 NOAA forecasters put the odds of an X-flare today at no more than 1%. Solar flare alerts: text, voice. Witter / ? Virgin Galactic's SpaceShipTwo rocket involved in accident over Mojave Desert. Virgin Galactic's SpaceShipTwo space tourism rocket exploded in flight over the Mojave Desert, according to a witness, killing one person and injuring another. 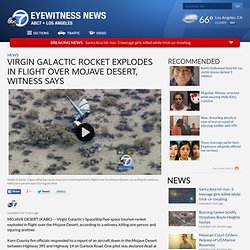 Kern County fire officials responded to a report of an aircraft down in the Mojave Desert between Highway 395 and Highway 14 on Garlock Road. One pilot was declared dead at the scene. Rescue crews treated an injured pilot on scene and transported the person by helicopter to Antelope Valley Hospital with "major injuries. " Debris from SpaceShipTwo was seen in the Mojave from AIR7 HD. "Space is hard, and today was a tough day," said George Whitesides, chief executive of Virgin Galactic. PHOTOS: Virgin Galactic SpaceShipTwo accident Virgin Galactic's SpaceShipTwo space tourism rocket exploded during a test flight over the Mojave Desert on Friday, Oct. 31, 2014. SpaceShipTwo, typically flown by a crew of two pilots, has been under development at Mojave Air and Spaceport in the desert northeast of Los Angeles. 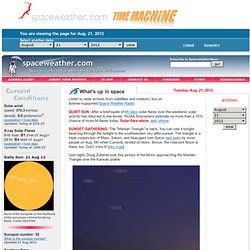 NOAA forecasters estimate no more than a 15% chance of more M-flares today. Solar flare alerts: text, phone. SUNSET GATHERING: The "Martian Triangle" is back. You can see it tonight beaming through the twilight in the southwestern sky after sunset. The triangle is a triple conjunction of Mars, Saturn, and blue-giant star Spica--last seen by most people on Aug. 5th when Curiosity landed on Mars. Last night, Doug Zubenel took this picture of the Moon approaching the Martian Triangle over the Kansas prairie: More images of the gathering may be found in our realtime photo gallery: Realtime Space Weather Photo Gallery RED SPRITES: High above Earth in the realm of meteors and noctilucent clouds, a strange and beautiful form of lightning dances at the edge of space. Diagram: How to Look for Sprites (used with permission of sky-fire.tv) Realtime Aurora Photo Gallery. Groenne. Broadcast Yourself. TheSunToday : X1.4 flare peak at 16:52.

Angry Birds fly out of this world. It's A Bird, It's A Plane No It's Stratolaunch. Entrepreneur and philanthropist Paul G. 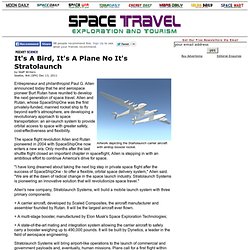 Allen announced today that he and aerospace pioneer Burt Rutan have reunited to develop the next generation of space travel. Allen and Rutan, whose SpaceShipOne was the first privately-funded, manned rocket ship to fly beyond earth's atmosphere, are developing a revolutionary approach to space transportation: an air-launch system to provide orbital access to space with greater safety, cost-effectiveness and flexibility. The space flight revolution Allen and Rutan pioneered in 2004 with SpaceShipOne now enters a new era. Only months after the last shuttle flight closed an important chapter in spaceflight, Allen is stepping in with an ambitious effort to continue America's drive for space. 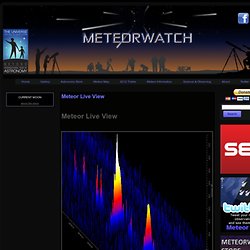 The friction created by the air causes the Meteor to burn up at extremely high temperatures creating the white “shooting star” that we are all familiar with. This process also ionises the air along the trail making it possible to reflect radio waves. Two faint Dracos and the Big Dipper. Draconids and Aurora. International Collaboration in Meteor Science. Draconids2011_liverpool1. Draconids Meteor Shower on 8 October 2011. Several studies1 predict that on 8 October 2011, Earth will encounter several trails of dust produced by comet 21P/Giacobini–Zinner in the late 19th and early 20th century. 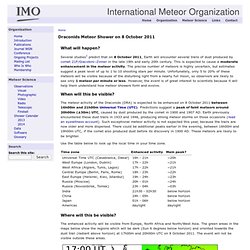 This is expected to cause a moderate enhancement in the meteor activity. The precise number of meteors is highly uncertain, but estimates suggest a peak level of up to 1 to 10 shooting stars per minute. Unfortunately, only 5 to 20% of these meteors will be visible because of the disturbing light from a nearly full moon, so observers are likely to see only 1 meteor per minute or less. Ultraviolet light shone on cold winter conundrum.

9 October 2011Last updated at 18:02 By Richard Black Environment correspondent, BBC News Snow and ice has brought disruption to the UK in recent winters - and the varying Sun could be responsible Recent cold winters that brought chaos to the UK and other places in northern Europe may have their roots in the Sun's varying ultraviolet emissions. 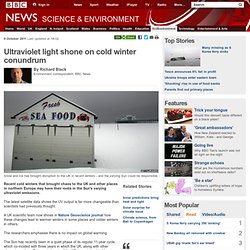 The latest satellite data shows the UV output is far more changeable than scientists had previously thought. A UK scientific team now shows in Nature Geoscience journal how these changes lead to warmer winters in some places and colder winters in others. The researchers emphasise there is no impact on global warming. Continue reading the main story “Start Quote You might be able to say 'this winter is more likely to be warm' or 'more likely to be cold' with more accuracy” End QuoteDr Adam ScaifeUK Met Office But unusually warm weather was felt both further south, around the Mediterranean Sea, and further north in Canada and Greenland.