Google. What to do about all that space junk? Cue the lasers. In the Japanese anime “Planetes,” the year is 2075 and teams of low-paid astronauts work to clean up space debris orbiting around the earth. 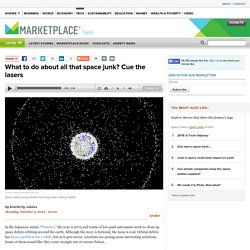 Although the story is fictional, the issue is real. Orbital debris has been a problem for a while, but as it gets worse, scientists are posing some interesting solutions. Some of them sound like they come straight out of science fiction. Tens of thousands of pieces of orbital debris — or "space junk" — are zooming around the planet at about 17, 500 miles per hour and posing a risk to the International Space Station and the satellites on which many of us depend.

And that tally only counts debris bigger than a softball. “Something even the size of a marble traveling that fast, if it were to collide with an operational satellite, would certainly disable it," said Raymond Sedwick, an aerospace engineer and director of the University of Maryland's Center for Orbital Debris Education and Research. Space Debris Illustrated: The Problem in Pictures. Want to stay on top of all the space news? 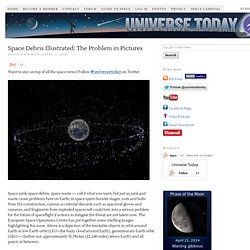 Follow @universetoday on Twitter Space junk, space debris, space waste — call it what you want, but just as junk and waste cause problems here on Earth, in space spent booster stages, nuts and bolts from ISS construction, various accidental discards such as spacesuit gloves and cameras, and fragments from exploded spacecraft could turn into a serious problem for the future of spaceflight if actions to mitigate the threat are not taken now. The European Space Operations Centre has put together some startling images highlighting this issue. Above is a depiction of the trackable objects in orbit around Earth in low Earth orbit (LEO–the fuzzy cloud around Earth), geostationary Earth orbit (GEO — farther out, approximately 35,786 km (22,240 miles) above Earth) and all points in between. Officials from the space shuttle program have said the shuttle regularly takes hits from space debris, and over 80 windows had to be replaced over the years.

Stardust (spacecraft) Was a 300-kilogram robotic space probe launched by NASA on February 7, 1999. 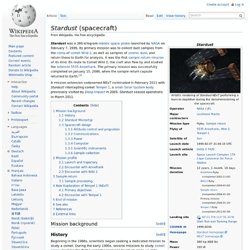 Its primary mission was to collect dust samples from the coma of comet Wild 2 , as well as samples of cosmic dust , and return these to Earth for analysis. It was the first sample return mission of its kind. En route to Comet Wild 2, the craft also flew by and studied the asteroid 5535 Annefrank . The primary mission was successfully completed on January 15, 2006, when the sample return capsule returned to Earth. [ 1 ] A mission extension codenamed NExT culminated in February 2011 with intercepting comet Tempel 1 , a small Solar System body previously visited by in 2005. . [ edit ] Mission background [ edit ] History Beginning in the 1980s, scientists began seeking a dedicated mission to study a comet.

Comet Wild 2 was selected as the primary target of the mission for the rare chance to observe a long-period comet that has ventured close to the Sun . Handling space debris. How to Clean Up Deadly Space Junk Before Disaster Strikes. See also my NASA pearl. The Problem with Space Debris and Possible Solutions. Once in space, the biggest threat to astronauts and spacecrafts is space debris. 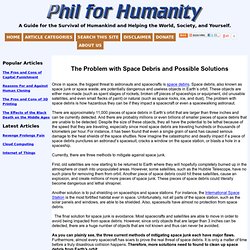 Space debris, also known as space junk or space waste, are potentially dangerous and useless objects in Earth’s orbit. These objects are either man-made (such as spent stages of rockets, broken off pieces of spaceships or equipment, old unusable satellites, and even small flecks of paint) or natural (such as space rocks, ice, and dust). The problem with space debris is how hazardous they can be if they impact a spacecraft or even a spacewalking astronaut. There are approximately 11,000 pieces of space debris in Earth’s orbit that are larger than three inches and can be currently detected. 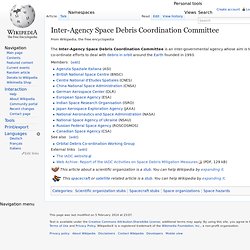 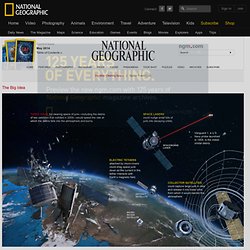 It’s a hypervelocity menace. How can we clean it up? Other NASA scientists worry about getting astronauts off the ground or sending interplanetary probes to Pluto. Until last year, says Johnson, chief scientist at NASA’s Orbital Debris Program Office, “the danger was purely academic.”