Galactic Princess gives you a ship, a universe, and tells you to go make money however you can. “In the wild space, everyone tries to survive the best they can,” writes Mickaël Mancini. 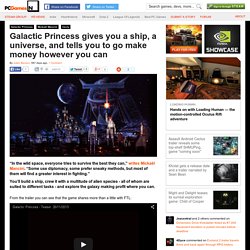 “Some use diplomacy, some prefer sneaky methods, but most of them will find a greater interest in fighting.” You’ll build a ship, crew it with a multitude of alien species - all of whom are suited to different tasks - and explore the galaxy making profit where you can. From the trailer you can see that the game shares more than a little with FTL: Your ship is separated into different rooms for different systems - engine room, brig, lab, etc - much like in FTL. Space. Roberts Space Industries. SpaceSimCentral - The Largest Space and Scifi Gaming Community on the Web. Space Ship Building & Simulation Games - Wow ! - GDNet Lounge. 7 Space Simulators That Let You Explore the Universe. Why should Mars rovers have all the fun? 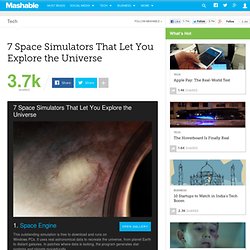 If you're tired of standing by while Curiosity rolls around up there, it's time to head out on the open exosphere and explore the universe for yourself — digitally, of course. SEE ALSO: 10 Must-Follow Tumblrs for Science Lovers A handful of excellent space simulators use real astronomical data to re-create the known universe in three dimensions. Fly through the galaxy at ludicrous speeds, map out humanity's best hope for extrasolar colonization, or mess with physics to create your own cosmic recipes. Some of these simulations stick to our own solar system, while others push the boundaries of our cosmological projections, procedurally generating star systems far beyond our galactic neighborhood. 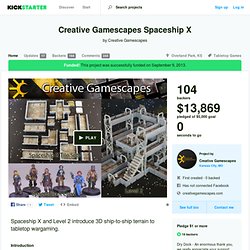 However, plastic injection molded products are really expensive to produce. The mold costs in particular are astronomical. Spaceship X Crewmen: We have had a number of different Spaceship X Crewmen models sculpted for us and have the master molds in hand. One significant goal of the Kickstarter is to fund the production molds and initial production runs of the Spaceship X Crewmen models. Spaceship X Level 2: Spaceship X Level 2, Creative Gamescapes newest gaming set, adds a vertical element to your games and allows multistoried gaming tables to be created. Below are pictures of one set of Spaceship X with one set of Level 2. All we need to Kickstart this thing is your support. Lander: moon landing simulator. Empyrion - Galactic Survival by Eleon Game Studios. Empyrion is a 3D open world, space survival adventure in which you can fly across space and land on planets. 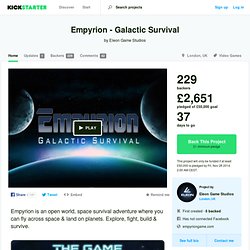 An absolute free-roaming experience awaits you: fly across space and land on planets. The universe is your playground. Survival is key. Each planet has its own characteristics and potentially unforgiving conditions. You can build everything out of blocks and building parts like in Minecraft: large motherships, small spaceships, space and planetary stations, and facilities such as mining robots and solar panels. Craft your own equipment and weapons. Destiny News - Bungie Reveals New Game Called Destiny And It Wont Be On PC. The developper team behind Halo 1, 2 and 3, has revealed their new upcoming project. 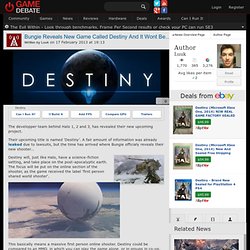 Their upcoming title is named 'Destiny'. A fair amount of information was already leaked due to lawsuits, but the time has arrived where Bungie officialy reveals their new shooter... Destiny will, just like Halo, have a science-fiction setting, and take place on the post-apocalyptic earth. The focus will be put on the online section of the shooter, as the game received the label 'first person shared world shooter'.