Death, drones and driverless cars: how Google wants to control our lives. If you want to understand the future of humanity – where we’re headed, who’ll be in charge, and exactly how worried you should be about that – you could do worse than begin with two unremarkable buildings, on opposite coasts of the US. 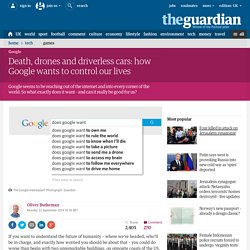 The more famous one, half a mile from Google’s main campus in Mountain View, California, is home to Google X, the search giant’s purportedly secret research lab. A third of UK jobs to be replaced by robots and computers in next 20 years - Gadgets and Tech - Life and Style. More than 10 million roles are likely to be replaced by automated systems, with repetitive, lower-paid jobs (those earning less than £30,000 a year) five times more likely to be made obsolete than higher-paid jobs. 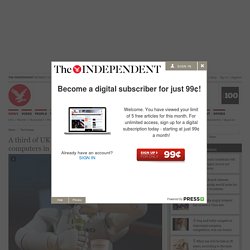 Experts said the trends identified in the report were already well under way, with “high risk” jobs identified in “office and administrative support; sales and services; transportation; construction and extraction; and production.” Many of these professions have already been heavily affected by automated systems, with the report’s authors noting that in London 65 per cent of librarians have lost their jobs since 2001 and almost half of personal assistants and secretaries. Loading gallery In pictures: Artificial intelligence through history.

First passengers on Japanese maglev train travel at speeds of 311 mph - Asia. The maglev trains have been tested before between the cities of Uenohara and Fuefuki but now members of the public have been allowed on board for the first time. 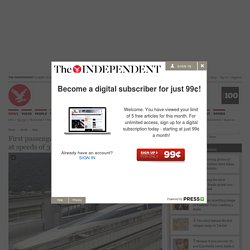 The 27-mile trip went by in a flash for the 100 passengers as the train, which “floats” above tracks using magnetic levitation, hit speeds of 311 mph (500 kmh). Footage of the high-speed ride showed a live display in each carriage keeping a constant record of the velocity as passengers watched the blur through aeroplane-sized windows. The Central Japan Railway Company is running eight days of testing for the experimental maglev Shinkansen train on its test track in Yamanashi Prefecture, the BBC reported. Maglev trains are even faster than Japan's famous bullet trains, which currently travel at about 200 mph (320 kmh). Hendo Hoverboards - World's first REAL hoverboard by Hendo Hover. Government Control. Coming to this story a little belatedly but better late than never. 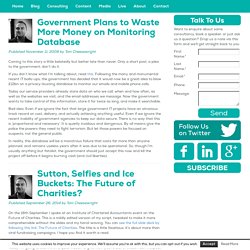 Only a short post, a plea to the government: don’t do it. If you don’t know what I’m talking about, read this. Following the many and monumental recent IT balls-ups, the government has decided that it would now be a great idea to blow £12bn on a privacy-busting database to monitor our emails and mobile phone calls. Today our service providers already store data on who we call, when and how often, as well as the websites we visit, and the email addresses we message.

Intersection: Where Macro Trends Meet Your Market. Futurism is a practice with an increasing level of professionalism and process. 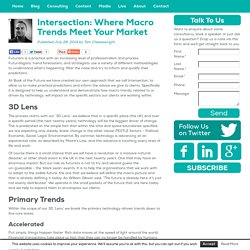 Futurologists, trend forecasters, and strategists use a variety of different methodologies to understand what’s happening, filter the noise and try to inform and qualify their predictions. At Book of the Future we have created our own approach that we call Intersection, to allow us to make practical predictions and inform the advice we give to clients. Specifically it is designed to help us understand and demonstrate how macro trends, related to or driven by technology, will impact on the specific sectors our clients are working within. 3D Lens. Set Design / Art Direction — Andrew Stellitano / Design & Art Direction. The Odyssey In collaboration with Ryan Hopkinson, Adam Leary & The Forge we set out to create a series of images that would forge awe-inspiring nature with the refinement of modern interior design. 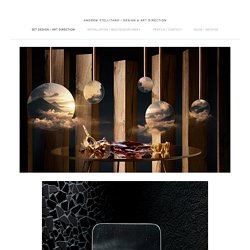 Key visual cues were taken from the paintings of John Martin, Constable and Friedrich as reference to the landscapes, interior tones and lighting. Barneys CEO Mark Lee - Dirk Standen Interview - The Future of Shopping - Style.com. Mark Lee is a cool customer. 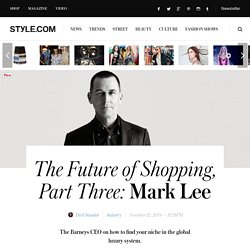 LSN : Seed : After hours: New York fashion label presents interactive night-time show. LSN : Seed : Pick and mix: Music video where viewers can pick the outfits. Rosetta mission: Philae goes to sleep on comet as batteries run out. The Philae lander sitting on Comet 67P/Churyumov–Gerasimenko has run out of power after a successful last-ditch attempt to nudge it into better sunlight apparently came too late to charge its batteries and keep systems up and running. 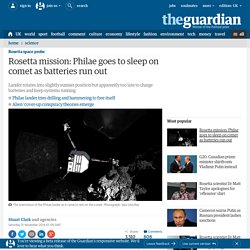 Mission controllers for the Rosetta mission had said on Friday that they were preparing to “hop” the robotic probe in a hope it would settle in a sunnier spot on the comet’s surface. Later came a promising announcement. “My rotation was successful (35 degrees). Looks like a whole new comet from this angle,” read a message posted on the lander’s official Twitter account. Earlier the scientists tweeted: “First comet drilling is a fact!” But afterwards the Philae mission tweeted: — Philae Lander (@Philae2014)November 15, 2014. Philae had apparently been successful in shifting position to gives its shaded solar panels a better chance of catching sunlight.

If the batteries are not charged the lander goes into hibernation. LSN : Seed : Distillation station: Device that turns Coca-Cola into water.