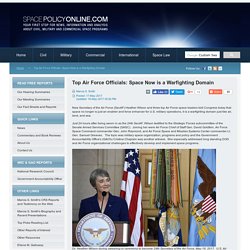 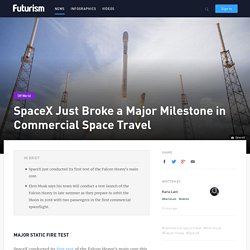 Elon Musk says his team will conduct a test launch of the Falcon Heavy in late summer as they prepare to orbit the Moon in 2018 with two passengers in the first commercial spaceflight. Major Static Fire Test SpaceX conducted its first test of the Falcon Heavy’s main core this week, with a successful result. SpaceX took to Twitter to release the video of the event. While the original plan was to have everything operational for carrying space travelers and cargo into orbit by 2013, the latest incarnation of the plan calls for a launch in late summer of 2017. Take Off? It’s possible that SpaceX CEO Elon Musk and his team are waiting to see how much progress they make between now and then — or that they just can’t decide yet. We May Have Uncovered the First Ever Evidence of the Multiverse. In Brief A recent study on a space anomaly that has perplexed scientists for years has some suggesting that it could be explained by a parallel "bubble universe" — although there are other, more standard potential explanations, as well. 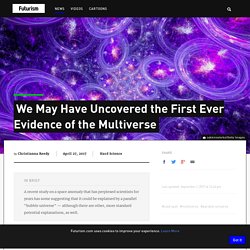 Too Cold For years, scientists have been baffled by a weird anomaly far away in space: a mysterious “Cold Spot” about 1.8 billion light-years across. It is cooler than its surroundings by around 0.00015 degrees Celsius (0.00027 degrees Fahrenheit), a fact astronomers discovered by measuring background radiation throughout the universe.

NASA Finds ‘Iceball’ Planet. NASA scientists have found a new planet that may add to the understanding of the types of planetary systems that exist beyond the solar system. 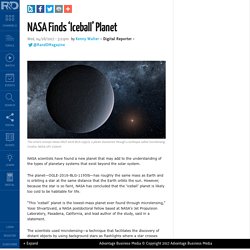 The planet—OGLE-2016-BLG-1195lb—has roughly the same mass as Earth and is orbiting a star at the same distance that the Earth orbits the sun. However, because the star is so faint, NASA has concluded that the ‘iceball’ planet is likely too cold to be habitable for life. “This 'iceball' planet is the lowest-mass planet ever found through microlensing,” Yossi Shvartzvald, a NASA postdoctoral fellow based at NASA's Jet Propulsion Laboratory, Pasadena, California, and lead author of the study, said in a statement. We Just Entered a New Age in Space. Here's Proof. A New Frontier In previous decades, governments and national entities were the ones leading humanity’s charge into space. 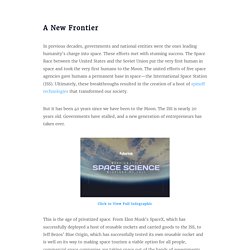 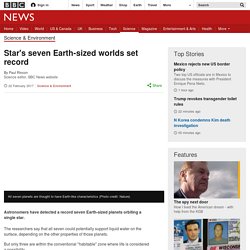 The researchers say that all seven could potentially support liquid water on the surface, depending on the other properties of those planets. But only three are within the conventional "habitable" zone where life is considered a possibility. The compact system of exoplanets orbits Trappist-1, a low-mass, cool star located 40 light-years away from Earth. A Real Life "Hibernation Chamber" is Being Made For Deep Space Travel. Therapeutic Hypothermia Manned, long-term, deep space missions are an exciting prospect, but one that remains in the realm of distant possibilities–particularly because we don’t have all the technological innovations needed to make it happen. 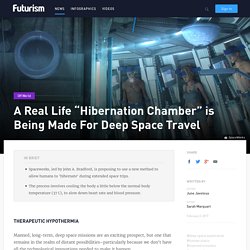 One major consideration is the time it takes to reach the destination. Mars, which is at the top of various space programs’ go-to destinations for manned missions, is about six months if travel time away from Earth. If we wanted to explore even further, keep in mind that New Horizons, the fastest spacecraft to leave Earth, took nine and a half years to reach Pluto. Science fiction conveniently sidesteps this challenge by putting the space explorers into deep sleep–a state of suspended animation. Spaceworks however, led by John A.

Living in Space Proven to Transform Humans on a Genetic Level. Space Twins Heading into space is certainly a life-changing experience for each of the lucky astronauts who have had the privilege. 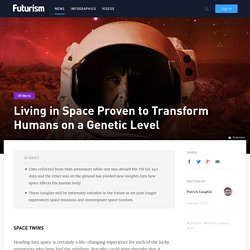 But who could have thought that it actually changes you on a genetic level? Thanks to a pair of twin astronauts, NASA has been able to study the changes to the bodies of those who spend long periods of time in space to a degree that wouldn’t otherwise be possible. To determine how space changes the human body, researchers collected a variety of biological samples from twins Mark and Scott Kelley while Scott was spending 340 days aboard the International Space Station and Mark was left on the ground.

The twins were excellent subjects for this kind of research as not only do they have nearly identical genomes, they have also had similar life experiences since they’re even in the same line of work. In evaluating the brothers’ data, the researchers noticed some striking differences in various biological markers, such as gut bacteria and even chromosomes. Our Universe Has Trillions of Galaxies, Hubble Study. Why Elon Musk's Mars Vision Needs 'Some Real Imagination' When Elon Musk introduced earthlings last month to his vision for cities on Mars, his 90-minute remarks fired up imaginations everywhere—except on Mars. 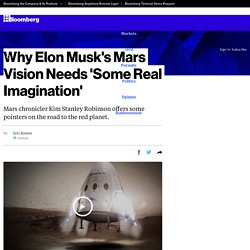 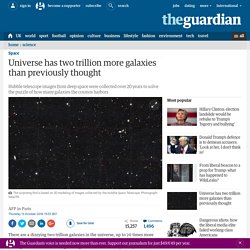 The surprising finding, based on 3D modeling of images collected over 20 years by the Hubble Space Telescope, was published in the Astronomical Journal. Scientists have puzzled over how many galaxies the cosmos harbors at least since US astronomer Edwin Hubble showed in 1924 that Andromeda, a neighboring galaxy, was not part of our own Milky Way. But even in the era of modern astronomy, getting an accurate tally has proven difficult. Parting Shots: Rosetta's Last Views of Comet 67P. DARMSTADT, Germany — Before ending operations, Rosetta stared down her final resting place. The European Space Agency (ESA) released the last images that its Rosetta spacecraft captured before making a death dive into Comet 67P/Churyumov-Gerasimenko Friday (Sept. 30). "That's the end of Rosetta," said Holger Sierks, the principal investigator for Rosetta's OSIRIS camera, as he showed reporters here at the European Space Operations Centre the final image snapped from an estimated altitude of about 65 feet (20 meters).

[See all of Rosetta's last photos of Comet 67P] The view is slightly blurry — Sierks said his team still has to sharpen the images — but the gravelly surface of the comet is clearly visible. The scale of the image is about 5 mm/pixel (0.2 inches/pixel), and it measures about 7.6 feet (2.4 m) across, according to ESA. Rosetta, which had been orbiting Comet 67P for the last two years, was not designed to survive a landing. Gizmodo. Explicit cookie consent. “I’D LIKE to die on Mars. X's Elon Musk Unveils Interplanetary Spaceship to Colonize Mars.

Now we know how Elon Musk plans to get 1 million people to Mars. At a conference in Mexico today (Sept. 27), the SpaceX founder and CEO unveiled the company's Interplanetary Transport System (ITS), which will combine the most powerful rocket ever built with a spaceship designed to carry at least 100 people to the Red Planet per flight. If all goes according to plan, the reusable ITS will help humanity establish a permanent, self-sustaining colony on the Red Planet within the next 50 to 100 years, Musk said at the International Astronautical Congress in Guadalajara. Path to Mars Should Be Flexible, Experts Agree. LONG BEACH, Calif. — "How many of you want to go to Mars? " was the question posed to the large group of assembled engineers, scientists and other space professionals at a major aerospace event last week. Most hands in the audience shot up. The speaker was Bill Gerstenmaier, associate administrator for the Human Exploration and Operations Directorate at NASA Headquarters, and the meaning of his question was clear: People like Mars as an objective, and the human exploration of Mars is NASA's long-term goal. [5 Manned Mission to Mars Ideas] "We're building an approach that will allow humanity to move into the solar system, and Mars is the first destination," Gerstenmaier said.

Living on the Red Planet: NASA Astronauts Emerge From Year-Long Mars Simulation. In Brief The longest-running NASA experiment (HI-SEAS) of its kind designed to simulate living conditions on Mars has come to an end, with six volunteers emerging from a year-long stay in a dome in Mauna Loa, Hawaii. Living Under No Simple Circumstances For an entire year, the Hawaii Space Exploration Analog and Simulation (HI-SEAS) six-person crew, had to live under a small, (366) square-meter (1,200 square-foot), two-story, dome, located on the barren slopes of Mauna Loa, to simulate Mars’ natural environment—with its rocky and sparse terrain sharing a huge similarity to the Red Planet.

Funded by NASA, this experiment tested how a group of strangers would cope with the extreme, and long-term isolation that astronauts would undoubtedly endure during an actual, and real-life Mars mission—having several restrictions such as only being able to leave if they have a spacesuit on; and only being able to eat either canned or powdered food. Future of HI-SEAS. SETI has observed a “strong” signal that may originate from a Sun-like star. It remains only the barest of probabilities that astronomers have just found evidence of extraterrestrial, intelligent life.

"Earth-Like" Exoplanet Discovered In The Nearest Star System To Our Own. In the search for exoplanets, among all the “Hot Jupiters” and two-faced hellish domains, scientists hope more than anything to find Earth-like worlds, ones that may hold life. Gizmodo. The Edge Of The Universe Is Closer Than Scientists Previously Thought.

The visible universe just shrunk by 320 million light-years in all directions, updating a famous calculation that physicists first made 13 years ago. Scientists simulating Mars mission on Hawaii long for end to year in isolation. Mars' Ancient Lakes: Further Proof The Red Planet Once Had Water. Moon Express: The US Government Just Gave A Private Company Permission To Land on the Moon. Martians Might Be Real. That Makes Mars Exploration Way More Complicated. Moon Express approved for first private moon landing — Quartz. SpaceX sends cargo to the International Space Station, nails the landing. Early Monday morning, SpaceX achieved a successful launch and landing of its Falcon main stage, which sent a Dragon capsule loaded with supplies to the International Space Station.

SpaceX sends cargo to the International Space Station, nails the landing. $1 billion Magnetospheric Multiscale Mission directly measuring interface of Earth's magnetic field with interplanetary field. For the first time, scientists are looking at real data -- not computer models, but direct observation -- about what is happening in the fascinating region where the Earth's magnetic field breaks and then joins with the interplanetary magnetic field. They don't know exactly what this new window of science will open to us -- that's the thrill of discovery and, for some, the scary part, too. But enormous amounts of data now are arriving daily -- and publicly accessible -- from NASA's $1 billion Magnetospheric Multiscale Mission, called MMS for short, which was launched in March 2015.

Uk.businessinsider. Mars Needs Colonists Who Eat Meat And Sleep Late. Hawking: Humans at risk of lethal 'own goal' SpaceX Releases Photos of Its Undamaged Falcon 9. SpaceX Successfully Completes a Vertical Landing at Cape Canaveral. These Are the Most Bad-Ass Photos from the SpaceX Rocket Landing. NASA plans to 'move out' of the ISS on its way to the Moon. Earth surrounded by dense, hairy filaments of dark matter. Hubble Spots Biggest Sample of Faint, Early Galaxies (Photos) Earth Bloomed Early: A Fermi Paradox Solution? The International Space Station is home to potentially dangerous bacteria.