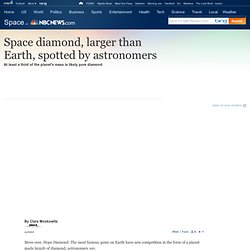 The most famous gems on Earth have new competition in the form of a planet made largely of diamond, astronomers say. The alien planet, a so-called "super-Earth," is called 55 Cancri e and was discovered in 2004 around a nearby star in our Milky Way galaxy. After estimating the planet's mass and radius, and studying its host star's composition, scientists now say the rocky world is composed mainly of carbon (in the form of diamond and graphite), as well as iron, silicon carbide, and potentially silicates.

At least a third of the planet's mass is likely pure diamond. "This is our first glimpse of a rocky world with a fundamentally different chemistry from Earth," lead researcher Nikku Madhusudhan of Yale University said in a statement. 55 Cancri e is the first likely "diamond planet" to be identified around a sun-like star, though such worlds have been theorized before. Last flight of the Space Shuttle: a 30-year retrospective. The United States has been a space-faring nation for just over 50 years, ever since Alan Shepard's suborbital pop shot aboard Freedom 7 on May 5, 1961. 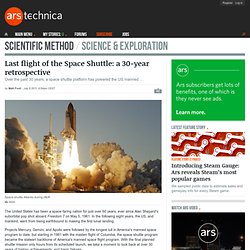 Space shuttle era ends with Atlantis. The History of the Space Shuttle - Alan Taylor - In Focus. From its first launch 30 years ago to its final mission scheduled for next Friday, NASA's Space Shuttle program has seen moments of dizzying inspiration and of crushing disappointment. 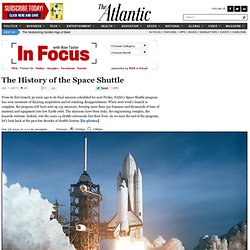 When next week's launch is complete, the program will have sent up 135 missions, ferrying more than 350 humans and thousands of tons of material and equipment into low Earth orbit. The Space Shuttle. Since 1981, NASA space shuttles have been rocketing from the Florida coast into Earth orbit. 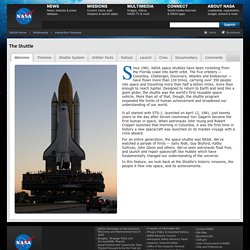 The five orbiters — Columbia, Challenger, Discovery, Atlantis and Endeavour — have flown more than 130 times, carrying over 350 people into space and travelling more than half a billion miles, more than enough to reach Jupiter. List of space shuttle missions. This is a list in table format of all launched between 1981 and 2011. 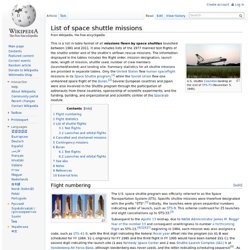 It also includes lists of the 1977 manned test flights of the shuttle orbiter and of the shuttle's unflown rescue missions. The information displayed in the tables includes the flight order, mission designation, launch date, length of mission, shuttle used, number of crew members (launched/landed) and landing site. Summary statistics for all shuttle missions are provided in separate tables. Only the United States flew human spaceflight missions in its Space Shuttle program , [ 1 ] while the Soviet Union flew one unmanned space flight of the . [ 2 ] Several European countries and Japan were also involved in the Shuttle program through the participation of astronauts from those countries, sponsorship of scientific experiments, and the funding, building, and organizational and scientific control of the Spacelab module. [ edit ] Flight numbering Subsequent to the Apollo 13 mishap, due to NASA Administrator James M. 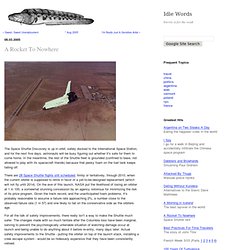 In the meantime, the rest of the Shuttle fleet is grounded (confined to base, not allowed to play with its spacecraft friends) because that pesky foam on the fuel tank keeps falling off. There are 28 Space Shuttle flights still scheduled, firmly or tentatively, through 2010, when the current orbiter is supposed to retire in favor of a yet-to-be-designed replacement (which will not fly until 2014). On the eve of this launch, NASA put the likelihood of losing an orbiter at 1 in 100, a somewhat stunning concession by an agency notorious for minimizing the risk of its prize program. For all the talk of safety improvements, there really isn't a way to make the Shuttle much safer.

The Air Force was only too happy to agree, but at a crippling price. Space.