Mars One announces Request for Proposals for 2018 Mars lander payloads - Press Releases - News. Asteroid Database and Mining Rankings - Asterank. Spacecraft built from graphene could run on nothing but sunlight - space - 28 May 2015. GRAPHENE to the stars. 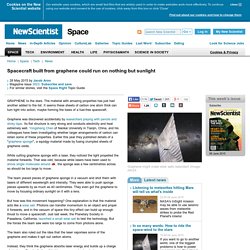 The material with amazing properties has just had another added to the list. It seems these sheets of carbon one atom thick can turn light into action, maybe forming the basis of a fuel-free spacecraft. Graphene was discovered accidentally by researchers playing with pencils and sticky tape. Its flat structure is very strong and conducts electricity and heat extremely well. Yongsheng Chen of Nankai University in Tianjin, China, and his colleagues have been investigating whether larger arrangements of carbon can retain some of these properties. While cutting graphene sponge with a laser, they noticed the light propelled the material forwards. . , the sponge was a few centimetres across so should be too large to move. A Stagecoach to the Stars. Imagine the kind of spaceship we’ll need as we begin to expand the human presence into the nearby Solar System. 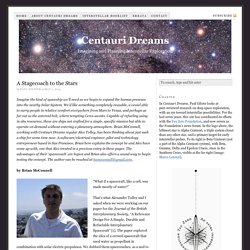 We’d like something completely reusable, a vessel able to carry people in relative comfort everywhere from Mars to Venus, and perhaps as far out as the asteroid belt, where tempting Ceres awaits. Capable of refueling using in situ resources, these are ships not crafted for a single, specific mission but able to operate on demand without entering a planetary atmosphere. Brian McConnell, working with Centauri Dreams regular Alex Tolley, has been thinking about just such a ship for some time now. It’s time to look for life in Europa’s ocean – Lee Billings. The robots come to Mars out of a sky tinged peach from whirlwind-lofted dust. 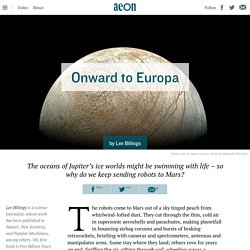 They cut through the thin, cold air in supersonic aeroshells and parachutes, making planetfall in bouncing airbag cocoons and bursts of braking retrorockets, bristling with cameras and spectrometers, antennas and manipulator arms. Some stay where they land; others rove for years on end. Can life exist on a planet without a star? – Sean Raymond. It’s 10,000 years in the future. 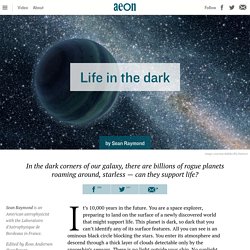 You are a space explorer, preparing to land on the surface of a newly discovered world that might support life. This planet is dark, so dark that you can’t identify any of its surface features. Why Jupiter’s Great Red Spot Refuses to Die. It’s always a mistake to read,” Philip Marcus, a computational physicist and a professor in the mechanical engineering department at the University of California, Berkeley, tells me in a coffee shop near campus. 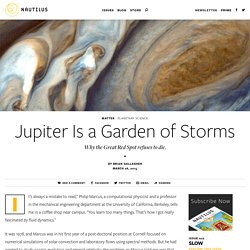 “You learn too many things. That’s how I got really fascinated by fluid dynamics.” It was 1978, and Marcus was in his first year of a post-doctoral position at Cornell focused on numerical simulations of solar convection and laboratory flows using spectral methods. But he had wanted to study cosmic evolution and general relativity; the problem, as Marcus told me, was that there was talk of no one seeing results of general relativity within their lifetime.

As a result, “the field kind of collapsed on itself a little bit, and so everybody from general relativity was going to other fields.” Planets in the Fourth Dimension. You probably that planets go around the sun in elliptical orbits. 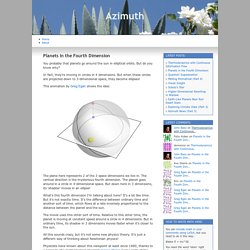 But do you know why? In fact, they’re moving in circles in 4 dimensions. But when these circles are projected down to 3-dimensional space, they become ellipses! This animation by Greg Egan shows the idea: The plane here represents 2 of the 3 space dimensions we live in. The Future of Space Launch is Near. Why Explore Space? A 1970 Letter to a Nun in Africa. Ernst Stuhlinger (1913-2008) Ernst Stuhlinger wrote this letter on May 6, 1970, to Sister Mary Jucunda, a nun who worked among the starving children of Kabwe, Zambia, in Africa, who questioned the value of space exploration. At the time Dr. Stuhlinger was Associate Director for Science at the Marshall Space Flight Center, in Huntsville, Alabama. 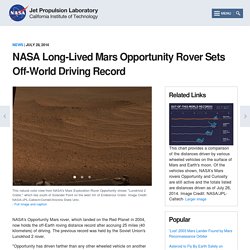 The previous record was held by the Soviet Union's Lunokhod 2 rover. "Opportunity has driven farther than any other wheeled vehicle on another world," said Mars Exploration Rover Project Manager John Callas, of NASA's Jet Propulsion Laboratory in Pasadena, California. "This is so remarkable considering Opportunity was intended to drive about one kilometer and was never designed for distance. But what is really important is not how many miles the rover has racked up, but how much exploration and discovery we have accomplished over that distance. " A drive of 157 feet (48 meters) on July 27 put Opportunity's total odometry at 25.01 miles (40.25 kilometers). Going up! Space elevator may ride on diamonds.

A Japanese construction company, Obayashi Corporation, has been investigating the concept for a space elevator. 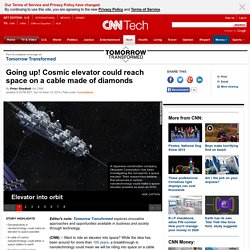 Their researchers believe that advances in carbon nanotechnology could make a space elevator possible as soon as 2030. The concept for an elevator into space is almost 120 years old and was first published by the Russian father of modern rocketry Konstantin Tsiolkovsky in 1895. Elon Musk’s Next Mission: Internet Satellites - WSJ. This Is What Your 3D-Printed Moon Home Will Look Like. Video: Foster + Partners This is what your future Moon home will look like. 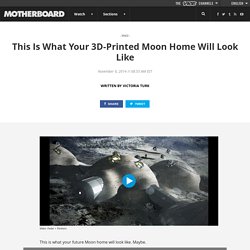 Maybe. The European Space Agency (ESA) just released this video of UK architect company Foster + Partners’ concept for a 3D-printed lunar base. After a dramatic rocket launch, let the soothing voiceover take you on a tour of your four-person protective dome, as if it’s as simple as moving next door. How to Avoid the Desperate Future of “Interstellar” This NASA Scientist Wants to Colonize Venus with Floating Sky Cities. NASA’s recent $6.8-billion concession to Boeing and SpaceX for the privilege of transporting supplies and personnel to the International Space Station has infected Americans with a ‘space fever’ once again, in addition to dispelling any doubt as to the future of the private sector in space. 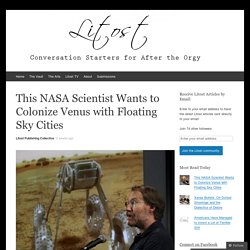 While congress continues to annually cut NASA’s slice of the federal budget, the nascent space exploration industry has largely picked up the slack, with companies such as Deep Space Industries and Planetary Resources training their sights on the wealth of precious metals harbored by asteroids, while other private entities such as Mars One forecast having boots on the red planet within a decade. Capitalism has at long last gone to space and it has certainly allowed for the exploration and colonization of the final frontier to proceed at unprecedented levels (thanks, Elon Musk). Geoffrey A. S Orion Spacecraft Complete; Media Invited to Learn More about Its First Flight. [image-69]NASA’s new Orion spacecraft received finishing touches Thursday, marking the conclusion of construction on the first spacecraft designed to send humans into deep space beyond the moon, including a journey to Mars that begins with its first test flight Dec. 4.

To provide more detail on what this first flight entails, NASA will host a preflight briefing at 11 a.m. EST Nov. 6 at the agency’s Kennedy Space Center in Florida. The news conference will be broadcast live on NASA TV and on the agency’s website. Throwback Thursday: Most Planets in the Universe are Homeless — Starts With A Bang! “You cannot be lonely if you like the person you’re alone with.” -Wayne Dyer It’s really a romantic notion when you think about it: the heavens, the Milky Way, is lined with hundreds of billions of stars, each with their own unique and varied stories of birth and history.

Some of them are massive and bright, some are smaller and dim; some were born only a few million years ago, others are nearly as old as the Universe themselves. But there is one thing that practically all of them are expected to have in common: solar systems. But beyond that — in addition to the stars and all the bodies that orbit them — there are a huge number of planets with no central stars at all: the rogue planets of our galaxy. We think this is true everywhere in the Universe, from small star clusters to interstellar space to the cores of giant galaxies.

Human spaceflight: Find asteroids to get to Mars. Detlev van Ravenswaay/SPL At least one roughly 10-metre-wide asteroid passes as close as the Moon each week (artist's impression). Interplanetary flight is the next giant leap for humans in space. What It Took for SpaceX to Become a Serious Space Company. It simply needed to disrupt Boeing and leapfrog NASA.

SpaceX The Space Exploration Technology rocket factory is a large, white hangar-like building near Los Angeles international airport, with a parking lot filled with late-model motorcycles and Tesla electric cars. The vast metal structure once churned out 737 fuselages for Boeing. When you get through the front doors, past security and a cubicle farm stretching the width of the building, there it is: Science fiction being wrought into shape, right in front of you. Right in front of all the workers, too. Visitors can’t snap pictures—the technology is considered sensitive to national security. Last month, NASA said it would pay SpaceX its largest single contract ever, $2.6 billion, to shuttle U.S. astronauts up to the International Space Station (ISS). How to design a space rocket – Step 1/3. Dreaming a Different Apollo. The strange contagion of a dream.

Boeing Unveils Cabin Design for Commercial Spaceliner (Images) Milky Way amidst a ‘Council of Giants’ SpaceX advances drive for Mars rocket via Raptor power. Orbital airship. NASA’s Kepler telescope doubles number of known planets outside solar system. The Lost Art of the Saturn V. When did America become too afraid to explore a frontier? Starship Radiators. The Anatomy of an Asteroid. Mars Curiosity Rover Tracker - Interactive Feature. Where is Rosetta?