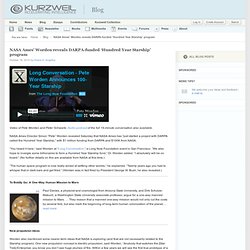 Worden added. “The human space program is now really aimed at settling other worlds,” he explained. At 6.6 Billion Suns, The Largest Black Hole Ever Measured Could Swallow Our Solar System. A universal heavyweight champion was crowned this morning at the 217th meeting of the American Astronomical Society in Seattle: A giant black hole weighing a staggering 6.6 billion suns accepted the title of the most massive black hole for which a precise mass has been determined. 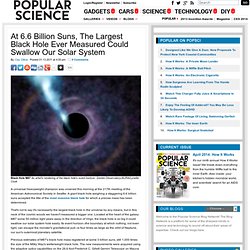 Huge Black Hole Found in Dwarf Galaxy. A supermassive black hole discovered inside a nearby dwarf galaxy may help explain how galaxies grew in the early universe. 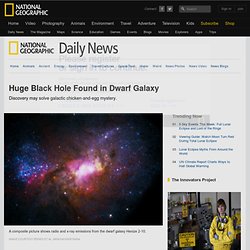 At its center, nearly every large galaxy contains a supermassive black hole surrounded by a big bulge of stars. But whether the black hole or the bulge formed first has long been a chicken-and-egg question in astronomy. (Related: "'Hidden' Black Holes Discovered in Distant Galaxies. ") New x-ray and radio observations of the dwarf galaxy Henize 2-10 show that, while the tiny galaxy lacks a bulge, it very likely contains a supermassive black hole—one about a quarter as large as the black hole at the center of our Milky Way.

Henize 2-10 is small and irregularly shaped, and it's actively forming stars, which means it's very similar to early galaxies, researchers say. Hidden in Plain Sight: Researchers Find Galaxy-Scale Bubbles Extending from the Milky Way. A group of astrophysicists has located two massive bubbles of plasma, each extending tens of thousands of light-years, emitting high-energy radiation above and below the plane of the galaxy. The researchers found the structures in publicly released data from NASA's Fermi Gamma-Ray Space Telescope, which was launched in 2008 to investigate sources of extremely energetic photons—namely, gamma rays, which have higher frequencies than x-rays. Latest From Mars: Frosty Landscapes, Ancient Lakebed, Potential Landing Site. Want to stay on top of all the space news? 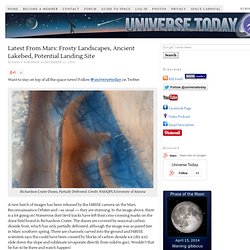 Follow @universetoday on Twitter Richardson Crater Dunes, Partially Defrosted. Credit: NASA/JPL/University of Arizona. A Huge Ocean Likely Covered More Than a Third of Mars 3.5 Billio. It took NASA a few decades, several probes, and a whole lot of money to find hard evidence for the existence of water on the surface of Mars. Symphony of Science - 'The Case for Mars' (ft. Zubrin, Sagan, Co. 'Colonizing the Red Planet,' a How-To Guide. Do Seasonal Changes in Mars's Atmosphere Have a Biological Cause? Methane concentrations on Mars change with the seasons as well as location, and the gas disappears within a Martian year, according to a new study by Italian scientists. 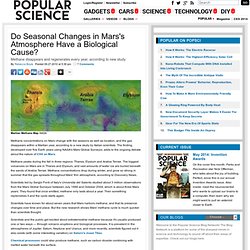 The finding, developed over five Earth years using NASA's Mars Global Surveyor, adds to the ongoing debate about the nature of CH4 on Mars. Methane peaks during the fall in three regions: Tharsis, Elysium and Arabia Terrae. The biggest volcanoes on Mars are in Tharsis and Elysium, and vast amounts of water ice are buried beneath the sands of Arabia Terrae. Methane concentrations drop during winter, and grow so strong in summer that the gas spreads throughout Mars' thin atmosphere, according to Discovery News. Super-Earth Atmosphere May Be Mostly Water. Mars Has Liquid Water Close to Surface, Study Hints.

Pools of liquid water may even now exist just a few meters below the Martian surface, according to new research. 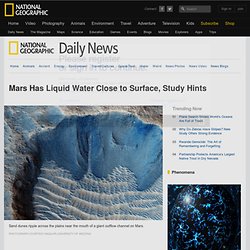 The finding hints that humans may one day be able to tap into Mars's watery bounty. Although the surface of Mars is too frigid for liquid water to be stable, pockets of water underground could be kept warm enough by an insulating blanket of porous sediment, an international team writes in the November issue of the journal Icarus. (Related: "Liquid Water Recently Seen on Mars? ") Pluto Has Oceans Under Ice? Frigid Pluto, home to some of our solar system's chilliest real estate, may well harbor an ocean beneath its miles-thick ice shell, new research suggests. 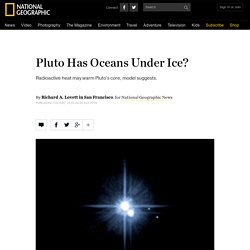 Despite its extreme cold, the dwarf planet still appears to be warm enough to "easily" have a subsurface ocean, according to a new model of the rate at which radioactive heat might still warm Pluto's core. And that ocean wouldn't be a mere puddle, noted planetary scientist Guillaume Robuchon of the University of California, Santa Cruz. Rather, the ocean could be 60 to 105 miles (100 to 170 kilometers) thick beneath a 120-mile (200-kilometer) layer of ice, Robuchon said at an annual meeting of the American Geophysical Union in San Francisco earlier this week.

If so, Pluto would join a list of outer solar system bodies—such as Saturn's moons Titan and Enceladus—believed to possibly hold liquid water, a key ingredient for life as we know it. (See "Saturn Moon Has Ice Volcano—And Maybe Life? " Odds of Finding Earth-Size Exoplanets Are 1-in-4. Nearly one in four sun-like stars should host an Earth-mass planet, according to a new census. 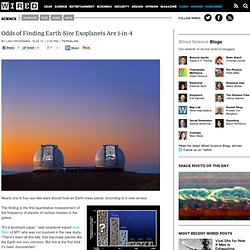 The finding is the first quantitative measurement of the frequency of planets of various masses in the galaxy. “It’s a landmark paper,” said exoplanet expert Josh Winn of MIT, who was not involved in the new study. “There’s been all this talk, that low-mass planets like the Earth are very common. But this is the first time it’s been documented.” The study, published in the Oct. 29 Science, also found plenty of planets in a mass range that astronomers expected to be empty, which may prompt an overhaul of planet-formation models. Kepler Finds First Definitevely Rocky Exoplanet. SEATTLE — The planet-hunting Kepler Space Telescope has spotted its first rocky exoplanet, astronomers announced today at the meeting of the American Astronomical Society. 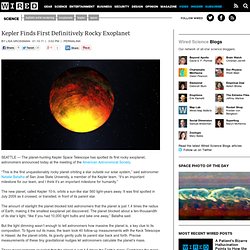 “This is the first unquestionably rocky planet orbiting a star outside our solar system,” said astronomer Natalie Batalha of San Jose State University, a member of the Kepler team. “It’s an important milestone for our team, and I think it’s an important milestone for humanity.” The new planet, called Kepler 10-b, orbits a sun-like star 560 light-years away. It was first spotted in July 2009 as it crossed, or transited, in front of its parent star. First Volcano Sighting on Saturn’s Most Earthlike Moon. SAN FRANCISCO — Three icy volcanoes line up on Saturn’s moon Titan, giving some of the best evidence yet that explosive eruptions are possible on worlds beyond Earth. 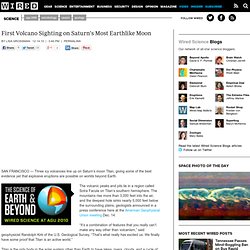 The volcanic peaks and pits lie in a region called Sotra Facula on Titan’s southern hemisphere. The mountains rise more than 3,000 feet into the air, and the deepest hole sinks nearly 5,000 feet below the surrounding plains, geologists announced in a press conference here at the American Geophysical Union meeting Dec. 14.

“It’s a combination of features that you really can’t make any way other than volcanism,” said geophysicist Randolph Kirk of the U.S. Geological Survey. “That’s what really has excited us: We finally have some proof that Titan is an active world.” In Flyby of Saturn's Moon Rhea, Cassini Probe Gets First Whiff of Non-Earthly Oxygen. NASA's Cassini spacecraft has taken a breath of oxygen while passing over the icy surface of Saturn's second-largest moon, marking the first time a spacecraft has directly sampled oxygen in the atmosphere of another body.

Cruising just 60 miles above Rhea, one of more than 60 moons orbiting Saturn, Cassini found an extremely thin atmosphere of oxygen and carbon dioxide likely sustained by high-energy particles slamming into the moon's frozen surface. Rhea's isn't the only other atmosphere in the universe, but it is so thin that Cassini had to fly through it just to confirm that it was there at all (other atmosphere's have been detected and studied from afar by tools like the Hubble Space Telescope).

For one thing, the 932-mile-wide (1,500-kilometer-wide), ice-covered moon is more than 932 million miles (1.5 billion kilometers) from Earth. For another, the average surface temperature is -292 degrees Fahrenheit (-180 degrees Celsius). And at less than 62 miles (100 kilometers) thick, the newfound oxygen layer is so thin that, at Earthlike temperatures and pressure, Rhea's entire atmosphere would fit in a single midsize building. Still, the discovery implies that worlds with oxygen-filled air may not be so unusual in the cosmos. (Related: "Potentially Habitable Planets Are Common, Study Says. ") At about 327,000 miles (527,000 kilometers) from Saturn, Rhea orbits inside the planet's magnetic field. Smog on Titan Moon May Hold Ingredients For Life, New Study Says. New Evidence of a Fluid Sea on Saturn’s Moon Titan. "Supernova in a Jar" Offers Peek Inside Star Death. Previously Unseen Super-Hot Plasma Jets Heat the Sun’s Corona. Space Circles Are Proof of a Pre-Big Bang Universe?

Radiation Rings Hint Universe Was Recycled Over and Over. Most cosmologists trace the birth of the universe to the Big Bang 13.7 billion years ago. The End of Time is Nigh (in a Cosmic Sense, Anyhow) The universe has only about 3.7 billion years in which to settle its affairs. At least, that's the new assertion from a group of physicists who say that there is a 50 percent chance that time will end within that time frame. If the laws of physics as we understand them are in fact correct, then time must eventually end – and their math shows that both the sun and the Earth should still be around when that happens.

Video: Spaceport America Inaugurated By Virgin Galactic’s VSS Enterprise. Among the many things about living in the year 2010 that blow my mind (robot vacuums, smartphones, Google Books), the fact that we are at the beginning of commercial space flight is, incredibly, not constantly on my mind. Yet advances are constantly being made, most visibly by Virgin Galactic, which just this last week inaugurated the commercial facility for vertically- and horizontally-launching aircraft. I mean spacecraft. The Loneliest Spacecraft in the Universe (soyuz) Dark Jupiter May Haunt Edge of Solar System. A century of comet data suggests a dark, Jupiter-sized object is lurking at the solar system’s outer edge and hurling chunks of ice and dust toward Earth.

The Asteroids Closest to Killing Us, Visualized. This Is the Oldest Space Object Ever Found. Farthest Galaxy Cluster Ever Detected. Captured by NASA’s Chandra X-ray Observatory and combined with data from infrared and optical telescopes, this image shows the farthest galaxy cluster ever detected. Designated JKCS041, the cluster is located 10.2 billion light-years from Earth, beating the previous distance record by a billion light-years. Astronomers think JKCS041 formed just about as early as was feasible. “This object is close to the distance limit expected for a galaxy cluster,” said Stefano Andreon of the National Institute for Astrophysics in Milan, Italy, in a press release. “We don’t think gravity can work fast enough to make galaxy clusters much earlier.” This cluster was first spotted by the United Kingdom Infrared Telescope in 2006, and then by optical telescopes such as the Very Large Telescope in Chile.

Because JKCS041 is so old, it will help scientists understand what was happening at this critical time in the formation of the universe, when it was only about a fourth as old as it is today.