Virgin Galactic. Humans in Outer Space - Interdisciplinary Perspectives. AIAA-2006-7331. Recapturing a Future for Space Exploration: Life and Physical Sciences ... - Committee for the Decadal Survey on Biological and Physical Sciences in Space, National Research Council. More than four decades have passed since a human first set foot on the Moon. 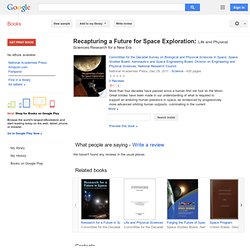 Great strides have been made in our understanding of what is required to support an enduring human presence in space, as evidenced by progressively more advanced orbiting human outposts, culminating in the current International Space Station (ISS). However, of the more than 500 humans who have so far ventured into space, most have gone only as far as near-Earth orbit, and none have traveled beyond the orbit of the Moon. Achieving humans' further progress into the solar system had proved far more difficult than imagined in the heady days of the Apollo missions, but the potential rewards remain substantial. Humans in Outer Space - Interdisciplinary Perspectives. Elon Musk: We Can Put A Man On Mars In 10 Years - Venture Capital Dispatch. Elon Musk Wants to Put Man on Mars in 'Roughly 12 to 15 Years'

<br/><a href=" US News</a> | <a href=" Business News</a> Copy As the Mars rover Curiosity, a $2.5 billion robot the size of a Mini Cooper, touched down last night, one billionaire was already planning the next logical step -- sending humans there. 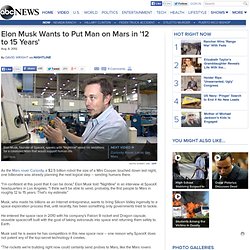 "I'm confident at this point that it can be done," Elon Musk told "Nightline" in an interview at SpaceX headquarters in Los Angeles. Space - International Space Station - (facts, video & pictures) SpaceX and Bigelow sign deal for inflatable space stations in orbit. High performance access to file storage SpaceX has signed a partnership deal with Bigelow Aerospace (BA) to offer a taxi service to and from the inflatable habitats BA intends to put into orbit. 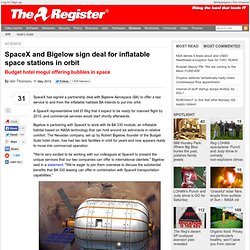 A SpaceX representative told El Reg that it expect to be ready for manned flight by 2015, and commercial services would start shortly afterwards. Bigelow is partnering with SpaceX to work with its BA 330 module, an inflatable habitat based on NASA technology that can hold around six astronauts in relative comfort. The Nevadan company, set up by Robert Bigelow, founder of the Budget Suite hotel chain, has had two test facilities in orbit for years and now appears ready to move into commercial operation.

Bigelow Aerospace. Space hotel: Russia unveils first Commercial Space Station as tourism battle heats up. By Mail Foreign Service Updated: 10:10 GMT, 17 August 2011 If you're tired of the Mediterranean and don't want to head to Disney again, perhaps it's time for a summer holiday in space? 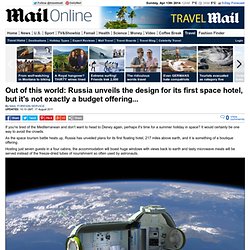 It would certainly be one way to avoid the crowds. As the space tourism battle heats up, Russia has unveiled plans for its first floating hotel, 217 miles above earth, and it is something of a boutique offering. Hosting just seven guests in a four cabins, the accommodation will boast huge windows with views back to earth and tasty microwave meals will be served instead of the freeze-dried tubes of nourishment so often used by astronauts.

Galactic Suite. Industrial Design for Outer Space. Designing for Space: Core77 visits NASA's Industrial Design Team, by Glen Jackson Taylor. Posted by core jr | 31 Oct 2008 | Comments (22) SPR Pressurized Rover Evan Twyford and Carl Conlee are two of three industrial designers working in NASA's Habitability Design Center (HDC), and in just over 2 years they have transitioned the department from one that dealt only with small isolated ergonomic projects to working on arguably the most exciting project at NASA today—a next generation pressurized lunar rover. 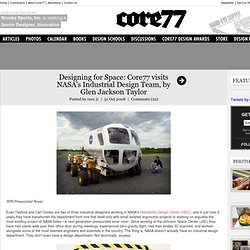 Since working at the Johnson Space Center (JSC) they have had robots walk past their office door during meetings, experienced zero-gravity flight, had their bodies 3D scanned, and worked alongside some of the most talented engineers and scientists in the country. The thing is, NASA doesn't actually have an industrial design department. Part 1: A Day In The Life Onboard The ISS. Life in Space" In addition to using the bathroom regularly, astronauts need to do all of the same things they do on Earth, including eating and sleeping. 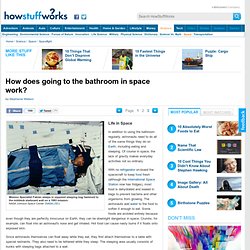 Of course in space, the lack of gravity makes everyday activities not so ordinary. With no refrigerator on-board the spacecraft to keep food fresh (although the International Space Station now has fridges), most food is dehydrated and sealed in bags to prevent bacteria and other organisms from growing. The astronauts add water to the food to soften it enough to eat. Some foods are avoided entirely because even though they are perfectly innocuous on Earth, they can be downright dangerous in space. Crumbs, for example, can float into an astronaut's nose and get inhaled. Astronaut's life: no shower, sleep anywhere, cramped dinner table. With the crew aboard the International Space Station packing up Endeavour for its return flight to Earth, several astronauts reflected on life in zero-G. 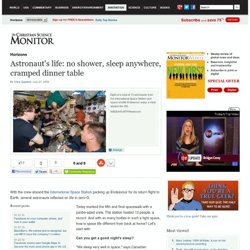 Skip to next paragraph Recent posts Subscribe Today to the Monitor Click Here for your FREE 30 DAYS of The Christian Science Monitor Weekly Digital Edition Today marked the fifth and final spacewalk with a jumbo-sized crew. : Elon Musk, CEO, Space Exploration Technologies. Elon Musk on Mars: "It's a fixer-upper of a planet" (CBS News) On Thursday, NASA announced that first privately run supply mission to the international space station will take off on October 7. 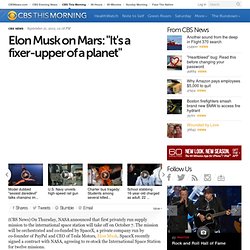 The mission will be orchestrated and co-funded by SpaceX, a private company run by co-founder of PayPal and CEO of Tesla Motors, Elon Musk. SpaceX recently signed a contract with NASA, agreeing to re-stock the International Space Station for twelve missions. And in June, Tesla released its second electric car, the Model S, which sells for $50,000.

Musk has been heralded as both a visionary and an old-school business scion. "Business Week" deemed him a 21st century industrialist and a throwback to John D. Musk, 41, joined "CBS This Morning" to talk about the future of private space exploration, including his long-term goal for SpaceX to "develop the technology necessary to transport large numbers of people and cargo to Mars, ultimately with the goal of establishing a self-sustaining civilization on Mars. " Virgin Galactic cleared for rocket-powered test flights.