Giant Sunspot Unleashes Massive Solar Flare. A powerful solar flare that erupted Thursday (Nov. 3) from a huge blemish on the sun's surface has been classified as an X1.9 flare, ranking it among the most powerful types of storms our star can unleash. 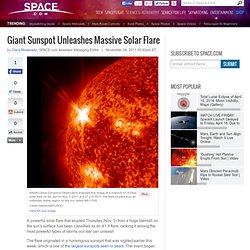 The flare originated in a humongous sunspot that was sighted earlier this week, which is one of the largest sunspots seen in years. The event began at 4:27 p.m. ET (2027 GMT). The flare "triggered some disruption to radio communications on Earth beginning about 45 minutes later," NASA officials wrote in a statement. Watery Alien Planets Might be Stripped Dry by Gravity. Alien planets might experience tidal forces powerful enough to remove all their water, leaving behind hot, dry worlds like Venus, researchers said. 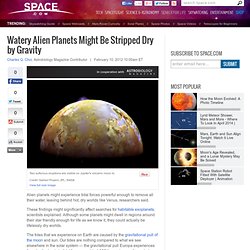 These findings might significantly affect searches for habitable exoplanets, scientists explained. Although some planets might dwell in regions around their star friendly enough for life as we know it, they could actually be lifelessly dry worlds. The tides that we experience on Earth are caused by the gravitational pull of the moon and sun. Alien Life May Depend on Planetary Tilt. Although winter now grips the Northern Hemisphere, those who dislike the cold weather can rest assured that warmer months shall return. 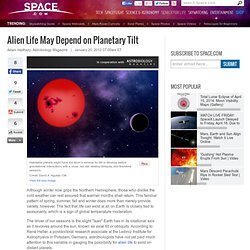 This familiar pattern of spring, summer, fall and winter does more than merely provide variety, however. The fact that life can exist at all on Earth is closely tied to seasonality, which is a sign of global temperature moderation. International Space Station & View of Earth From Space. Ron Garan misses the view from space. The NASA astronaut returned Sept. 16 from a five-and-a-half-month stint on the International Space Station.

Now he's getting his Earth legs back and continuing to work on his website, Fragile Oasis, where he shares words and pictures about the view of Earth from space in hopes of inspiring people to take better care of our planet. Garan recently took time out to talk to SPACE.com about his journey, his website, and possible future spaceflights. [Earth From Space: Amazing Photos by Astronaut Ron Garan] NASA astronaut Ron Garan is all smiles after landing back on Earth aboard a Russian Soyuz TMA-21 spacecraft following a 5 1/2-month mission to the International Space Station. SPACE.com: How have you been adjusting to being back on the ground? Garan: It's been good. Fire Burns Differently in Space, Space Station Experiment Shows.

NASA is playing with fire on the International Space Station — literally. 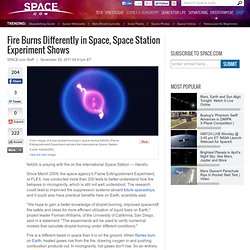 Since March 2009, the space agency's Flame Extinguishment Experiment, or FLEX, has conducted more than 200 tests to better understand how fire behaves in microgravity, which is still not well understood. The research could lead to improved fire suppression systems aboard future spaceships, and it could also have practical benefits here on Earth, scientists said. "We hope to gain a better knowledge of droplet burning, improved spacecraft fire safety and ideas for more efficient utilization of liquid fuels on Earth," project leader Forman Williams, of the University of California, San Diego, said in a statement.

"The experiments will be used to verify numerical models that calculate droplet burning under different conditions. " Fire is a different beast in space than it is on the ground. Space flames can also burn at a lower temperature and with less oxygen than fires on Earth. Could Alien Life Exist in the Methane Habitable Zone? The search for life is largely limited to the search for water. 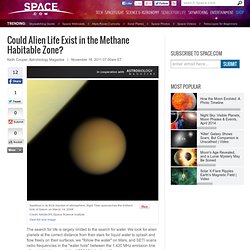 We look for alien planets at the correct distance from their stars for liquid water to splash and flow freely on their surfaces, we "follow the water" on Mars, and SETI scans radio frequencies in the "water hole" between the 1,420 MHz emission line of neutral hydrogen and the 1,666 MHz hydroxyl line. There are two very good reasons why our attention is so strongly focused on water. First, it’s an efficient solvent for biological chemistry, allowing molecules to move around in cells, and it has properties that are friendly to life — a high heat capacity, the ability to remain in liquid form across a wide temperature range and a molecular density that forces molecules to organize themselves, rather than the water organizing around the molecules.

World's Most Complex Radio Telescope Snaps Stunning 1st Photo of the Cosmos. After years of planning, construction and assembly, a gigantic observatory billed as the world's most complex array of ground-based telescopes has opened its eyes in South America and captured its first image. 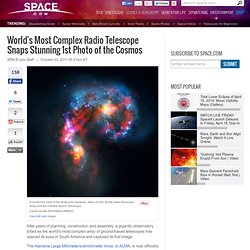 The Atacama Large Millimeter/submillimeter Array, or ALMA, is now officially open for business high in the Chilean Andes. The huge $1.3 billion radio telescope, a collaboration of many nations and institutions, should help astronomers explore some of the coldest and most distant objects in the universe, researchers said. "We went to one of the most extreme locations on Earth to build the world's largest array of millimeter/sub-millimeter telescopes having a level of technical sophistication that was merely a dream only a decade ago," said Mark McKinnon, North American ALMA project manager at the National Radio Astronomy Observatory in Charlottesville, Va., in a statement. "This truly is a great occasion! " Comets Created Earth's Oceans, Study Concludes. The dirty snowballs known as comets might be the sources of Earth's water after all, scientists say. Water is critical to life on Earth — life is found virtually wherever there is water on our planet.

Researchers have spent decades debating where Earth's water and other key ingredients of life came from. Prior studies had suggested that early Earth was dry, lacking water and other so-called volatile materials. Now Earth-like water has been discovered in the small oddball comet Hartley 2, which the Deep Impact/EPOXI spacecraft flew by in November2010. Special Report: The History & Future of the Cosmos. SPECIAL REPORT: Our universe is both ancient and vast, and expanding out farther and faster every day. 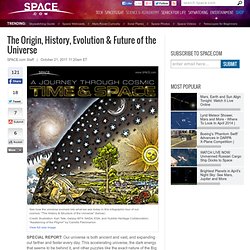 This accelerating universe, the dark energy that seems to be behind it, and other puzzles like the exact nature of the Big Bang and the early evolution of the universe are among the great puzzles of cosmology. There was a time when scientists thought Earth was at the center of the universe. As late as the 1920s, we did not realize that our galaxy was just one of many in a vast universe. A Tale of Two Stars: The Inside Story of Orion's Belt. Standing upright and shining down upon Earth on these midwinter nights is the brightest and grandest of all the constellations: Orion, the Mighty Hunter. 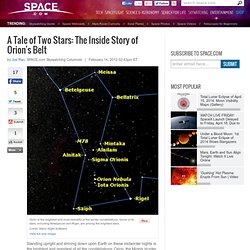 Currently, Orion can be easily seen by skywatchers with clear weather as a star pattern standing high in the southern sky at around 8 p.m. local time. Three bright stars in line in the middle of a bright rectangle decorate Orion's belt, which points northward to the clusters of the Hyades and Pleiades of Taurus, and southward to the Dog Star, Sirius. Above and below the belt, we also find two immense stars, Rigel and Betelgeuse. Rigel (the "Left Leg of the Giant"), is a blue-white supergiant star, one of the rarest breeds in our galaxy.

But with their enormous brilliance — up to 100,000 times as bright as the sun — blue-white supergiants remain conspicuous over great distances. Most Popular Skywatching Misconceptions Explained. With the return of the brilliant planet Venus to our evening sky, I'm reminded of an amusing anecdote related by a good friend of mine, George Lovi, a well-known astronomy lecturer and author who passed away in 1993. 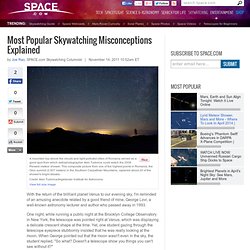 One night, while running a public night at the Brooklyn College Observatory in New York, the telescope was pointed right at Venus, which was displaying a delicate crescent shape at the time. Yet, one student gazing through the telescope eyepiece stubbornly insisted that he was really looking at the moon. When George pointed out that the moon wasn't even in the sky, the student replied, "So what? Doesn't a telescope show you things you can't see without it? " Could Blasts from Cosmic Collisions Destroy Life on Earth? The persistence of life on Earth may depend on massive explosions on the other side of the galaxy, according to a new theory that suggests powerful bursts of space radiation could have played a part in some of our planet's major extinction events.

The explosions — gamma-ray bursts thought to occur when two stars collide — can release tons of high-energy gamma-ray radiation into space. The researchers found that such blasts could be contributing to the depletion of the Earth's ozone layer. NASA's Top 10 Gamma-Ray Sources in the Universe. Gamma-rays are the highest-energy form of light in the universe. 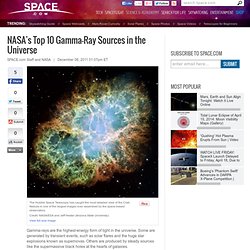 Some are generated by transient events, such as solar flares and the huge star explosions known as supernovas. Others are produced by steady sources like the supermassive black holes at the hearts of galaxies. Solar Magnetic Activity Cycles & Sun Weather. Our sun is apparently a happy star according to the latest video from a NASA observatory. The video shows a pattern of sunspots that, when viewed from afar, forms a vast happy face smiling across face of the sun. Sunspots are darker, cooler patches on the sun caused when intense magnetic activity blocks heat convection. These spots are normal, but they don't usually align to give the sun's face such character. The Search for Alien 'Footprints': Scientist Rethinks Hunt for E.T. Any intelligent extraterrestrial life that exists probably won't announce itself by blowing up the White House, or win over the hearts of children as a lovable alien with a glowing finger.

Many scientists simply hope to find evidence of them by scanning the skies for a radio signal from a distant star's alien civilization. But such efforts may also risk overlooking clues of past alien activity right here on Earth. If aliens did leave their mark on Earth by some wild chance, we could search for the possible "footprints" of alien technology or even analyze the DNA of terrestrial organisms for signs of intelligent messages or tinkering. Such a CSI-style forensics search could complement, rather than replace, the Search for Extra-Terrestrial Intelligence (SETI) astronomers who continue to look skyward, said Paul Davies, a physicist and cosmologist at Arizona State University in Tempe, Ariz.

By Rob Waugh Published: 07:44 GMT, 25 May 2012 | Updated: 09:55 GMT, 25 May 2012. New sunspot group bombards Earth with solar flares - and one blast knocks out radio communications in Europe. Earth-Sun Distance. Scientists discover where the mysterious sounds of the Northern Lights are generated. Solar Eclipses.