How many dimensions are there, and what do they do to reality? Writing away at my desk, I reach my hand up to turn on a lamp, and down to open a drawer to take out a pen. 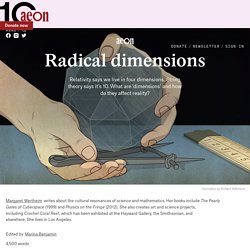 Extending my arm forward, I brush my fingers against a small, strange figurine given to me by my sister as a good-luck charm, while reaching behind I can pat the black cat snuggling into my back. Right leads to the research notes for my article, left to my pile of ‘must-do’ items (bills and correspondence). Up, down, forward, back, right, left: I pilot myself in a personal cosmos of three-dimensional space, the axes of this world invisibly pressed upon me by the rectilinear structure of my office, defined, like most Western architecture, by three conjoining right angles. Our architecture, our education and our dictionaries tell us that space is three-dimensional. The OED defines it as ‘a continuous area or expanse which is free, available or unoccupied … The dimensions of height, depth and width, within which all things exist and move.’

Subscribe to Aeon’s Newsletter. Gravitational Waves Discovered at Long Last. Ripples in space-time caused by the violent mergers of black holes have been detected, 100 years after these “gravitational waves” were predicted by Albert Einstein’s theory of general relativity and half a century after physicists set out to look for them. 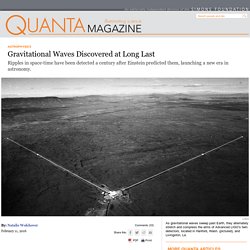 The landmark discovery was reported today by the Advanced Laser Interferometer Gravitational-Wave Observatory (Advanced LIGO) team, confirming months of rumors that have surrounded the group’s analysis of its first round of data. Astrophysicists say the detection of gravitational waves opens up a new window on the universe, revealing faraway events that can’t be seen by optical telescopes, but whose faint tremors can be felt, even heard, across the cosmos.

“We have detected gravitational waves. We did it!” Time Entanglement Raises Quantum Mysteries. In November, construction workers at the Massachusetts Institute of Technology came across a time capsule 942 years too soon. 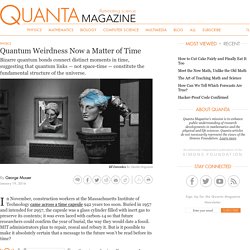 Buried in 1957 and intended for 2957, the capsule was a glass cylinder filled with inert gas to preserve its contents; it was even laced with carbon-14 so that future researchers could confirm the year of burial, the way they would date a fossil. MIT administrators plan to repair, reseal and rebury it. But is it possible to make it absolutely certain that a message to the future won’t be read before its time? Quantum physics offers a way. In 2012, Jay Olson and Timothy Ralph, both physicists at the University of Queensland in Australia, laid out a procedure to encrypt data so that it can be decrypted only at a specific moment in the future.

These correlations seriously mess with our intuitions about time and space. Space-time might not be a God-given backdrop to the world, but instead might derive from the material contents of the universe. Physicists discover new way to visualize warped space-time. When black holes slam into each other, the surrounding space and time surge and undulate like a heaving sea during a storm. 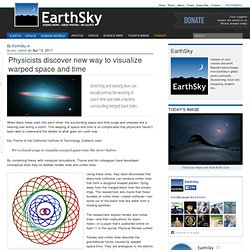 This warping of space and time is so complicated that physicists haven’t been able to understand the details of what goes on—until now. Kip Thorne of the California Institute of Technology (Caltech) said: We’ve found ways to visualize warped space-time like never before. By combining theory with computer simulations, Thorne and his colleagues have developed conceptual tools they’ve dubbed tendex lines and vortex lines. Epic study confirms Einstein on space-time vortex around Earth. Einstein was right: There is a four-dimensional space-time vortex around Earth, and the spin of Earth does twist space-time. That’s according to NASA, in an announcement made 52 years after scientists first imagined how to test Einstein’s theory on space-time – before the technology to test it had even been invented.

NASA announced confirmation of the four-D space-time vortex around Earth on May 4, 2011. What does it mean? As Einstein suggested in his general theory of relativity, published in 1916, gravity can be described as the motion of objects following curved lines in space – or rather space-time , as Einstein more accurately depicted it. The curved lines are caused by the presence of a mass, for example our Earth or sun. Travel INSIDE a Black Hole. Quantum gravity takes singularity out of black holes - space - 29 May 2013. Falling into a black hole may not be as final as it seems. 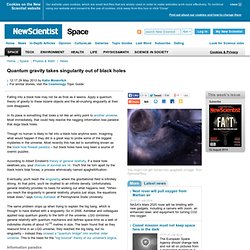 Apply a quantum theory of gravity to these bizarre objects and the all-crushing singularity at their core disappears. In its place is something that looks a lot like an entry point to another universe. Most immediately, that could help resolve the nagging information loss paradox that dogs black holes. Though no human is likely to fall into a black hole anytime soon, imagining what would happen if they did is a great way to probe some of the biggest mysteries in the universe.

Most recently this has led to something known as the black hole firewall paradox – but black holes have long been a source of cosmic puzzles. Every Black Hole Contains Another Universe? According to a mind-bending new theory, a black hole is actually a tunnel between universes—a type of wormhole. 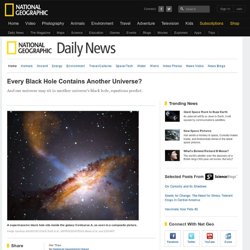 The matter the black hole attracts doesn't collapse into a single point, as has been predicted, but rather gushes out a "white hole" at the other end of the black one, the theory goes. (Related: "New Proof Unknown 'Structures' Tug at Our Universe. " ) In a recent paper published in the journal Indiana University physicist Nikodem Poplawski presents new mathematical models of the spiraling motion of matter falling into a black hole. His equations suggest such wormholes are viable alternatives to the "space-time singularities" that Albert Einstein predicted to be at the centers of black holes.

According to Einstein's equations for general relativity, singularities are created whenever matter in a given region gets too dense, as would happen at the ultradense heart of a black hole. If Poplawski is correct, they may no longer have to. (Related: "Dark Energy's Demise? Astrophysicists on the Verge of Spotting Gravitational Waves. Gravitational waves are ripples in the fabric of spacetime caused by cataclysmic events such as neutron stars colliding and black holes merging. 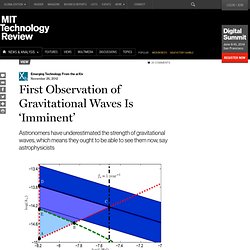 The biggest of these events, and the easiest to see, are the collisions between supermassive black holes at the centre of galaxies. So an important question is how often these events occur. Today, Sean McWilliams and a couple of pals at Princeton University say that astrophysicists have severely underestimated the frequency of these upheavals. Their calculations suggest that galaxy mergers are an order of magnitude more frequent than had been thought. Consequently, collisions between supermassive black holes must be more common too. That has important implications. The evidence that McWilliams and co rely on comes from various measurements of galaxy size and mass.

That raises an interesting prospect—that the supermassive black holes at the centre of these galaxies must be colliding more often. Liquid spacetime: A very slippery superfluid, that's what spacetime could be like. What if spacetime were a kind of fluid? 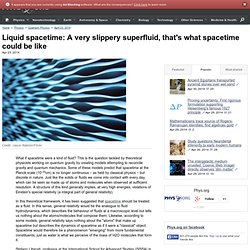 This is the question tackled by theoretical physicists working on quantum gravity by creating models attempting to reconcile gravity and quantum mechanics. Some of these models predict that spacetime at the Planck scale (10-33cm) is no longer continuous – as held by classical physics – but discrete in nature. Just like the solids or fluids we come into contact with every day, which can be seen as made up of atoms and molecules when observed at sufficient resolution. The Beginning of Time - Stephen Hawking. Black holes do not exist where space and time do not exist, says new theory. (Phys.org) —The quintessential feature of a black hole is its "point of no return," or what is more technically called its event horizon. 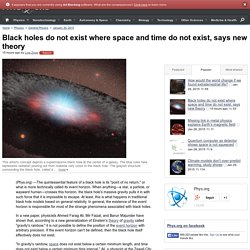 When anything—a star, a particle, or wayward human—crosses this horizon, the black hole's massive gravity pulls it in with such force that it is impossible to escape. At least, this is what happens in traditional black hole models based on general relativity. In general, the existence of the event horizon is responsible for most of the strange phenomena associated with black holes. In a new paper, physicists Ahmed Farag Ali, Mir Faizal, and Barun Majunder have shown that, according to a new generalization of Einstein's theory of gravity called "gravity's rainbow," it is not possible to define the position of the event horizon with arbitrary precision. If the event horizon can't be defined, then the black hole itself effectively does not exist. Interactive: What Is Space? In 1915, Albert Einstein’s field equations of gravitation revolutionized our understanding of space, time and gravity. 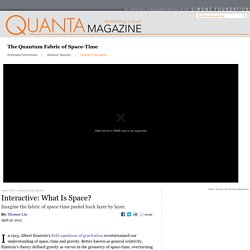 Better known as general relativity, Einstein’s theory defined gravity as curves in the geometry of space-time, overturning Isaac Newton’s classic theory and correctly predicting the existence of black holes and gravity’s ability to bend light. But a century later, the fundamental nature of space-time remains shrouded in mystery: Where does its structure come from? What do space-time and gravity look like in the subatomic quantum realm? The short answer is that we don’t know. Theoretical physics: The origins of space and time. “Imagine waking up one day and realizing that you actually live inside a computer game,” says Mark Van Raamsdonk, describing what sounds like a pitch for a science-fiction film.

But for Van Raamsdonk, a physicist at the University of British Columbia in Vancouver, Canada, this scenario is a way to think about reality.