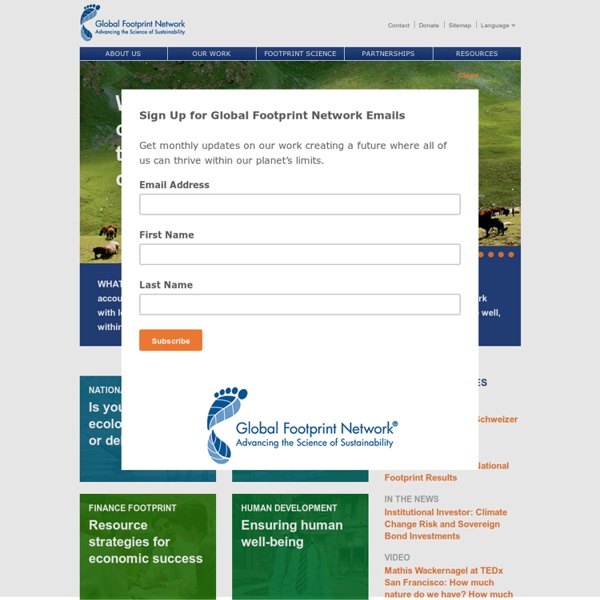 Global Footprint Network is an international think tank working to advance sustainability through use of the Ecological Footprint, a resource accounting tool that measures how much nature we have, and how much we use. This tool is unique in making overshoot measurable – through detailed resource accounts for nations, cities and individuals. By working with governments, investors and opinion leaders we demonstrate the advantages of making ecological limits central to decision-making. During our ten-year history, we’ve engaged with 57 national governments on six continents with one overarching goal: that all people live well, within the means of one planet.

Videos Hans Rosling explains a very common misunderstanding about the world: That saving the poor children leads to overpopulation. Not only is it not right, it’s the other way around! The world might not be as bad as you might believe! Don’t Panic – is a one-hour long documentary produced by Wingspan Productions and broadcasted on BBC on the 7th of November 2013. The visualizations are based on original graphics and stories by Gapminder and the underlaying data-sources are listed here. Tandem silicon-perovskite solar cells could provide solar power on the cheap By combining silicon solar cells with their cheap and efficient perovskite-based counterparts, researchers at Stanford and MIT are creating a new type of "tandem cell" that could reach efficiencies up to 35 percent. Out of all the solar cell technologies discovered so far, perovskite certainly takes the cake as the fastest-growing and one of the most promising for the future. In just a few years of development, perovskite-based cells have gone from efficiencies in the low single digits to a respectable 20 percent. The more traditional silicon based single-junction cells are still in the lead on the efficiency front, but progress has slowed to a crawl as their output approaches the theoretical maximum.

Ecological footprint (Human) ecological footprint is a measurement of anthropogenic impact on earth. Two fields of science scope human impact on Earth; they are geospheric and biospheric sciences. Human activity is measured through ecological footprint research. Our activity is now the leading cause of climate change. [1] Our impact is now threatening total global collapse. [2] [3] Since the 1950s the human footprint has grown so massive that it has caused Earth to enter into an new geological epoch called The Anthropocene.[4] Biosphere Measurements[edit] The EcoTipping Points Project Long famous for its cathedral, university, and cuckoo clocks, Freiburg is now also famous as a “Green City.” It excels in the areas of transportation, energy, waste management, and land conservation, and has created a green economy that perpetuates even more environmental progress. Photo: Courtesy Freiburg Wirtschaft Touristik u.

COTAP's Carbon Footprint Calculator: Quick, Thorough, & Accurate. Offsetting your carbon footprint with COTAP creates income for the world’s poorest people while also counteracting your unavoidable contribution to climate change. Where Your Money Goes Your tonnes will be evenly allocated to our projects and you will receive a detailed offset acknowledgement like this one. Your tonnes will be included in our public carbon credit retirements on the Markit Environmental Registry like this.

Living Planet Report The Living Planet Report is the world's leading, science-based analysis on the health of our planet and the impact of human activity. Knowing we only have one planet, WWF believes that humanity can make better choices that translate into clear benefits for ecology, society and the economy today and in the long term. This latest edition of the Living Planet Report is not for the faint-hearted. One key point that jumps out is that the Living Planet Index (LPI), which measures more than 10,000 representative populations of mammals, birds, reptiles, amphibians and fish, has declined by 52 per cent since 1970.

Where Do You Belong? 20 Videos Exploring Geography : KQED Education Homeland: Immigration in America/Nine Network By Sarah Bremer My students carry GPS-enabled devices (smart phones) in their back pockets and view paper maps as artifacts from a distant past. Exxon: The Road Not Travelled - Inside Cllimate News In 1981, 12-year-old Laura Shaw won her seventh-grade science fair at the Solomon Schechter Day School in Cranford, N.J. with a project on the greenhouse effect. For her experiment, Laura used two souvenir miniatures of the Washington Monument, each with a thermometer attached to one side. She placed them in glass bowls and covered one with plastic wrap – her model of how a blanket of carbon dioxide traps the reflected heat of the sun and warms the Earth.