Social Mining Tools. Social network analysis. 2009.BL.InternetFootprint. The Web Means the End of Forgetting. The evolution of the Web and implications for eResearch. Abstract The hypertext visionaries foresaw the potential of richly interlinked global information systems for advancing human knowledge. 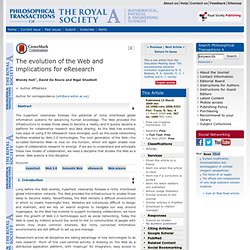 The Web provided the infrastructure to enable those ideas to become a reality, and it quickly became a platform for collaborative research and data sharing. As the Web has evolved, new ways of using it for eResearch have emerged, such as the social networking facilities enabled by Web 2.0 technologies. The next generation of the Web—the so-called Semantic Web—is now on the horizon, which will again enable new types of collaborative research to emerge. If we are to understand and anticipate these new modes of collaboration, we need a discipline that studies the Web as a whole. Keywords: 1. Long before the Web existed, hypertext visionaries foresaw a richly interlinked global information network. Researchers across all disciplines are taking advantage of new technologies to do new research.

Science Magazine: Sign In. Social Network Analysis and Mining, Volume 1, Number 1. Your Online Footprint. The CEO of Google has suggested that once you leave college, you may want to change your name to distance yourself from all the dumb things you did as a younger person and can’t erase from the Internet. 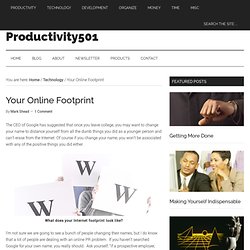 Of course if you change your name, you won’t be associated with any of the positive things you did either. What does your Internet footprint look like? I’m not sure we are going to see a bunch of people changing their names, but I do know that a lot of people are dealing with an online PR problem. If you haven’t searched Google for your own name, you really should. Ask yourself, “if a prospective employer, date, graduate school, business partner or life insurance underwriter saw these results would it help or hurt my chances?” Be careful what you post Obviously the best way to control what shows up on the web is to be careful what gets put up in the first place. Here are some tips for controlling what gets put on your permanent online record: Plan your online profile 1. Daqing-IEEE-Computer-2011-07. Intelligence_UIC2010_Invited. Journal of General Internal Medicine, Volume 25, Number 11. Digital footprint. Digital footprint refers to the traces of data that are left behind by users on digital services. [1] There are two main classifications for digital footprints: passive and active. 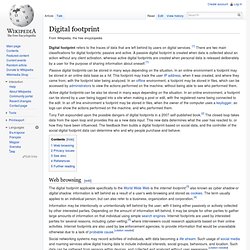 In an online environment a footprint may be stored in an online data base as a hit. This footprint may track the user IP address, when it was created, and where they came from; with the footprint later being analyzed. In an offline environment, a footprint may be stored in files, which can be accessed by administrators to view the actions performed on the machine, without being able to see who performed them. Web browsing[edit] Privacy issues[edit] See also[edit] What your emails say about you. The Final Cut (2004 film) The Final Cut is a 2004 film written and directed by Omar Naim. 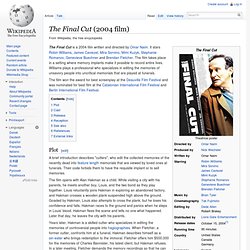 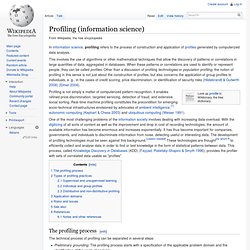 The technical process of profiling can be separated in several steps: Data collection, preparation and mining all belong to the phase in which the profile is under construction. Young warned over social websites. Millions of young people could damage their future careers with the details about themselves they post on social networking websites, a watchdog warns. 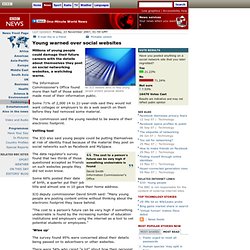 The Information Commissioner's Office found more than half of those asked made most of their information public. Some 71% of 2,000 14 to 21-year-olds said they would not want colleges or employers to do a web search on them before they had removed some material. The commission said the young needed to be aware of their electronic footprint. Vetting tool. Online vetting. Online vetting, also known as cyber-vetting[1] is increasingly being used by potential employers and other acquaintances to vet people's online presence or "internet reputation" ("netrep")[2] on social network services such as Facebook, MySpace, Twitter, Bebo, and LinkedIn. 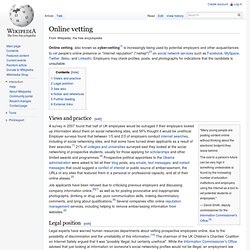 Employers may check profiles, posts, and photographs for indications that the candidate is unsuitable. Views and practice[edit] "Many young people are posting content online without thinking about the electronic footprint they leave behind. The cost to a person's future can be very high if something undesirable is found by the increasing number of education institutions and employers using the internet as a tool to vet potential students or employees. " A survey in 2007 found that half of UK employees would be outraged if their employers looked up information about them on social networking sites, and 56% thought it would be unethical. Legal position[edit]