What is Sustainable Development? 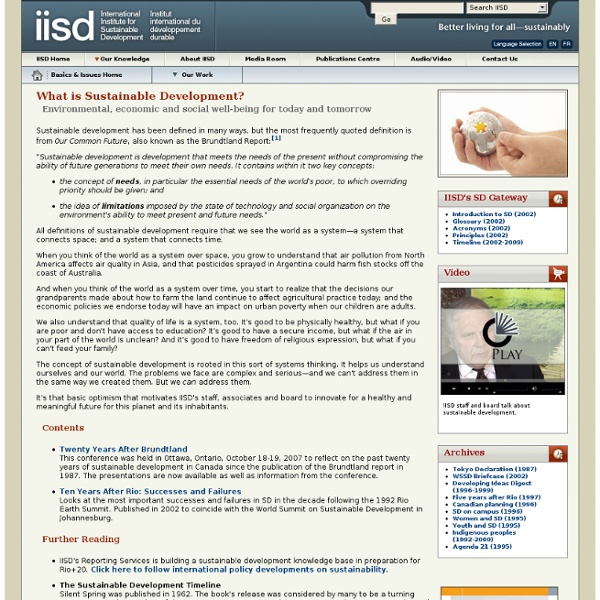 World Bank on What is Sus.Dev? There are many definitions of sustainable development, including this landmark one which first appeared in 1987: "Development that meets the needs of the present without compromising the ability of future generations to meet their own needs." — from the World Commission on Environment and Development’s (the Brundtland Commission) report Our Common Future (Oxford: Oxford University Press, 1987). But what does this mean? Have you listed any needs that conflict with one another? How do we decide whose needs are met? The Long and the Short of It People concerned about sustainable development suggest that meeting the needs of the future depends on how well we balance social, economic, and environmental objectives--or needs--when making decisions today. What social, economic, or environmental needs would you add to the puzzle? Many of these objectives may seem to conflict with each other in the short term. Studying the puzzle raises a number of difficult questions. Going Further

Safe and Just Space for Humanity Q&A: NGOs Must Play Key Role in Rio+20 Summit on Sustainable Development UNITED NATIONS, Aug 26, 2011 (IPS) - As the United Nations readies for a major international conference on sustainable development next June in Brazil, non-governmental organisations (NGOs) are preparing to play a key role in the run-up to the summit meeting and are preparing a plan of action to be adopted by world leaders. The Rio+20 conference will take place 20 years after the historic Earth Summit in Brazil in June 1992. Asked about the importance of NGO contributions, Michael G. Renner, senior researcher at the Worldwatch Institute told IPS, "I think the answer is still outstanding. He said NGOs need to make sure that the conference is not seen as disconnected from people’s daily concerns. A series of NGO meetings are scheduled to take place in the coming months, including one sponsored by the U.N.’s Department of Public Information in Bonn, Germany, Sep. 3-5. They also need to ensure that the conference is not an isolated event. Excerpts from the interview follow: Q: The U.N.

IBON on SDGs: We need alternative development vision after 2015 | RIGHTS FOR SUSTAINABILITY INITIATIVE Paul Quintos of IBON International speaks at a Rio+20 side event. Photo courtesy of IISD RIO DE JANEIRO, June 15, 2012 — Rights for Sustainability (R4S) delegate and IBON International program manager Paul Quintos at a Rio+20 side event put forward the case for a transformative development agenda to replace the Millennium Development Goals (MDGs). Quintos appeared alongside speakers from the United Nations Development Program (UNDP), the International Trade Union Confederation (ITUC), Global Policy Forum Europe, and the United Nations Non-Government Liaison Service (UN-NGLS) at the event, which was organized by IBON International and the UN-NGLS. The event focused on the potential of “Sustainable Development Goals” (SDGs), an idea first tabled by Colombia and being debated at Rio+20. It is believed that SDGs could be the framework to replace MDGs when they expire in 2015.

Can we live inside the doughnut? Why the world needs planetary and social boundaries This blog summaries a new Discussion Paper published by Oxfam. It does not represent Oxfam policy, but is intended to encourage public debate in the run-up to the UN conference on sustainable devolpment (Rio+20) in June. When crossing unknown territory, a compass can be pretty handy. Achieving sustainable development for nine billion people has to be high on the list of humanity’s great uncharted journeys. So here’s an idea for a global-scale compass to point us in the right direction (Fig 1). Fig 1. Source: Oxfam, inspired by Rockström et al (2009) What’s going on here? Putting excessive stress on these critical processes could lead to tipping points of abrupt and irreversible environmental change, so Rockström et al proposed a set of boundaries for avoiding those danger zones. That’s a compelling approach to environmental sustainability, but humanity is glaringly absent from the picture. So how about combining planetary boundaries together with the concept of social boundaries? 1. 2.

5 Reasons Mobile Is the Future of Sustainable Development Social media and technology hold a unique position when it comes to shaping sustainable solutions for the future or our planet. At the core of many of these possibilities for change are mobile phones. There are now 6.2 billion mobile phone subscriptions held by 4.2 billion mobile subscribers around the world — and that number is only increasing. By 2017, Ericsson forecasts 9 billion mobile subscriptions. As mobile continues its rapid run toward global adoption, more people will access the Internet solely through mobile devices. Mobile phones are even replacing paper money, helping to provide a check on authority and improving rural health standards. This week, government and thought leaders are convening in Rio de Janeiro to discuss the future of sustainable development. Mobile phones are at the heart of many of these solutions. 1. “Mobile phones in the health space feels like the Internet and ecommerce in 1994 and 1995,” says Paul Ellingstad, HP’s director of global heath. 2. 3. 4. 5.