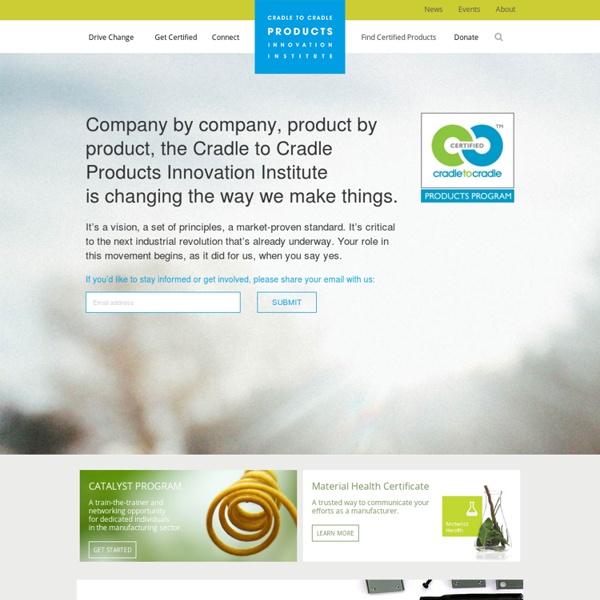 The program guides continual improvement towards products that are: - made with materials that are safe for humans and the environment - designed so all ingredients can be reused safely by nature or industry - assembled and manufactured with renewable, non polluting energy - made in ways that protect and enrich water supplies, and - made in ways that advance social and environmental justice What makes your product "sustainable"? How do important audiences know for sure? Certified Cradle to Cradle is rigorous. The Cradle to Cradle CertifiedTM Products Program is comprehensive and rigorous. It requires a paradigm shift in thinking about how a product is designed, what it contains, how it is made, and where it goes after use.

Europe’s circular-economy opportunity Adopting circular-economy principles could not only benefit Europe environmentally and socially but could also generate a net economic benefit of €1.8 trillion by 2030. Europe’s economy has generated unprecedented wealth over the past century. Part of the success is attributable to continuous improvements in resource productivity—a trend that has started to reduce Europe’s resource exposure. At the same time, resource productivity remains hugely underexploited as a source of wealth, competitiveness, and renewal. C2C: Cradle-to-Cradle « givingbackmore A system of safety. A system of sustainability. A system of reusing, recycling, and renewing. This is the Cradle-to-Cradle system. Copyright Zhiying.lim 21 August 2012 This is an idea for industrial products which involves using materials from two different categories: Technical nutrients (which is limited to non-toxic/harmful materials that can be reused continuously without losing quality), and Biological nutrients (which can be disposed and decompose into soil).

Where sustainability is business as usual IKEA makes informed choices As the Airbus A 380 majestically descends down to the Kastrup airport in Copenhagen, Denmark, you are greeted by the clear light blue sky above and the dark blue water below, dotted by offshore wind farms like little pearls bobbing in the sea. The sight confirms you have entered the Nordic countries. Sensing the Inevitable, Companies Begin to Adapt to Climate Change Most have yet to incorporate climate change into their business plans, but a few are finding a way. Download PDFUnlock the Full Report This article is part of the July / August 2016 Business Report, Climate Change. View the full report Top Ten Sustainability Initiatives of Microsoft Microsoft Corporation, just known as Microsoft to the masses, is a multinational corporation headed up in the United States and is known for the development, manufacturing, support, and licensing of a broad range of services and products relating to the computer industry. Aside from its operating system and Microsoft Office supplies, it is known for the manufacturing of a number of consumer electronics, including the Xbox and Xbox 360, Zone, Windows Phone OS, and MSN. Microsoft is also extremely big with its environmental sustainability efforts. Greenpeace has listed Microsoft at number 17 in the list of Guide to Greener Electronics. Microsoft has employed a number of sustainable initiatives when it comes to facilities, transportation, and a number of other items.

The Degrowth Paradigm - Home The degrowth movement is a relatively new contender in the economic and political debates that swirl around humanity's future. Degrowthers believe we need a more modest and sane alternative to the constant pressures of expansion that are destroying the ecological basis of our existence. Author and essayist Richard Swift explores the degrowth alternative, in theory and in practice. **This episode originally aired December 13, 2013. "Growth has become an element of faith. It's so deeply ingrained into our cultural narratives.